Mahindra Chairman Emeritus Keshub Mahindra may have retired, but his legacy continues to steer the company 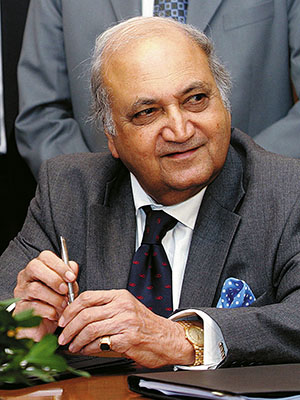 In May, when Keshub Mahindra expressed his desire to step down as the chairman of group flagship Mahindra & Mahindra, few company watchers were surprised. After all, Mahindra, who had been chairman for 48 years, had shown some signs of slowing down.

Still, the elder Mahindra’s shadow lurks over Mahindra Towers, the group’s headquarters in Mumbai’s mid-town Worli. He retains the title of chairman emeritus, and nephew Anand, who took over the reins in 1997 from him, defers to him on certain issues.

The reticent Keshub Mahindra grants few interviews. The only time you could hear him speak in public was at the annual general meetings at Mahindra & Mahindra. He attended his last AGM in August, after which he retired.

On the business side as well, there’s no doubt that Mahindra has left behind a strong legacy. In 1947, when he started at the company, its main business was manufacturing the iconic Willys Jeeps. From there to the conglomerate that Mahindra & Mahindra is today, is all thanks to Mahindra Senior’s ability to delegate. He is known to have not bothered with the nitty-gritties of everyday tasks in running a business. His eyes were always on the big picture, according to someone who has seen the group over the last two decades.

Mahindra also had a knack of forming joint ventures. Perhaps the only blemish in his career comes from a 2010 lower court conviction in the Bhopal gas leak case. Mahindra served as non-executive chairman of Union Carbide India when one of the world’s biggest industrial disasters took place there in 1984.

Today, Mahindra & Mahindra is a well-diversified conglomerate with interests spanning automobiles, defence and energy. Its automotive arm, one that is very dear to Mahindra, has done particularly well in the last year.

With petrol prices rising, its diesel SUVs and MUVs have sold like hot cakes. Last year, the group clocked Rs 37,026 crore in revenue. It stands valued at over Rs 75,000 crore.

At present, Mahindra spends most of his time looking into philanthropic causes he supports. He’s the chairman of the Mahindra Foundation and was director on the board of Pratham. Those who know him say he’s most passionate about education and the KC Mahindra Education Trust, which grants scholarships across a wide range of categories, is dearest to him. Since it was set up in 1963, the Trust has recorded 83,245 beneficiaries through grants, loans and scholarships. Mahindra has also established the United World College in Pune.