Neither reigning champion is participating, but there are plenty of incredible competitors starting their quests for a Grand Slam title, including Naomi Osaka and Novak Djokovic 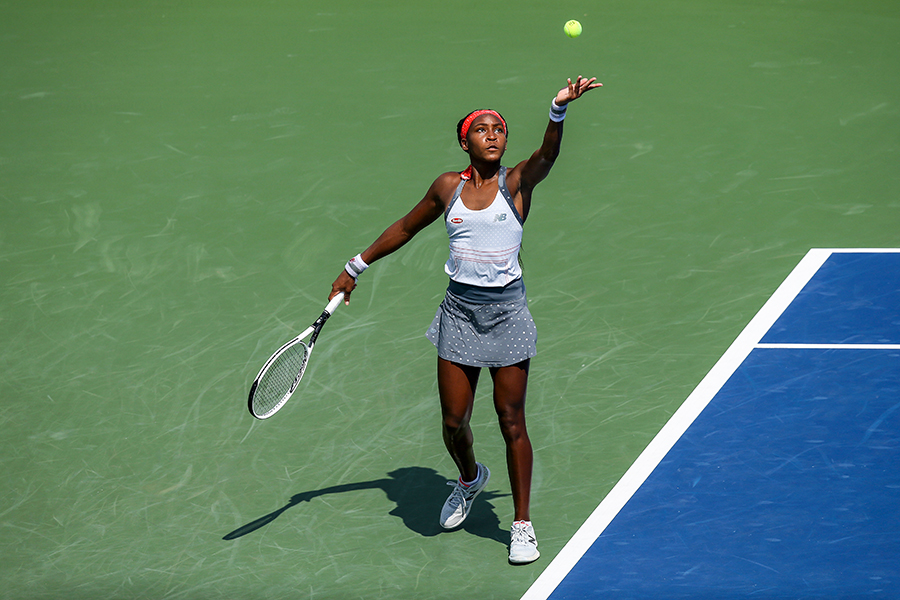 NEW YORK: Cori (Coco) Gauff of the United States serves the ball against Maria Sakkari of Greece during their Women's Singles First Round match on day three of the 2020 Western & Southern Open at USTA Billie Jean King National Tennis Center on August 22, 2020  in the Queens borough of New York City. (Photo by Matthew Stockman/Getty Images)

How to watch: From noon to 6 p.m. Indian Standard Time (IST) on ESPN, and from 3:30 am to 8:30 am. on ESPN2; streaming on ESPN+ and ESPN3.
The U.S. Open singles competitions start on Monday with neither reigning champion participating. Still, there are plenty of incredible competitors starting their quests for a Grand Slam title, including Naomi Osaka and Novak Djokovic. Matches to Keep an Eye On Because of the number of matches cycling through courts, the times for individual matchups are at best a guess and certain to fluctuate based on the completion time of earlier play. All times are Eastern. Arthur Ashe Stadium, 10:30 p.m. at earliest: Kevin Anderson vs. Alexander Zverev Anderson, a finalist at the U.S. Open in 2017, missed last year’s competition as part of a lengthy struggle with injuries. He was ranked fifth in 2018, but is now outside the top 100. Last week, at the Western & Southern Open, Anderson beat Kyle Edmund, the world No. 44, in three sets before losing to Stefanos Tsitsipas in the second round. His powerful serves and groundstrokes can still allow him to press toward the net and control points. Zverev, the fifth seed, has beaten Anderson all five times they have played, including three times on hard courts in the United States in the summer. But Zverev has struggled with his serving over the last year. He lost to Andy Murray last week, and double-faulted three times while serving for the match in the third set. Court 17, 2 p.m.: Anett Kontaveit vs. Danielle Collins The unseeded Collins made the semifinals at the Australian Open last year but had a hard time following that success, reaching only the second round at the U.S. Open. At the beginning of 2020, she rebounded, beating Elina Svitolina, Sofia Kenin and Belinda Bencic during the Australian swing of the WTA season. Collins’ aggressive style is suited to hard courts, and her powerful baseline game transitions well to the net. Kontaveit, who became the first Estonian, male or female, to reach a Grand Slam quarterfinal at this year’s Australian Open, is a similar player to Collins. The 14th-seeded Kontaveit’s main weapon, an incredibly varied serve, is particularly effective in forcing weak returns. Louis Armstrong Stadium, 10:30 p.m.: Denis Shapovalov vs. Sebastian Korda In his short career, the 21-year-old Shapovalov, the No. 12 seed, has not been knocked out of the U.S. Open before the third round. He possesses one of the best one-handed backhands in the game, with incredible shotmaking ability and power. Korda, who received a wild card, is a promising young American player. He is the son of the Czech players Petr Korda, who won the Australian Open in 1998, and Regina Rajchrtova, who competed in the 1988 Summer Olympics. In 2018, Sebastian Korda won the junior singles title at the Australian Open, but this U.S. Open will be his first appearance in the main draw of a Grand Slam event. Louis Armstrong Stadium, 12:30 a.m.: Coco Gauff vs. Anastasija Sevastova Gauff, just 16, is remarkably mature on and off the court. After a breakout year in 2019, she has shown no signs of slowing her ascent into the top echelons of the tennis world. At the Australian Open, she defeated the defending champion, Naomi Osaka, in the third round before losing to the eventual champion, Sofia Kenin. In this draw, she faces yet another seeded player in the first round. Sevastova, seeded No. 31, reached the semifinals at the U.S. Open in 2018. Her game is comparable to Gauff’s in that she does not have one shot with which to overpower her opponents; she seeks weaknesses in them and craftily constructs points to exploit those weaknesses. A Plan for Juggling the Matches Starting at 8:30 p.m. IST on ESPN+, I will split-screen Angelique Kerber’s match at Louis Armstrong Stadium with Diego Schwartzman’s on Court 5. While both are heavy favorites, they are pleasant to watch. Next, viewers on ESPN will probably be directed to the Anderson-Zverev match, but I will watch Shapovalov face Korda instead. Anderson and Zverev tend to play long matches, so I will go back to it between checking other courts. At 12:30 a.m., I will, like most American viewers, be clamoring to watch Gauff. Hopefully, by the end of that match, Kontaveit and Collins will just be starting, although I will attempt to give some of my attention to Dayana Yastremska on Court 8. A 20-year-old Ukrainian, she had a breakthrough year in 2019. Now that she is working with renowned coach Sascha Bajin, it is possible that her offense-focused style will start coalescing and become consistent, with fewer unforced errors. At the end of the night, as ESPN gives way to ESPN2, both 2018 champions, Novak Djokovic and Naomi Osaka, will return to Arthur Ashe Stadium. While watching them, I will try to keep an eye on the last match on Court 17, between Reilly Opelka and David Goffin. Opelka is the quintessential big man, with a powerful serve designed to be unbreakable. Goffin is much more intricate in his play, with point construction his major strength. It promises to be more interesting than the lopsided beatdowns we have come to expect from first-round matches featuring players at the top of the draw.

Tweets by @forbes_india
Innovura Entertainment, an Independent Music Label on it's journey from start to stardom
Jeffrey Oboite discovers the missing link to financial freedom