The current funding round was led by Alibaba Group, Foxconn and SoftBank 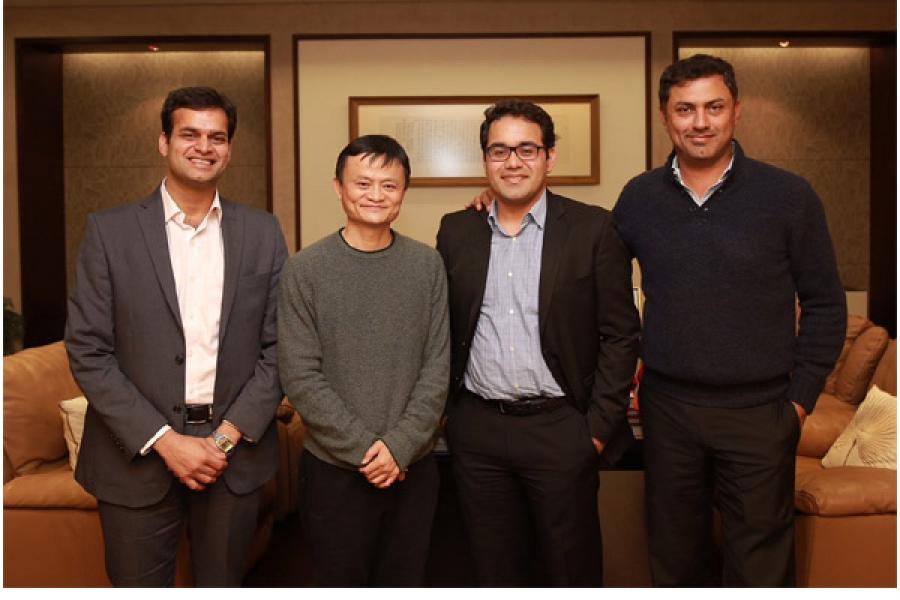 (L-R)Rohit Bansal, Co-founder, Snapdeal, Jack Ma, founder and Executive Chairman of Alibaba Group, Kunal Bahl, CEO and Co-founder, Snapdeal and Nikesh Arora, Vice Chairman, SoftBank
Online marketplace player Snapdeal today said it has raised $500 million in its latest round of funding led by Chinese ecommerce major Alibaba Group, Taiwanese electronics manufacturer Foxconn and Japan’s SoftBank. Existing investors Temasek, BlackRock, Myriad and PremjiInvest also participated in the fresh round of funding.
Started in February 2010, New Delhi-based Snapdeal is one of India’s first ecommerce companies to adopt a marketplace model, which is now the preferred model in the sector over the traditional inventory-based business. With over 150,000 sellers on its platform and more than 15 million products, Snapdeal currently reaches over 5,000 cities and towns across the country.
Kunal Bahl, co-founder and CEO of Snapdeal, said, “With global leaders like Alibaba, Foxconn and SoftBank, in addition to our other existing partners supporting us, our efforts towards building India’s most impactful digital commerce ecosystem will be propelled further, enabling us to contribute towards creating a Digital India.” The company did not divulge further details of the transaction.
Last year, Snapdeal raised three rounds of funding. This included Japanese telecom and media group SoftBank Corp investing $627 million in the company in October 2014. The online retailer also raised $233.7 million in two rounds from eBay Inc, Temasek Holdings Pvt Ltd, Blackrock Inc and PremjiInvest. Ratan Tata, former Tata Group chairman, also has a small stake in the company.
Flush with funds, Snapdeal has made substantial investments to strengthen its mobile business in the last few months. In April this year, it acquired FreeCharge, a mobile recharge platform, for an undisclosed sum. In the following month, it acquired Hyderabad-based MartMobi, a mobile ecommerce platform, to augment its mobile commerce capabilities. Financial details of the deal were not revealed. Earlier it has acquired companies such as Exclusively.in, a fashion portal, GoJavas, a logistics firm, and RupeePower, a financial services firm.
Over the last two years, the intensity of competition has heightened in the Indian ecommerce space. And the fight for the top slot has evolved into a three-way tussle among global giant Amazon Inc, Bengaluru-based Flipkart and Snapdeal.
Backed by major global investors, ecommerce players are now vying for consumer mind space and wallet. But the lack of brand loyalty, coupled with the absence of any major differentiators in terms of services and offerings, is fast emerging as their biggest challenge.