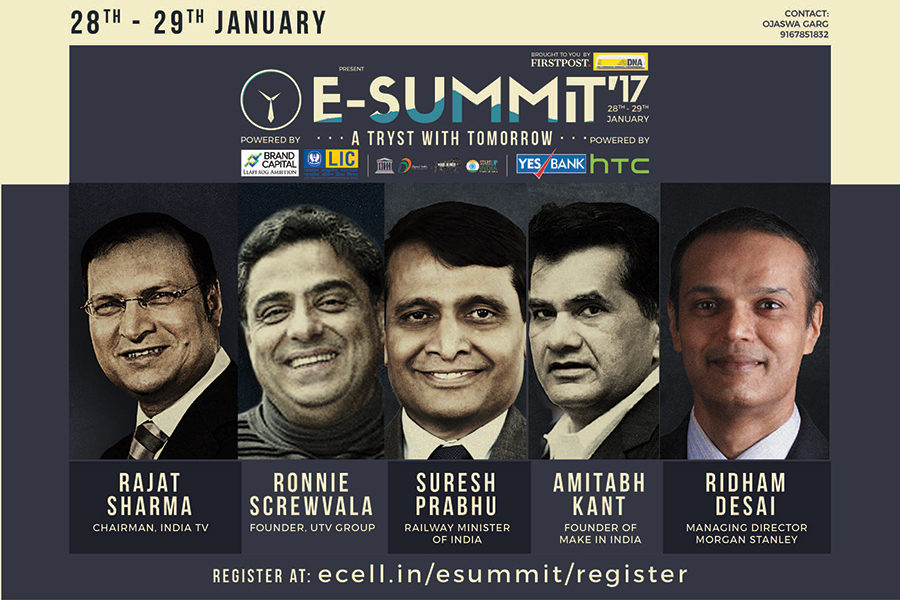 The hallowed portals of IIT Bombay have been known to breed as many innovative minds as it does impeccable engineers. The students here are known to diversify interests in fields apart from the core engineering fields and contribute to the society in multifarious non-traditional ways.

This year, E Summit 2017 is scheduled on the last weekend of January, 28-29th January. This year, E Cell shall be hosting the 11th edition of the E Summit, where speakers from close to 7 countries and entrepreneurs from across the world will be converging at IIT Bombay, a highlight in the entrepreneurial scene in not only India but also the whole of Asia. The previous editions of E Summit have been graced by Uber CEO Travis Kalanick, UIDAI chief Nandan Nilekani, Mr. Adi Godrej, patriarch of the Godrej clan and Yes Bank MD Rana Kapoor among the few renowned names.

With the high bar that E Summit has set for itself, one would think it impossible for it to surpass its previous editions. However, the lineup speaks otherwise. Here is a brief review of what this year’s E Summit holds for you:

The eminent speakers who will be delivering talks on a multitude of topics this E Summit include Union Railways Minister Suresh Prabhu, Chief Innovation Officer of DBS Neal Cross, Niti Aayog CEO Amitabh Kant, President (South Asia and India) of HTC Faisal Siddiqui and Rediff CEO Ajit Balakrishnan to name a few. In addition to this elite list of personalities, one of the prominent speakers this E Summit is Mr. Rajat Sharma, veteran journalist and a household name because of the critically acclaimed TV show ‘Aap Ki Adaalat’. Last but not least, UTV founder Ronnie Screwvala will be addressing the crowd on a melange of topics related to the entrepreneurship. If anything, one wouldn’t miss this year’s E Summit merely for a chance to interact with these successful personalities.

Apart from the stellar line up of speakers, there are many more exciting events happening at the summit, which not only reinforce the spirit and zeal of entrepreneurship, but also provide a fun-filled enriching experience to the attendees,

1. Eureka!
The finals of Eureka!, Asia’s largest Business Model Competition, will be traditionally held on the first day of E Summit ‘17. Eureka! is a year-long competition with entries pouring in the entire year. This year, E Summit has received 10000+ entries, which shall be competing for prizes worth INR 5 million.

2. The 10 Minute Million
Let’s face it – Getting financial backing is difficult. For most, it’s not a pleasant experience. We are trying to revolutionize this by exposing you to panellists who might back you with INR 1.5 Million in just 10 Minutes!

3. iHack 2017
At iHack, we bring together India’s best coders, developers, designers, innovators, creators and entrepreneurs of tomorrow. I Hack is geared up for those who are passionate about building, designing and innovating.

4. Start-up Expo
Start-up Expo provides a platform for innovative start-ups from all over the country to get in touch with thousands of potential customers and investors while attendees learn the technique of what made a start-up so big.

7. Business Conclave
An initiative targeted for professionals to give them updates about their specific industry by experts and also a platform to promote intra-networking.

8. Innovation Conclave
This Entrepreneurship Summit brings together the nation’s nonpareil speakers on innovation and the leading Indian innovators themselves. The conclave, featuring global TED speakers, is not only an amalgamation of a plethora of Innovations that arose because a problem needed to be solved,but also which has strong growth potential across various levels.

IIT Bombay is as pivotal to the development of India’s Powai Valley as Stanford to Silicon Valley. And E-Summit is a step forward in the celebration of this symbiosis.
So book your dates on the 28th and 29th of January by registering at ecell.in/esummit.