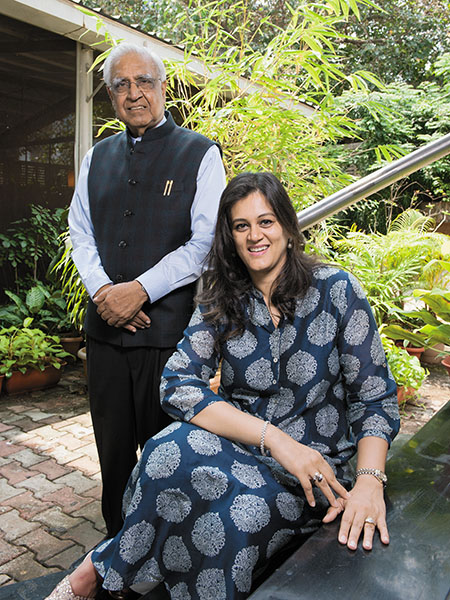 Datamatics chairman Lalit Kanodia (left), and Wakency business head Anju Kanodia
Image: Mexy Xavier
It was December 2004. Carly Fiorina, former chief executive officer of Hewlett-Packard, in one of her speeches at San Francisco, spoke about the real essence of ‘numbers’. One must, she asserted, transform data from passive to active, and from static to dynamic. “The goal is to transform data into insight,” she said.

Back in Mumbai, Anju Kanodia, 40, seems to have taken a leaf out of Fiorina’s data speak. A KPMG report in 2017, she points out, pegged the temporary staffing sector in India to grow by 74 percent in four years to reach $5.3 billion. An overwhelming percentage of this industry—nearly 80 percent—is unorganised. Anju Kanodia is daughter-in-law of Lalit Kanodia, founder of Mumbai-headquartered IT software firm Datamatics, and part of the initial team which set up Tata Consultancy Services (TCS) in 1967. She dishes out more data: Gig economy—characterised by temporary, flexible and contractual jobs as opposed to permanent ones—in India has the potential to grow up to $20-30 billion by 2025.

According to a survey by Flexing It, an online marketplace that concentrates on hiring for skill-based freelancers, over a third of the 500-plus organisations in India expect to rely on flexible talent up to 50 percent in the next five years.

Kanodia, for her part, is trying to turn this data into insight by rolling out the first consumer-facing business of Datamatics. Billed as India’s first on-demand flexible work community, for part-time, freelance and short-term jobs and gigs, Wakency—launched last August—lets users get their preferred job at their own time and place.

“Wakency is an Uber for jobs,” says Kanodia, explaining how Wakency’s proprietary technology—‘MatchWaker’—utilises machine learning and artificial intelligence to match employers and job seekers based on their preferences. Candidates share their work preferences like timings, place and days availability, enter their skills, qualifications and work experience, and get notified on part-time jobs, freelance assignments and short-term projects. Fast growth of the service sector, increased adoption of technology across industries, and focus on cost reduction have led organisations and recruiters to increasingly turn to temporary staffing, reckons Kanodia, business head of Wakency. 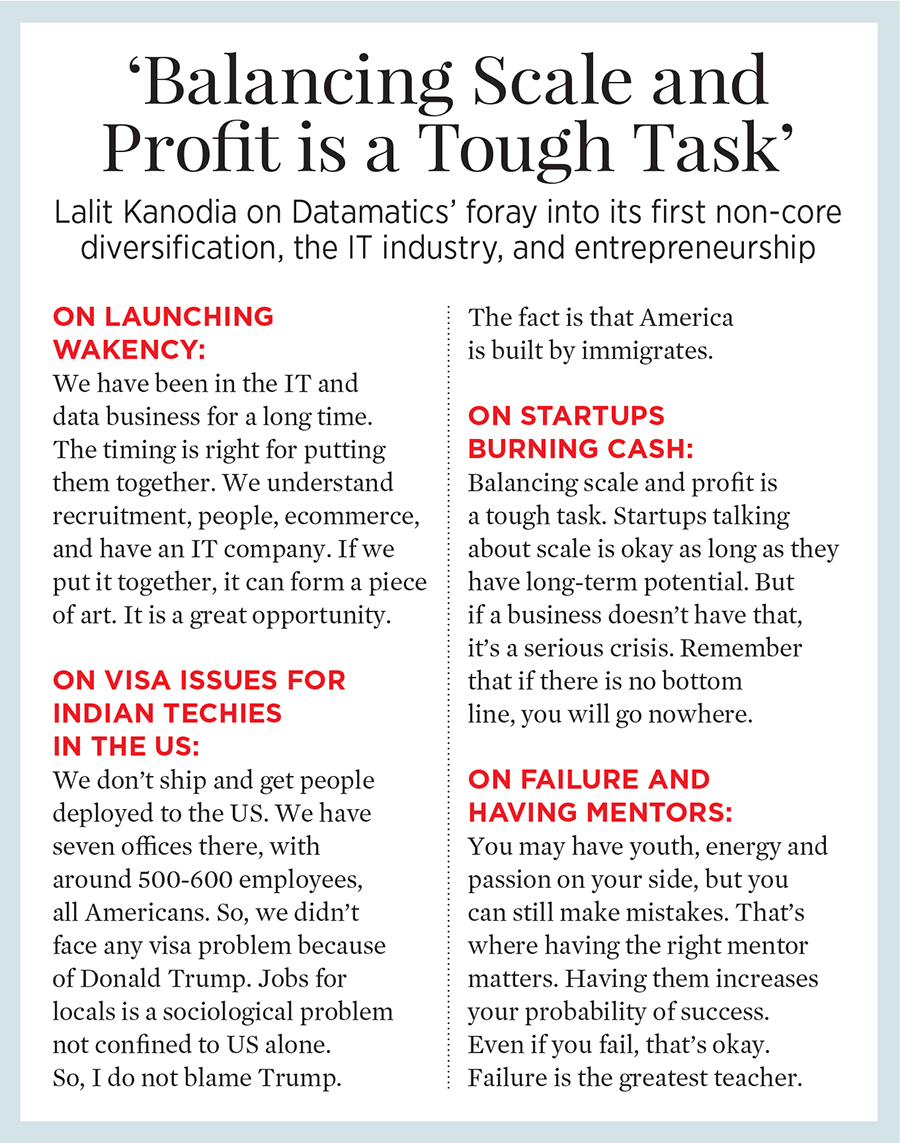 Though data played a role in formulating the new business venture, it was personal experience that acted as a trigger. Kanodia, who was part of the core team that managed the public listing of Datamatics in 2004, took a break a year later to focus on bringing up her two children. On returning to the workforce after a decade, she noticed a shift: Professionals were yearning to find flexible work opportunities fitting their schedule and availability. Options were not enough, though. “There was a huge gap in finding short-term jobs tailored to one’s convenience, skills and preferences,” she recalls. There was also need to find job options for a large segment of the working population that voluntarily opted out of full-time jobs due to social and family reasons. The timing, Kanodia contends, was ripe for an organised player to take a stab at this unsolved problem area.

Lalit Kanodia agrees. The share of working women in India, he asserts, is among the lowest in the world. “They are highly competent and qualified but are not employed properly as a resource,” he says. “We need to get them back.”

Aparna Khatri, 35, is one such professional who who has been working on a part-time basis. As a Human Resources (HR) director at a leading advertising agency in Mumbai, Khatri took a break in 2015 when she was expecting her first child. Now a mother of two, she cannot think of any conventional job that gives her the flexibility to work from home, with timings that suit her. “I chose to work for two hours each on weekdays, and easily managed to pull it off,” she says, explaining that this model works best not just for new mothers, but also for those who want to work at their convenience or take up one project at a time. Khatri plans to pursue this option even when her younger child, now one year old, starts going to school. “I would have more time to spend [with the kids]and can see them growing,” she says.

The gig economy trend has seen tremendous uptake globally, particularly in the US, where one in three workers are already freelancers and 50 percent of the population is likely to freelance by 2027. In fact, 66 percent of large companies are using freelancers and other gig workers to lower labour costs.

In India, millennials are the driving force behind the growing digital economy and their rise is redeﬁning  workplace culture. Millennials are looking for more work flexibility and their pool in the gig economy around the world continues to expand, reckons Anurag Malik, partner and India workforce advisory leader at EY India. Today, gig economy provides employment opportunities to software developers, creative and multimedia professionals, online sales and marketing professionals, writers, translators and data entry operators. “This employment model is expected to grow signiﬁcantly in the coming years,” Malik adds. 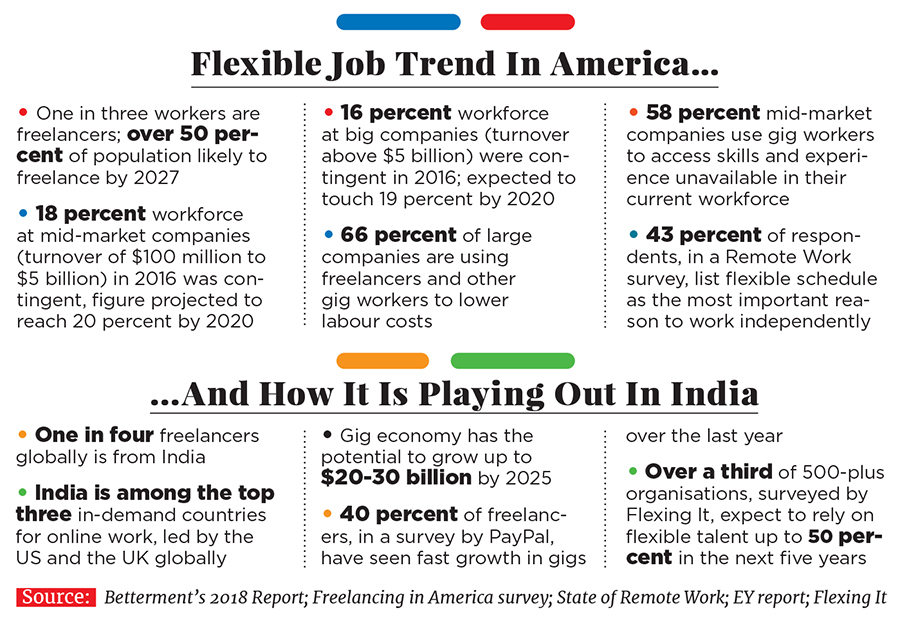 It’s not just employees who are driving this trend. There is a big demand pull from employers as well. According to the ‘India Temp and Contract Staffing Landscape 2018’ report by workplace solutions provider Kelly Services India and the Society for Human Resource Management (SHRM), 42 percent of the organisations surveyed indicated willingness to employ temp and contract staff. Top skills in demand are niche technology, administration, human resources, sales and marketing, logistics, legal, finance and accounts. Cost benefit, the report maintains, is the top motivator for hiring such staff. Organisations are moving towards filling temporary job vacancies in a cost-effective manner and, therefore, are adopting flexible staffing strategies. While flexi staffing was pioneered in the services industry, it has entered traditionally laggard sectors like manufacturing as well. Though the permanent workforce will always form the bedrock of any organisation, flexi staff will play a vital role in keeping it light on its feet and ready, the report concludes.

Meanwhile, Kanodia is exploring to enter more cities as Wakency gathers steam in Mumbai. It hasn’t been smooth sailing though. The biggest challenge, she points out, was Wakency’s biggest strength: First-of-its-kind job platform. “For many, it was initially a challenge to differentiate us from the universe of temporary staffing and work from home opportunities they’re exposed to,” says Kanodia. There was another issue to grapple with, this time from the employers’ side. A relatively new user behavior in recruitment and a novel approach to work was a cultural shift for some organisations. However, proprietary technology to match the on-demand hiring helped soothe nerves, she claims. “We intend to expand across the country by 2020, starting with key cities and moving into satellite ones and tier 2 towns,” says Kanodia.

Ask her about competition and the chances of big players like Naukri and others getting into such a form of hiring, Kanodia sounds confident. “We have the first-mover advantage,” she says, adding that the unique data handling capabilities of the parent company—Datamatics—will ensure that numbers are on the side of Wakency.

Tweets by @forbesindia
There has been a distinct change in business culture: Sanjeev Sanyal
Thoughts on being young