How Recykal is cleaning up the mess 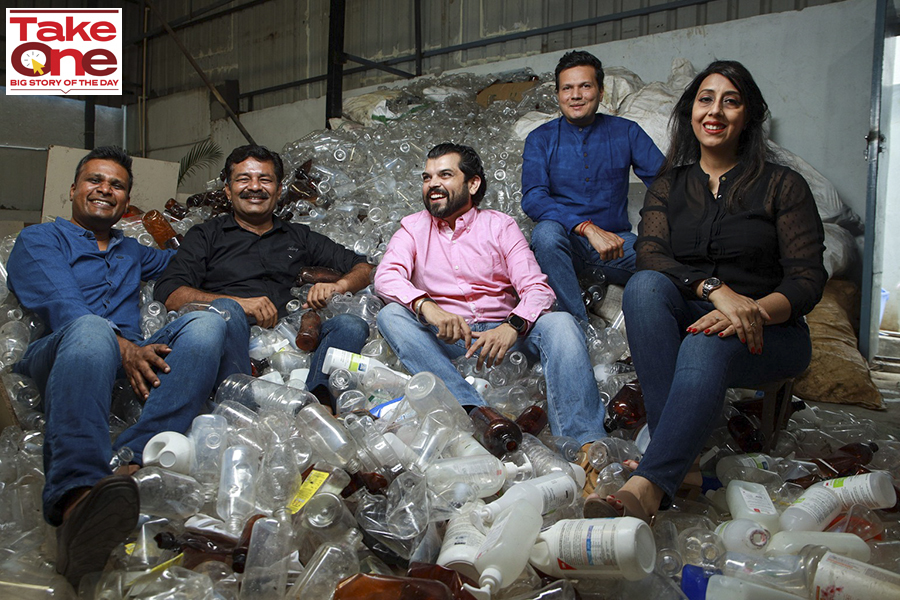 After he sold his second startup, a software-as-a-service (SaaS) called MartJack that helped brick-and-mortar retailers go online, to Singapore-based Capillary Technologies for an undisclosed sum in 2015—believed to be one of the largest SaaS transactions in Southeast Asia at the time—Abhay Deshpande could have chosen the good life. Settle down in a plush apartment, invest in a few startups and enjoy his hard-earned money. Instead, he chose the opposite: He deep-dived into what he calls “kachre ka kaam” or the business of trash. “After leaving Capillary in December 2016, we spent the first two years going to the kabadiwalas’ [junk or scrap dealer] and ragpickers’ houses to see what they do the whole day. Unless you go that deep, you will never understand their problems. We call it a Harvard diploma in waste management,” laughs Deshpande over a Zoom call. Bespectacled, moustached and middle-aged, he’s far from the slick, jeans-and-tee, new-age entrepreneur. Instead, he comes across as a seasoned player who’s been knocked around a few times.

Deshpande had no experience in waste management prior to plunging into the space, but went by “gut feel”. He wanted a large problem to solve for and trash checked that criterion: India generates 62 million tonnes of solid waste every year, according to a 2016 report by the Press Information Bureau. Rapid urbanisation, population growth and economic development will see this figure nearly triple of 165 million tonnes by 2030, and a staggering 450 million tonnes by 2045.   Currently, of the 62 million tonnes, about 43 million tonnes (70 percent) is collected. And of this, only 12 million tonnes is treated, while the remaining 31 million tonnes ends up in landfills and oceans.   The entire waste management industry in India, defined as the collection, transportation and disposal of garbage, sewage and other waste products, is worth $100 billion, says Deshpande. It’s cash-driven, largely informal and fragmented with multiple middlemen. “Waste management or w-commerce is 5x bigger than ecommerce and 10x bigger than m-commerce. India’s 1.3 billion people consume products and generate waste every single day. Waste never stops [getting generated]. It is a pandemic-free, recession-free business,” he says.

The fact that nobody focussed on the post-consumption market up until then provided further impetus to Deshpande. “Until 2016, India had seen lot of disruption in the pre-consumption and consumption market—Flipkart, Ola, Oyo, Zomato, Swiggy, MakeMyTrip etc. But nobody was focusing on post-consumption, that is waste. But, actually, there is nothing called waste because it is raw material for somebody else.” So in early 2017, along with co-founders Abhishek Deshpande (Abhay’s cousin), Anirudha Jalan, Ekta Narain and Vikram Prabakar, Deshpande went headlong into waste management.  While the team spent time on the ground with local ragpickers, kabadiwalas and small-time recyclers in Hyderabad, where the company is now headquartered, they simultaneously built a consumer app called Uzed. The B2C service would pick up consumers’ trash from their homes, pay them for it and have it delivered to nearby kabadiwalas and recyclers. Within two years, half a million consumers across Hyderabad and Pune had downloaded the app and the team was fulfilling 1,000 orders per day. But every transaction was a loss-making one. “Reverse logistics is time-consuming. Every order took us 45 minutes to one hour to complete given that we had to count and weigh the waste. Ecommerce deliveries in comparison take a couple of minutes to complete—you just go and drop off the parcel. We knew this from the outset, but we needed an entry point into the system, and this provided it,” says Deshpande.   In 2019, the team shifted focus to the B2B segment. Bulk waste generators like large corporations could with the click of a button on an app—called Recykal Marketplace—schedule a pick-up of their waste material from their premises. The local kabadiwala gets notified, goes on the premises and weighs the material. He then inputs the data into the app and takes the waste to his collection centre. “We don’t own these centres. We have merely tied up with local kabadiwalas, aggregators and recyclers and pay them for their services. We provide the tech and logistics to enable waste to get properly disposed. We are like the Uber for Trash,” says Deshpande. The corporate too gets paid via Recykal’s system.   The local kabadiwala then sells the material to recyclers via the marketplace. Recykal has also onboarded small kabadiwalas on to the system who would previously sell to larger aggregators. Through the app, they can skip the middlemen and sell directly to recyclers, earning an extra 10 percent. More recently, local ragpickers have also been brought into the fray where they too can directly bring their wares to the collection centre and sell it. Monies are paid directly into their bank accounts. Without the middlemen, they are able to make 20 percent extra, plus they become bankable in case they want to take a loan in the future. “It’s a win-win situation for every stakeholder in the value chain,” says Abhishek.   With growing concerns around ESG and sustainability goals, Recykal counts companies like Unilever, Coke, Pepsi, Infosys and Pidilite among its clients who can trace how their waste—which would otherwise end up in a landfill or ocean—is being disposed through the app. Recykal makes a marketplace fee for its services. 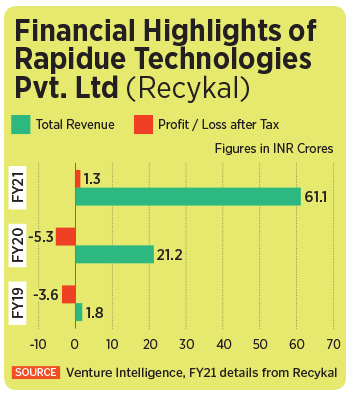 While the launch of Prime Minister Modi’s Swachh Bharat Mission in 2014 acted as a catalyst for Recykal’s business, creating awareness about waste disposal, says Abhishek, the real “game changer” was the Extended Producer Responsibility (EPR) regulation that the government mandated in 2017. Under EPR, a manufacturer must assume the cost of disposing its product after consumers are done using them. So if a potato chips maker uses 100 metric tonnes of plastic for packaging its wares, it must buy back 100 metric tonnes of plastic and dispose it off properly. The chips maker needn’t buy back the exact same packages its consumers used, but an equivalent quality and quantity of plastics.  In response, Recykal created EPR Loop—an app—which is today used by 100-plus brands to fulfil their EPR obligations. Take the case of Mars Incorporated, one of the leading manufacturers of dog and cat food. When the EPR rules came out, it was looking for a suitable partner to help ensure compliance and initially started working with a local waste management company in Hyderabad. “[But] we needed national presence and high technical capabilities to track our waste collection efforts and ensure precision in reporting to the Pollution Control Board. Recykal has built a user-friendly, easy-to-navigate tool. By using it, we are able to track the complete journey of our plastic waste from source to cement processing units where it is upcycled and used for energy generation. This kind of transparency and traceability are important for a responsible organisation like Mars,” says Vasudha Jha, corporate affairs director, Mars Petcare India. The EPR regulation, currently applicable to plastics and e-waste, has brought 20,000 companies across India into its fold and brought around $8 billion in 2020 into the space; that is expected to increase by 20 percent year-on-year. Besides, it’s helped formalise the sector which was otherwise fragmented, opaque and lacked traceability. “What demonetisation was to fintech companies, EPR was to the waste management companies,” says Deshpande. Today Recykal’s reach for waste collection and channelisation includes 1,000-plus businesses, 500 aggregators and waste management companies, over 150 recyclers, 1,000-odd kabadiwalas, 800-1000 ragpickers and 30 municipalities across 36 states and Union Territories. “Each stakeholder in the value chain has a different personality, different set of problems and different requirements. Revenues of the incorporated entity, Rapidue Technologies, shot up from Rs 1.8 crore in FY19 to Rs 21.2 crore in FY20. Losses went up marginally from Rs 3.6 crore in FY19 to Rs 5.3 crore in FY20, according to Venture Intelligence. Earlier everyone used to tell us, ‘Kachre mein kaun internet la sakta hai?’ It took us 2-3 years to win the stakeholders’ trust, but we’ve now found the right formula that brings value to each of them,” says Deshpande.   Investors concur: “Recykal is a forward-thinking amazing startup that is focussed on solving the teething issues in the space through cutting-edge technology. The team has expertise in solving practical problems and connecting various stakeholders in the value chain," says Akash Singh, investment manager at Circulate Capital, a Singapore-based investment management firm that invested an undisclosed sum in Recykal in December 2020. Prior to that, Recykal raised $2million in a Pre-Series A round in June 2019 led by Triton and Ajay Parekh, brother of Pidilite Chairman Madhukar Parekh. “Abhay is a seasoned entrepreneur who has been through a cycle of successfully growing and selling a business. He’s built an innovative, scalable business model with Recykal that not only delivers social impact but also financial returns,” says Ajay Parekh, director, Pidilite.   Last year, Recykal channelised 86,000 metric tonnes of waste through its system. At present the company is channelising 20,000 metric tonnes per month and is targeting a total of 300,000 metric tonnes of plastic and 40,000 metric tonnes of e-waste this year. “The vision is to do 3 million metric tonnes by 2025. That’s approximately 10-15 percent of India’s waste that will flow through our system rather than end up in a landfill or ocean. Ten more companies like ours can exist in the space. It’s that big a market. It’s not about building an app, it’s about building an ecosystem.”  Also watch: