Seldom have expectations run this high around a new government as it has been with the Narendra Modi-led National Democratic Alliance which took charge in May. Long burdened by slowing growth, mounting inflation and lack of speedy decision-making, India’s business community has been yearning to get a move on. And with a new government, there is an air of optimism and hope that the India growth story will once again become the subject of discussion not just within the country, but also across the world. 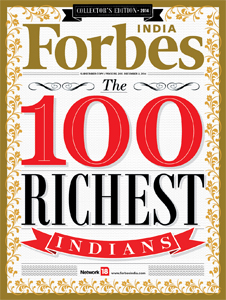 To be sure, the reality on the ground is yet to keep pace with this optimism. Industrial production is still a problem, overall economic growth is just beginning to show some signs of improvement and India is still way down in the pecking order on ease of doing business. For a large number of industrialists, though, there is hope that if the government gets cracking, the true potential of Indian business will be unleashed. Some give real change two years, others three, but the broad consensus is that India is beginning to get back on track.

It is this optimism, both within the business community and in the markets, that has led to all of India’s 100 richest turning billionaires this year, up from 65 last year. The cut-off level for the Forbes India Rich List this year is $1 billion, reflecting the manner in which the positivity in the markets has boosted the fortunes of India’s richest. Last year’s cut-off level was $635 million and, in 2009, the 100th Rich Lister’s wealth stood at $415 million. The total wealth of the 100 grew by a healthy 34 percent this year, powered by the 31 percent rise in the stock market in the past year.

This year’s Rich List also has a number of interesting facets. In a continuing trend, the wealth among the top 100 is getting increasingly democratised: The top 20, who used to contribute as much as 70 percent to the total wealth of the 100 in 2009, now bring in a much lower 58 percent, down from 62 percent last year.

With infrastructure getting a boost and a turnaround in fortunes in the automobiles sector, these two sectors are the highest gainers in the Rich List this year. Pharma, another big contributor to the billionaires list, continues to power on. Two significant changes in this year’s rankings are the emergence of Sun Pharma’s Dilip Shanghvi as the new number two on the list (toppling Lakshmi Mittal), and infrastructure baron Gautam Adani emerging as the biggest dollar gainer, surging 11 places.

This year’s Rich List issue is a veritable feast of information and we thoroughly enjoyed putting it together.

Tweets by @forbesindia
Peeping Into The Writer's Mind
Thoughts on Billionaires