The biennial motor show to be held in Delhi from February 5 to February 9, 2016, is expected to be the largest of its kind held in India ever 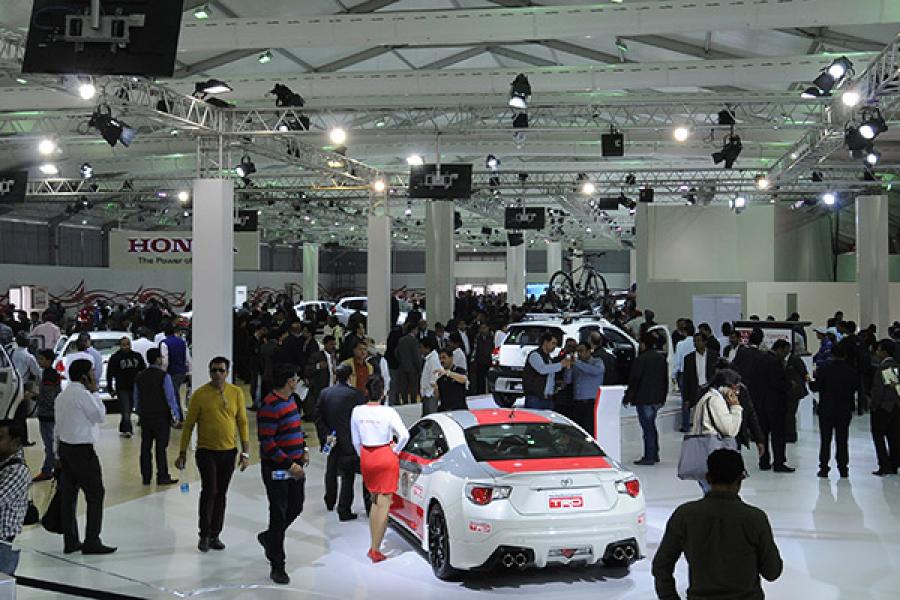 Image: Amit Verma
Indian and international bike manufacturers will be keen to show their prowess at the Auto Expo 2016 (Archived image: for illustrative purposes only)

Keeping the Indian auto sector relevant to emerging realities facing carmakers – ranging from a nascent revival in demand to leveraging technology for innovation and tackling environmental concerns – is the backdrop against which the 13th Auto Expo is being organised this year.

The biennial motor show to be held in Delhi from February 5 to February 9, 2016, jointly organised by the Society of Indian Automobile Manufacturers (SIAM), Automotive Component Manufacturing Association of India (ACMA) and the Confederation of Indian Industry (CII), is expected to be the largest of its kind held in India ever with over 70 product launches and 7 lakh visitors in attendance spread over the five-day gala.

Auto Expo 2016 is taking place at a very interesting time for the Indian automotive industry. In an encouraging sign, after four years of tepid demand for automobiles due to a sluggish economy, passenger vehicle sales grew by a little under 8 percent at 2.77 lakh units in 2015, though this was nowhere near the double-digit percentage growth witnessed by the industry in earlier years. Also, the rural distress the country is witnessing on account of two consecutive monsoon failures has impacted two-wheeler sales adversely. Commercial vehicle sales have also been tepid.

But just as the passenger vehicles sector appeared to be at the cusp of a turnaround, owing largely to positive sentiments on future economic prospects under a new government voted to power in May 2014, environmental concerns have raised a question mark about the way cars are made, sold and used in the country.

Due to dangerously high levels of air pollution in Delhi, the state government imposed restriction on vehicular movement by imposing the odd-even rule (where cars bearing odd and even registration numbers could ply only on odd and even days of the month respectively) for a certain period of time. Furthermore, the registration of new diesel vehicles with an engine capacity of 2,000 cc and above have been banned till March 2016.

This directly impacts the sales prospects of domestic and international carmakers like Mahindra and Mahindra (M&M), Mercedes and Toyota, who even moved court against the order, but to no avail.
What would be worrisome for carmakers is that the air quality of most major Indian cities is not much better than Delhi’s, and rightly or wrongly, traffic congestion and vehicular pollution tends to get isolated as a major contributing factor for degradation of the atmosphere. This may encourage other state governments to follow Delhi’s example in curbing the use of passenger vehicles.

This implies that the spotlight may well be on clean and green technologies on display at the Expo. Companies like Toyota and Maruti Suzuki, India’s largest carmaker, have gone on record to say that hybrid variants of existing and upcoming models will be a key part of their future strategy in India; and it will be interesting to see how many such technologies are showcased at the Expo.

Along with the usual gas-guzzling superbikes, electric scooters are also likely to find a meaningful place at the exhibition this year. Noida-based Lohia Auto is likely to showcase India’s first lithium ion-batter operated electric two-wheeler, whereas M&M will be showcasing its smart electric scooter GenZe 2.0, the first of its kind from the Anand Mahindra-led company’s stable.

While green technologies will be in vogue at the motor show, the expo wouldn’t be bereft of its usual dose of big launches and star attractions either.

Auto Expo 2016 is likely going to be an important event for Tata Motors, a part of the $100 billion-Tata Group. The carmaker that has been struggling over the past few years, losing market share to rivals like Maruti Suzuki and Hyundai, is banking on a slew of new launches to turn around its fortunes in the Indian passenger car market.

In response to an email questionnaire, a Tata Motors spokesperson said that Tata Motors would be hosting the largest OEM (original equipment manufacturer) stall at the Expo with a theme that blends smart technology and smart products, called #TataMotorsSmartHub. “We will unfold an exciting line-up of over 20 modern and contemporary passenger and commercial vehicles,” the spokesperson said.

Some of the new cars on display from the Tata Motors stable include Zica, a new hatchback; KITE 5, a new compact sedan and SUVs like the Hexa, Nexon and Safari Storme Tuff.

The Toyota stall is likely to be another star attraction at the exhibition, with the Japanese carmaker slated to showcase the new Innova, one of its best-selling offerings in India, whose teasers have managed to generate significant curiosity so far. Also on display will be the new Fortuner, Toyota’s premium SUV, along with the new Corolla Altis Hybrid.

M&M, known for its SUVs, will display the XUV Aero, a concept coupe. The event will also be significant for SsangYong, the Korean carmaker that M&M acquired in 2011. SsangYong has so far sold only one model in India, the SUV called Rexton. SsangYong will be showcasing the Tivoli at the Expo, a crossover SUV that will soon be launched in India.

Speaking of compact SUVs, this segment of cars has become increasingly popular among Indian car buyers aspiring for the feel of an SUV that has manageable proportion to navigate city roads and is easy on the pocket. After the runaway success of models like the Ford Ecosport, Hyundai Creta and Renault Duster, brands such as Maruti Suzuki and Honda will be announcing their entry into this space at the Expo. Maruti Suzuki will be displaying the much-anticipated VitaraBrezza, while Honda will try and impress visitors with the BR-V.

While Indian carmakers will make their presence felt at the Expo, marquee international brands won’t be left far behind. Two of the biggest crowd-pullers are likely to be the Ford Mustang, the American muscle car, which was launched in India a few days ago; and Jeep, The Fiat Chrysler-owned brand that makes its India debut with global best sellers like the Wrangler and the Grand Cherokee. Mercedes Benz, which is tipped to overtake Audi and regain its leadership status in India’s luxury car market, will continue with its strategy of offering multiple new models in the country and will showcase the S-class cabriolet and the GLC. Jaguar Land Rover will put on display the new XE, F-Pace and the Evoque convertible.

Indian and international bike manufacturers will be keen to show their prowess at the Expo as well. KN Radhakrishnan, president and CEO of TVS Motor Co. told Forbes India that the bike manufacturer will unveil “some exciting concepts”, as well as display the recently launched TVS Apache RTR 200 4V and Victor. Iconic motorcycle brand Triumph will also be showcasing its new Bonneville range of classic, performance bikes at the Expo.

Amidst the excitement of new cars on display, top leaders of the Indian auto sector will also deliberate upon the opportunities and challenges facing the industry. Foremost among these is the adoption of technology – be it to compete with unusual competitors like Google and Apple who seek to make driverless cars, or new-age cab aggregators like Ola and Uber, who are offering a credible alternative to individuals who don’t want to own a car. Then there is also the issue of the industry adapting aligning itself with the government’s decision to move directly from BS-IV emission norms to BS-VI by 2020.

“Implementation of BS-VI in 2020 will be a challenge for the industry irrespective of the engine, vehicle size or tonnage as the driving cycle in India is very different,” the Tata Motors spokesperson said. “Re-engineering the entire portfolio is technically doable but requires a lot of investment and innovation.”

According to industry sources, adapting to BS-VI norms could cost the industry as much as Rs50,000-80,000 crore, and this will make passenger vehicles more expensive. According to a Maruti Suzuki spokesperson, the government’s decision to leapfrog to BS-VI means that the industry “will need to do the same work (in working towards BS-VI) in four years against earlier timeframe of six-seven years.”