The professional network wants to transform into one of the world's largest content databases. With its India base growing exponentially, it is looking to help financial services firms reach out to customers with first-party data 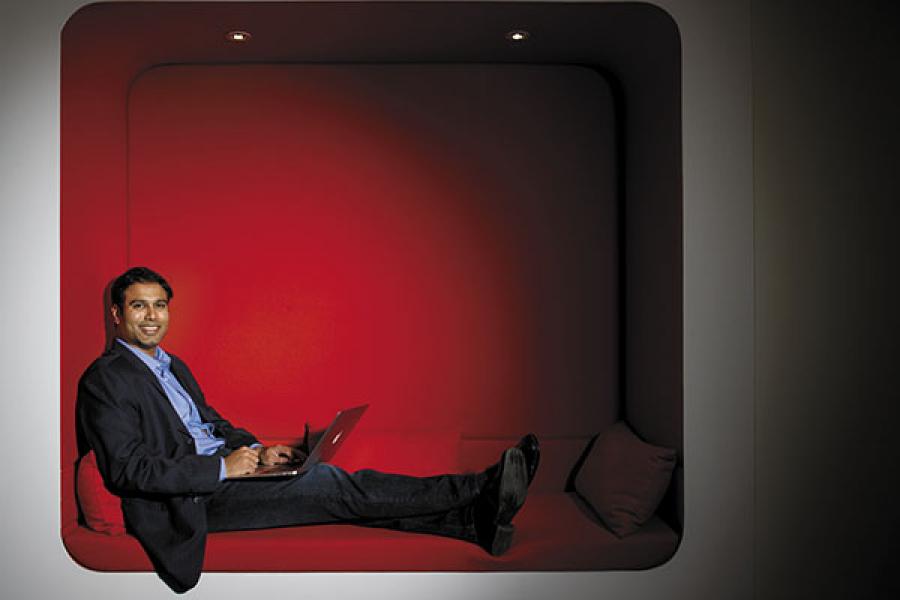 Image: Amit Verma
Nishant Rao, LinkedIn’s India head, says his company refused many chances to tread the social network path and decided to focus on the business side instead

Erik Qualman, internet guru, blogger and the author of Socialnomics, a seminal tome on the impact of social media on our lives, had once said, “We don’t have a choice on whether we do social media. The question is how well we do it.”

LinkedIn has taken this indisputable premise one step further: By stoutly refusing the social network tag altogether. “LinkedIn is a professional network,” insists Nishant Rao, the company’s India head. “We’ve had many chances to go down the social network path, but we’ve decided to focus on the business side instead,” he says, sitting in LinkedIn’s brand new office in suburban Mumbai.

The company’s financial records, furnished to the Securities and Exchange Commission (SEC) in the US, validate Rao’s claim. Of LinkedIn’s $2.2 billion revenue in 2014, $1.3 billion, or 59 percent, came from talent solutions (corporate recruitment and other related services). Its other revenue streams include premium subscriptions and marketing solutions. This is in stark contrast to other online platforms, which earn revenues almost solely from advertising. Consider this: LinkedIn’s revenue share from marketing solutions in 2014, which includes ad revenues, was just $455 million, or less than a third of the total.

In fact, in the second quarter of 2015, talent solutions contributed to an even larger share of revenue for LinkedIn: 62 percent, or $443 million of the total $712 million.

This fundamentally different approach to the business puts LinkedIn in a unique spot among online social/professional networks. In a way, the strategy gives LinkedIn a loyal user base. According to web traffic data provider Alexa, despite LinkedIn having just over a half of Twitter’s daily visitors (65 million and 110 million, respectively), it manages to engage its users for an impressive 7 and a half minutes per day against Twitter’s 7 minutes and 40 seconds.

But LinkedIn is also going all out to expand its user base and recalibrate its goal from being just a premier corporate hiring tool to one of the largest content databases for businesses and entrepreneurs. Perhaps, the most critical step in this direction is the introduction of long posts for its users, mostly professionals and experts.

Will the freedom to post indiscriminately dilute the brand’s value? Rao doesn’t think so. Since the platform is not anonymous, he says users will be posting in their professional capacities helping LinkedIn keep a check on the quality of the content generated. Says Rao, “From a consumer standpoint, our value propositions have shifted. We are looking to become a more content-centric platform.”

Greater content would also translate to bigger advertising revenues. While LinkedIn doesn’t really bank on it, it would be naive to assume that it will turn a blind eye to the $133 billion that was spent on online advertising globally in 2014, according to Mary Meeker’s Internet Trends report.

LinkedIn’s recent acquisitions provide an insight into how the company is gearing up for its contents role. In 2012, it acquired content sharing site SlideShare for $118.75 million, and in 2013 it bought the Pulse newsreader app for $90 million.

Its biggest acquisition till date came this April, when it bought online learning company Lynda.com for $1.5 billion. The shift in focus became evident when CEO Jeff Weiner alluded to this deal in the earnings release, dubbing it “one of LinkedIn’s most transformative initiatives”.

In this regard, LinkedIn is not very different from other social networks. “Today, a social network wants you to spend maximum time on its platform. For that, they have to continuously engage with you. LinkedIn is no different,” says Prasant Naidu, founder of Lighthouse Insights, an Indian social media tracker. “Although it is a professional network, LinkedIn has opened itself up as a publishing platform to increase engagement.” And if it is to boost revenues, this engagement cannot be limited to members.

LinkedIn’s push to attract big brands to its network is reflected in the global events it organises, like Finance Connect, where it attempts to connect with financial services marketers to enable them to understand their customers better. After a global launch three years ago, the company brought the event to Mumbai in 2014 and organised its second India edition in late-May.

“The first reason for bringing this event to India,” says Jennifer Grazel, director, global vertical marketing, marketing solutions at LinkedIn, “was because India is one of our fastest growing markets. The emerging middle class and the rapid creation of wealth mean that India is a key market for LinkedIn.” According to the Mary Meeker Internet Trends report for 2015, India is LinkedIn’s second largest market in terms of members, next only to the US.

The focus on content manifests in LinkedIn’s India strategy too. In an interview with Forbes India in 2014, Rao had claimed that LinkedIn’s India base had broadened outside industries that are typically associated with the early adoption of technology.

Grazel says one of the key things that the company is looking to do is to leverage LinkedIn’s data and technology to help financial firms initiate a conversation with their customers.

LinkedIn may not have Facebook’s 1.48 billion strong monthly user base or Twitter’s relatively smaller but dynamic community of 304 million monthly active micro-bloggers, but it plays to its strengths. Says Olivier Legrand, LinkedIn’s senior director, marketing solutions, Asia Pacific & Japan, “A complex business sales cycle is where we excel. Financial services and tech are such great verticals for us, because we help companies create a relationship with customers using first-party data that no one else has.”

Financial services companies in India haven’t been the first out of the blocks when it comes to digitisation and leveraging social media. But Sagnik Ghosh, who heads marketing at Axis Bank, believes that banking, or rather financial services, will undergo a transformation in the coming decade and social media will play a key role in this transformation. “One of the key advantages that LinkedIn offers as a platform is the razor sharp targeting to find the right audience to communicate to,” says Ghosh.

However, an understanding of the platform is imperative. “A customer on LinkedIn would not be as open to offers as on Facebook or Twitter,” points out Ghosh, whose bank was on LinkedIn’s 2015 list of the 10 most influential Indian brands. “So we make sure that our communication’s tonality on LinkedIn is more attuned to the platform.”

LinkedIn’s India head Rao agrees with this assumption. “Offers from brands may work on any other platform but we encourage marketers to ask themselves how are they adding value to their brand? The underlying thread is moving from quantity to quality,” says Rao.

LinkedIn, for its part, is shifting focus to mobile. “About 49 percent of our members are accessing LinkedIn through mobile phones,” says Grazel. “So if you look at our platform, we’ve been revamping the desktop side to make it seamless with mobile.”

Another Indian financial services firm that has been actively leveraging the professional network is Bajaj Finserv. Manish Jain, its group marketing head, agrees that social media marketing is fast catching up even though its size, currently, is relatively small compared to the traditional channels. He identifies three important challenges that LinkedIn will face while expanding its reach:

The key then, it would seem, is for the platform and the brand to meet each other half-way. “In our case, we are incorporating insights in our pre-approved proposition strategy,” says Jain. “However, it is early days and we are still learning.”

What it boils down to, eventually, is the user experience. “I don’t know if LinkedIn would be the right platform for marketing per se,” says Sidhant Bhutani, co-founder of Krumbb, a food app. Bhutani uses the platform to read corporate case studies and educate himself about business practices.

Both Sagnik Ghosh and Manish Jain insist that leveraging LinkedIn as a hiring platform remains a priority. And that doesn’t seem to be changing anytime soon.

(This story appears in the 04 September, 2015 issue of Forbes India. You can buy our tablet version from Magzter.com. To visit our Archives, click here.)