The treasure of Al Thani

Thanks to the Panama Papers, it has become obvious just how fabulously wealthy Qatar's former prime minister is 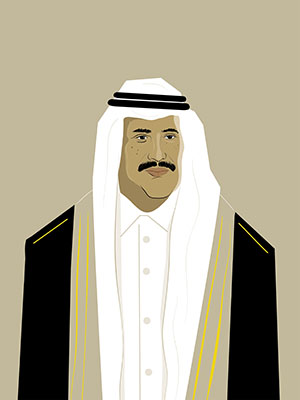 What the world knows about Hamad bin Jassim bin Jaber Al Thani, the imposingly mustachioed member of the Qatari royal family, is mostly confined to his actions as a politician. From 2007 to 2013, he served as prime minister of the country his great-uncle founded 45 years ago. While in power, Al Thani dealt with issues that included border disputes between Saudi Arabia and Bahrain (two of his country’s nearest neighbours) and the human rights crisis in Darfur (where the Qataris had investment interests). Beyond his political profile, Al Thani jealously guards details about his life. Until recently, little more than his age (he’s 56) was verifiable—but then the Panama Papers leak revealed a copy of his passport as well as documents detailing his ownership of several offshore companies that in turn own the yacht Al Mirqab, one of the largest pleasure crafts ever built. It reportedly has a helipad, jacuzzi, movie theatre, gym and spa. Such add-ons make the Al Mirqab worth about $300 million. Beyond that, Forbes uncovered a series of Al Thani’s stock purchases. Typically we don’t include royals in our ranking of billionaires—it’s too hard to differentiate between assets owned by the state and those owned individually—but in this case it’s clear that Al Thani is worth at least $1.3 billion. Constituting most of his fortune: A 3 percent stake in Deutsche Bank worth almost $800 million, plus nearly $220 million of stock in Gulf Warehousing, a Qatar-based logistics company. Neither Al Thani nor his representatives could be reached for comment.

Tweets by @forbesindia
Ola braces for a new race
MNCs will have to disclose more about transfer pricing: KPMG's Sean Foley