How to train your robot

Decades of science fiction movies have trained us to fear robots: They will enslave us. Wipe us out. Take our jobs. In real life, humans and machines are teaching each other how to do more together than they could do alone. Here are six companies where robot training is well under way and the humans are getting valuable tech skills in the bargain 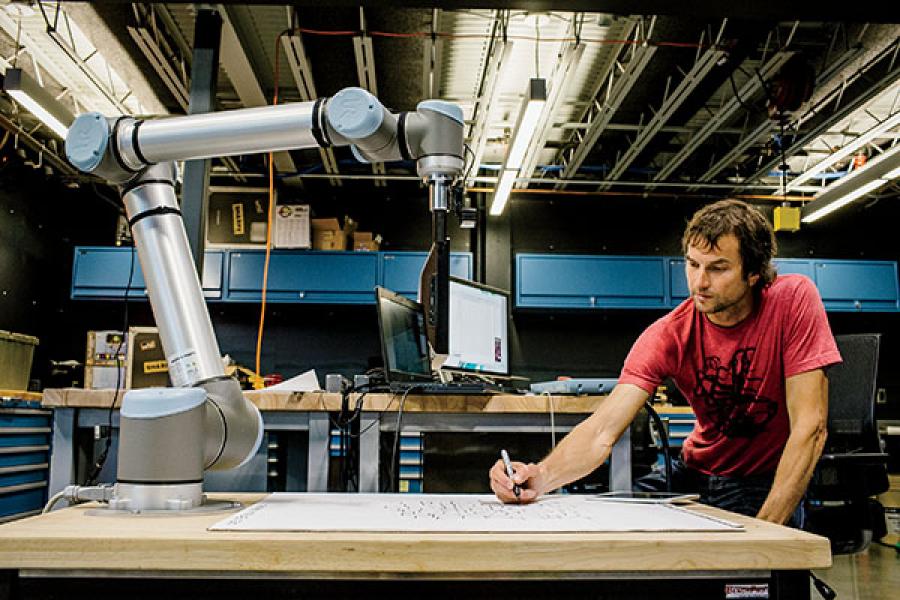 Autodesk
Teaching a Robot to Paint
In the new short film Artoo in Love, the famous Star Wars droid goes head-over-wheels for a similarly dome-shaped US mailbox. The film, written and directed by Autodesk engineer Evan Atherton, called for a scene in which the lovers pose for a sketch artist, also a robot. Not settling for fakery, Atherton asked his Autodesk colleague David Thomasson if he could train a robot to sketch from life. Why not? They tutored the robot first on line drawings, guiding its arm across the canvas, then moved on to curves and flourishes until its algorithms could eventually take over. With the film wrapped, the team is now teaching the robot to paint and eventually will use motion-capture so it can mimic and adapt human actions to make more original works. The hope, says Thomasson, is that robots will be not just “a practical tool but also a creative partner”. 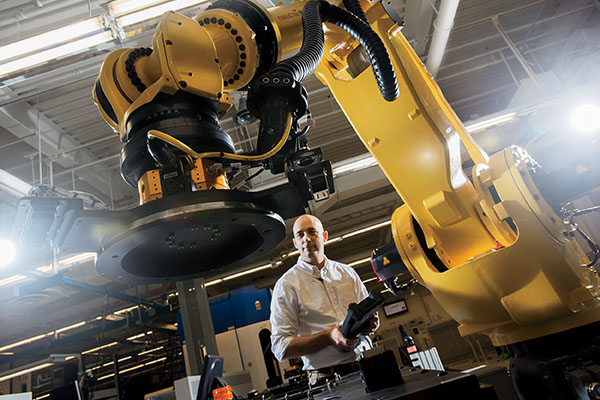 Raytheon
Learning Fast and in unison
Raytheon’s 47,000 square foot factory in Tucson, Arizona, is chock-full of robots and
humans working together. Raytheon doesn’t build its bots: It buys them and installs a common software interface to make them simpler to train and re-task. When a robot needs to learn something, the task is first simulated in Raytheon’s software and then pushed to the robot for initial testing. The whole process can take just a few hours to a day, according to operator Charles Scott. Once a bot is on the floor, the factory line simulation is updated and pushed out to robots already in use. “They’re very common robots, but these guys have made them solution-oriented for our products, which
are very complex,” said Kim Ernzen, vice president of operations. 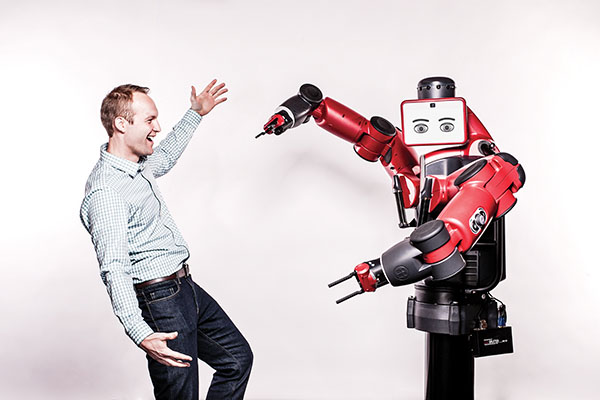 Rethink Robotics
Parlour tricks are productivity
Engineer Nate Koontz is a trainer for Rethink Robotics’s versatile Baxter, and for each new customer (John Deere and Kaiser Permanente among them), he usually starts by studying photos or illustrating the task that a customer would like to automate long before rigging up Baxter to an assembly line. Total training time can take anywhere from a couple of hours to a month on-site, depending on complexity. Rethink often holds hackathons to teach Baxter new tricks, such as bartending or playing Connect Four. Games can unearth ideas for new software features. One such solution came from an employee who’d trained Baxter to make coffee with a Keurig brewer. The process ended up being used by a Baxter doing quality control for a consumer beverage company. That particular Baxter was trained to mix a drink, examine it for sediment and pour it out in a manner similar to the way it was trained to brew coffee. 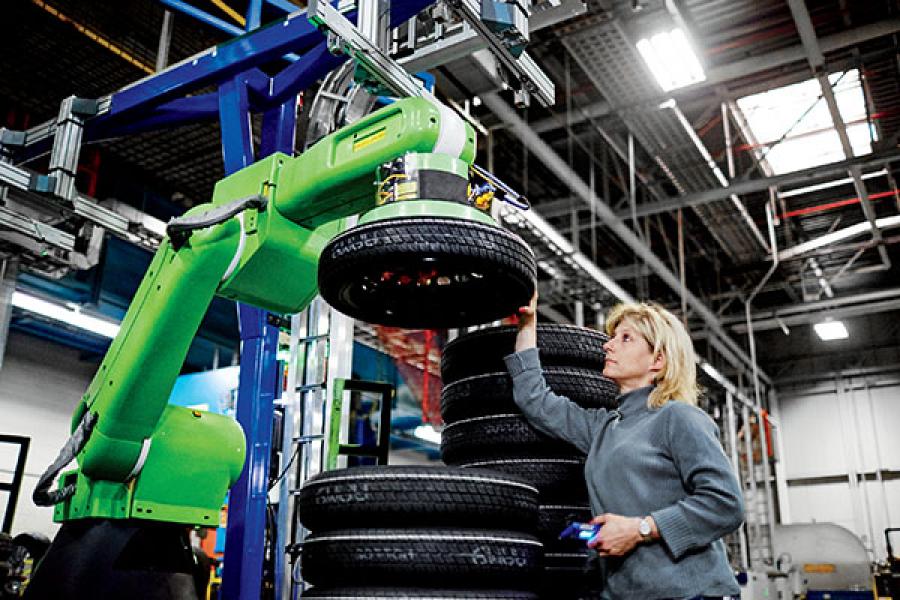 General Motors
Getting closer to the machine
Some unlucky human at GM’s Orion, Michigan, assembly plant has had the dull, back-breaking job of pulling spare tyres of a conveyor and stacking them based on their assigned vehicle. No surprise: The factory’s first collaborative robot, which arrived in January 2015, was ordered to stack tyres. The hard part was teaching it how to manoeuvre in a crowded workspace where people are usually two feet away. “Manufacturing is a contact sport,” says GM engineer Marty Linn. GM turned up the sensitivity on the robot’s force sensors and ran it through many dress rehearsals using real props and people. The humans had to learn to work with the robot, too, going through an “awareness week” of demos and testing. The robot is now considered part of the team. 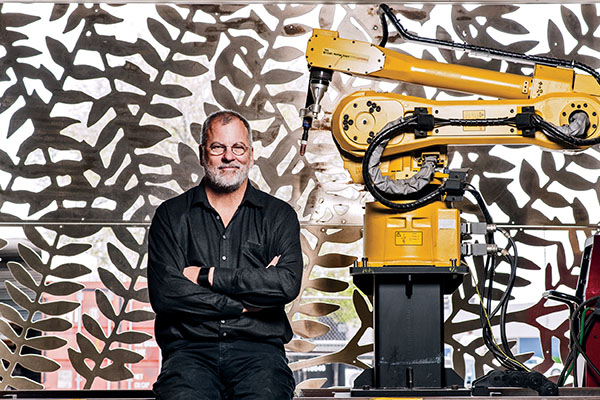 A ZAhner CO
Welding like humans do
Architects worldwide turn to Kansas City’s A Zahner Co for huge, custom metalwork and facades, which adorn buildings such as New York City’s Guggenheim Museum, the Dallas Cowboys’s stadium and the Art Wall at Doha. For years, Zahner’s unionised workforce was reluctant to let robots in until the employees and CEO Bill Zahner realised they would free up skilled craftsmen to do more intricate work on large-scale projects. “If you do certain things faster, it enables the more artistic aspects to expand,” said Zahner. The first robot arrived in 2007 and started learning by watching engineers as they welded points along arcs up to 14 feet long. It would follow those points based on the movements demonstrated by the engineers. The welds are done just as well as a master craftsman can do, Zahner said, maybe even better because the robots don’t get tired as they reach the end of a long day. 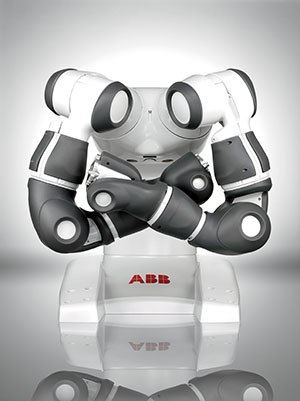 ABB Robotics
Easy as an iphone
ABB Robotics’s newest robot, Yumi, is a two-armed collaborator aimed at companies that have not considered using robots before. Its user interface was inspired by the iPhone, “a sophisticated product, but you don’t have to know a lot,” says ABB engineer Bertil Thorvaldsson. YuMi can be programmed for basic tasks with only a tablet app, but for now, its more sophisticated customers are using its full set of software tools for tasks such as electronics manufacturing. But of all the robots here, the YuMi is likely the easiest one for your family to train once they get a chance.