Moovit has created the Waze of public transit. Is this the app that can beat urban congestion? 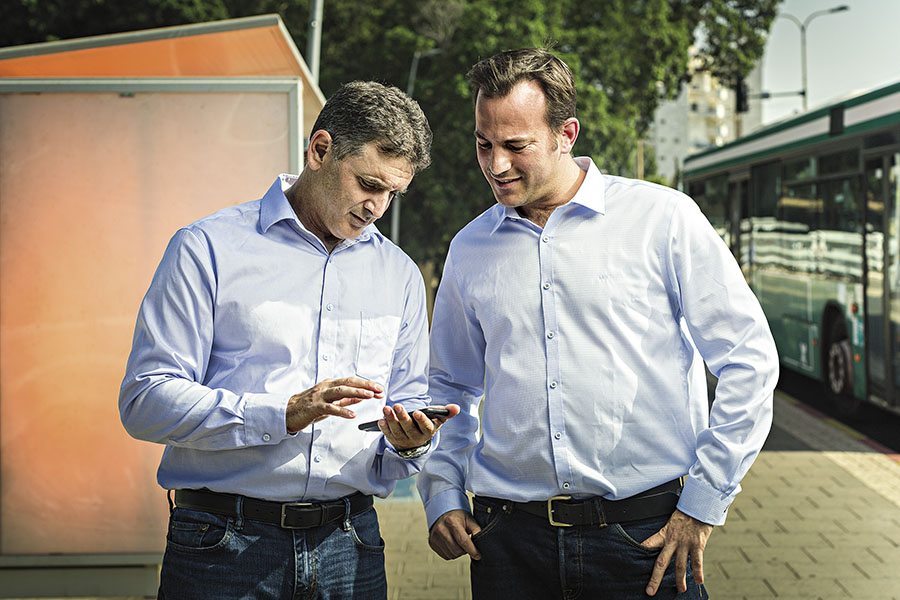 Nir Erez (left) and Roy Bick founded Moovit to help bus and train commuters, encourage residents to ditch their cars and make cities more liveable
Image: Ronen Goldman for Forbes
Like most suburbanites, Janice Mon­kow­ski, a piano teacher who lives in Danville, California, some 30 miles east of San Francisco, gets around mainly by car. For much of her life, public transit was not even an afterthought.

That changed recently when Mon­kow­ski, a self-described technophobe, discovered Moovit. When she goes to San Francisco to meet friends or catch the symphony with her husband, the smartphone app lets her plan bus and train trips down to the minute. “Moovit tells me where to walk and how long it might take to catch a bus to get to the train station,” Monkowski says. “It had probably been 10 or 15 years since I’d ridden a transit bus.”

In exchange for the free service, Mon­kow­ski lets Moovit track her trips. Much like the navigation app Waze, which follows its users on the road to determine optimal driving routes, Moovit aggregates Monkow­ski’s location data with that of other nearby users to predict the most efficient public-transit trip between two locations. “Transit users have an even bigger problem than drivers,” says Nir Erez, a 52-year-old Israeli serial entrepreneur who co-founded Moovit in 2012. Most commuters don’t know when a bus might arrive—let alone how it might connect with another transit service—or when walking or bicycling might be faster, Erez says, speaking from his home in Tel Aviv: “Information is usually bad.”

So bad that Moo­vit has become the world’s most downloaded transit app. In just five years, it has racked up 100 million users—roughly the same number as Waze, which Google bought for $1.1 billion in 2013.

Moovit is available in 44 lan­guages and 78 countries, and commuters in 1,500 cities, from Lexington, Kentucky, to London, Moscow and Hanoi, rely on it to get to and from work. In Los Angeles, 40 percent of its users access it in Spanish. In 2016, Moovit became the official transit app for the Summer Olympics in Rio de Janeiro, beating out Apple and Google, according to the company. When public transit doesn’t get a user all the way to her destination, Moovit may connect her to bike-share programmes or services like Uber.

Moovit’s popularity has helped it attract a string of marquee investors. The company, which launched with $500,000 from Erez, has raised nearly $84 million from the likes of Sequoia Capital, Ashton Kutcher’s Sound Ventures and BMW i Ventures. Its valuation reached $450 million, according to PitchBook. The investors have been lured by the potential to monetise Moovit’s real-time transit information, which includes more than 500 million data points generated daily.

Moovit is the world’s most downloaded transit app; it has 100 million users

Now Moovit must prove it can convert that data into cash. The company says it is just now turning to monetisation and won’t disclose revenue, which remains negligible, according to Forbes estimates. But Erez and his investors say it won’t be hard to ramp up sales, and they believe the company is in the right place at the right time. Cities everywhere are battling congestion and pollution. This has fuelled a frenzy around the concept of “smart cities”, a somewhat amorphous idea that data from all forms of sensors, along with Artificial Intelligence and cloud-connected technologies, will help manage increasingly complex urban systems. Moovit’s plan is to feed cities’ appetite for transit data. “Urban mobility is a global concern,” says Sequoia partner Gili Raa­nan, adding that Moovit’s transit data could “dramatically improve the quality of life of our cities.”

Buenos Aires and Madrid have signed up to be early customers of Moovit’s Smart Transit Suite, a data portal with precise, real-time information on bus and train locations and usage, passenger wait times, optimal routes and more. “They have very granular data as to how people move around cities,” says Andreas Mai, an executive vice president for Keolis, a French transportation-management company that works with transit services around the world. Keolis has invested in Moovit and will incorporate its data in pilot programmes in certain cities that Mai wouldn’t identify.

Moovit began taking shape in 2011, when Erez had just left a startup he’d co-founded and was training for a marathon. He had planned on a leisurely semi-retirement of investing a bit in early-stage startups and competing in triathlons. But on long training runs around Tel Aviv, his friend Yaron Evron kept talking about a website he’d made for the local transit authority with a young computer scientist named Roy Bick.

An avowed transit nerd, Bick had taken it upon himself to help local commuters. Tel Aviv had recently reconfigured its bus system to accommodate a new rail line, changing routes and stops to feed more riders onto trains. Public information about new locations was poor. So Bick walked the city to log stops into a database he had built. He also tapped into transit-bus GPS information to turn his database into a real-time route-planning website.

Bick’s work clearly had the potential to be useful well beyond Tel Aviv. And Erez, who had considered investing in Waze—also founded in Israel—understood that crowdsourced location data flowing from users’ smartphones could provide the basis for creating comprehensive transit-trip planners everywhere. Erez, Bick and Evron founded Moovit the following year, with Erez becoming CEO and Bick overseeing operations. Evron never took a formal role. “I had a nice seven-month retirement, and then it was back to work in another startup,” Erez says.

As Moovit has grown to 100 employees, with headquarters near Tel Aviv and of­fices in cities such as San Francisco, Athens and Rio, Erez and Bick are convinced they can help cities be more efficient in myriad ways. If demand surges on a specific route, for example, Moo­vit could suggest deploying more buses to serve it. “We look at the demand and the actual movement information, then look at the system infrastructure, all the routes and the timetables to understand whether it’s optimised or not,” says Bick, 37. Cities spend millions of dollars to survey residents about their use of public transit, and Moovit can provide better, more up-to-date information at a lower cost, he adds. Best of all: It’s all built one data point at a time by people like Monkowski. “When I go to San Francisco, I don’t want to drive,” she says, noting the city’s “terrible” parking and traffic. Moo­vit has given her another option: “It’s very simple.”

Tweets by @forbesindia
Private Equity Fund raising shows no signs of slowing in 2018
SoftBank: Big cheques and balances in India