How India's wildlife lodges are placing conservation above tourism

Hospitality providers on the fringes of the forests are doing their bit, from eliminating single-use plastic to even blowing the whistle on intruders 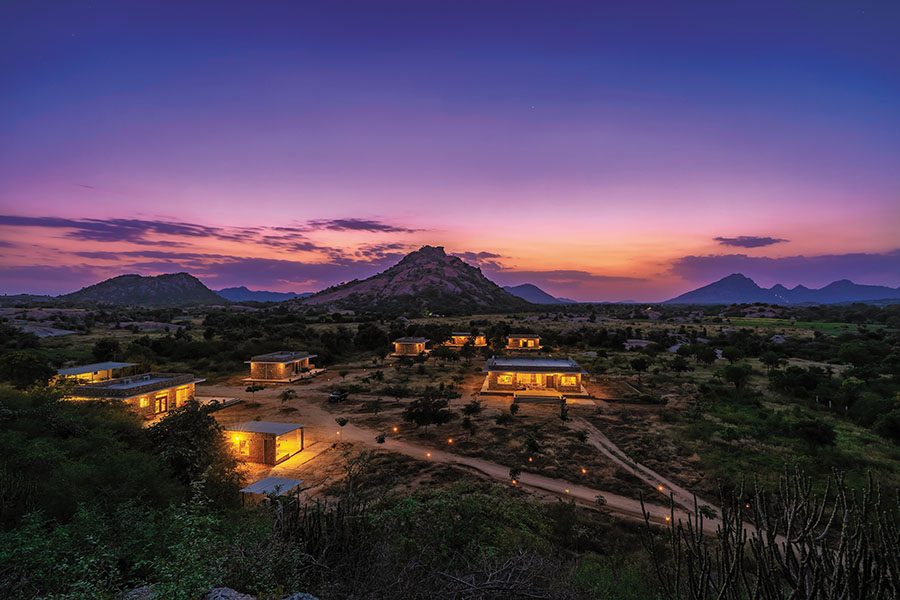 The Bera Safari Lodge in Rajasthan that has come up in place of mining quarries
Image: Umesh Gogna

At the Tadoba Andhari Tiger Reserve near Nagpur, visitors are not happy. Tiger sightings are plentiful, with the occasional leopard and sloth bear thrown in. But in a landmark decision taken last November, the forest department has banned the use of mobile phones inside the forest, a move prompted by selfie attempts with the big cats while on safari. This is just a small step taken by those in the wildlife sector to put the environment and animals before humans. If local governments are slowly waking up to the idea of sustainable tourism, hospitality providers on the fringes of forests are doing their bit for eco-friendliness. These measures range from small steps like eliminating single-use plastic to involving the local community in the daily functioning of the lodge. In some cases, it goes as far as blowing the whistle on intruders, be it poachers in Panna or mining magnates in Jawai. The Jawai story is a prime example of how an individual—who went on to set up a lodge in the same land he fought to preserve for the endangered Indian leopard—can stand up to the powerful forces of commerce and greed. Midway between Jodhpur and Udaipur in Rajasthan, the Aravalli hills of Jawai have been home to the shy and elusive Indian leopard for centuries. However, about a decade ago, the state mining department sanctioned stone quarries in the region, threatening the destruction of their habitat. Shatrunjay Singh Pratap, who had been working with Sula Wines in Nashik, decided to take up the cause of the animals, and lobbied with the state government—with help from local villagers and politicians—to get the mining licences cancelled. What followed was a three-year court battle, after which the government gave in. Instead of the quarries, there now stands the Bera Safari Lodge, set up in 2015 in the small village of Bera in the Jawai region. Jawai is a barren and rocky region, the perfect foil for leopards who are known to be shy and elusive predators. Besides, there is plenty of other fauna including chinkara, sloth bear and jackal. With just five squat suites and a common dining area, the Lodge seems almost part of the surrounding landscape. Safaris are designed to watch wildlife in their natural habitat, rather than being intrusive in nature. 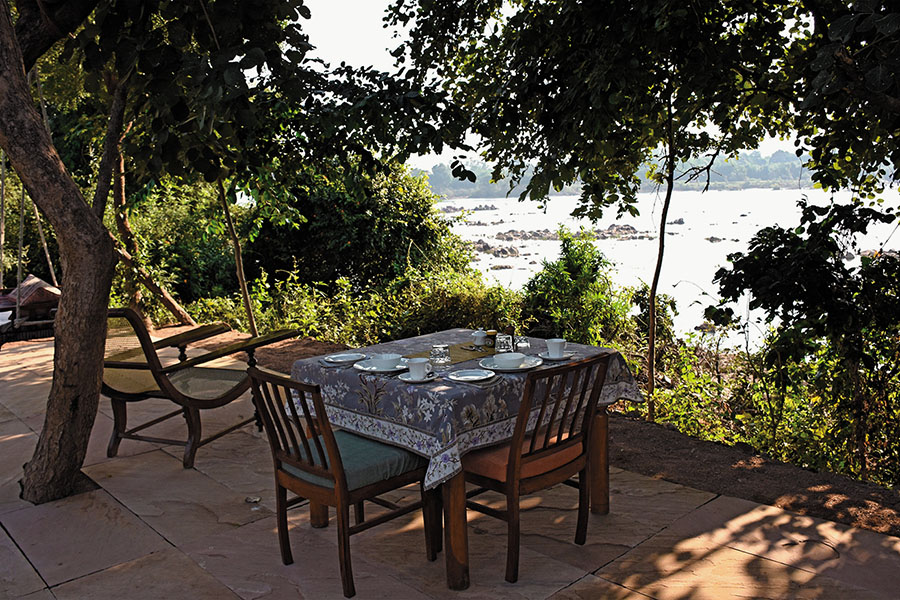 Pratap talks about the region with a passion that comes from a deep commitment to the ecosystem. “Our motto of conservation and community provides nature enthusiasts an opportunity to watch leopards in their natural habitats, and simultaneously ensures that the wildlife continues to thrive, and that local communities do not have to suffer economic losses due to having these animals in their midst,” he says. Panna National Park in Madhya Pradesh has a somewhat similar story, although the conservation efforts were much slower to start and tougher to realise. This reserve went from a healthy count of over 20 tigers in 1994, when it was first brought under the purview of Project Tiger, to a startling zero just 15 years later, when all the big cats had fallen to poachers. Joanna van Gruisen runs the Sarai at Toria resort with her researcher-conservationist husband Raghu Chundawat, who was studying the ecology of tigers in dry forest areas in 1995. They were living inside the tiger reserve at the time poaching went on uninterrupted. His film for the BBC Natural History, Tigers of the Emerald Forest, in 2003 and other research findings indicated that collared tigers had begun to disappear from Panna, but the forest department did not take these warnings seriously. Van Gruisen says, “The project came to an end as we were the whistleblowers for poaching. And the forest department, right up to the moment when all the tigers were killed, preferred to insist all was fine. They did not want a research project saying otherwise, so they rescinded our permission and we were thrown out of the park.” Van Gruisen adds that their relationship with the forest department remained sour and the couple was not involved in the reintroduction of tigers into the reserve in late-2009. And although they choose not to label themselves as a wildlife lodge, since the temples of Khajuraho are a greater attraction for most guests, their commitment to the surroundings remains unchanged. “Tourism is one of the few benign industries that can co-exist sustainably with these wilderness areas,” says van Gruisen. The Sarai at Toria, started in 2010, have been built to blend into the environment as much as possible: It uses a minimal amount of cement and steel, and opts for the locally available mud for “breathable” walls; its furniture is made from ethically sourced village timber. Van Gruisen elaborates, “An important aspect of the Sarai is that environment concerns have been uppermost since its inception. So, from the design stage, sustainability and eco-friendliness were part of the perspective. And we run it that way, employing local staff, using low-energy appliances and bulbs, minimising the use of plastic, growing organic herbs and vegetables and buying local.”  Pugdundee Safaris is another brand of boutique lodges, set up in 2009, along the forests of Madhya Pradesh (including Panna), with similar commitments to sustainability. Every bit of plastic has been replaced with metal and the lodges, especially the treehouse properties, have been built to minimise their impact on the environment. Owner Manav Khanduja explains their understanding of an ecolodge with 5 Cs: Construction, conservation, customer, community and commitment. “It starts with finding the proper land and responsible construction processes, to ensuring that guests go back as ambassadors for conservation,” he says. Pugdundee’s policy also extends to rewilding the land used to build these lodges, by planting local species of trees and grass, creating “mini forests” that keep the property green. Down south, Red Earth at Kabini, Karnataka, prides itself on a similar approach to the environment, beginning with its construction principles. Rachel Ravi, co-owner, says, “The name Red Earth itself has come from the colour of our soil, the same soil that is used in the construction of the resort by compressing and baking it under the sun.” The cottage roofs are layered inside with bamboo mats—made by the tribal women of Wayanad—while the outer layers are made of elephant grass mats, woven by expert craftsmen from Tamil Nadu. Another significant way in which wildlife lodges are adhering to the principles of sustainability is by working with, and giving back to, the community among which they are based. Hashim Tyabji, veteran naturalist and conservation expert, has been involved in several such properties, including the unique Snow Leopard Lodge in Ulley, Ladakh. It began life as a homestay owned by one of Ladakh’s top snow leopard trackers—Tchewang Norbu—under a programme initiated by the Snow Leopard Conservancy. The programme was designed to utilise tourism as a tool for the conservation of snow leopards, by letting tourism revenue flow directly into the local community. Tyabji, along with environmentalist and hotelier Rahul Sharma, has leased the homestay from Norbu, and using their experience and expertise, “converted it into a comfortable lodge with dedicated spotters, trackers and naturalists”. The revenue generated by a full-service lodge, as compared to a basic homestay, has allowed them to reduce pressure on resources by channelling the money into practices such as better waste disposal and optimal energy use, as well as donations to the Snow Leopard Conservancy and Village Development Fund. 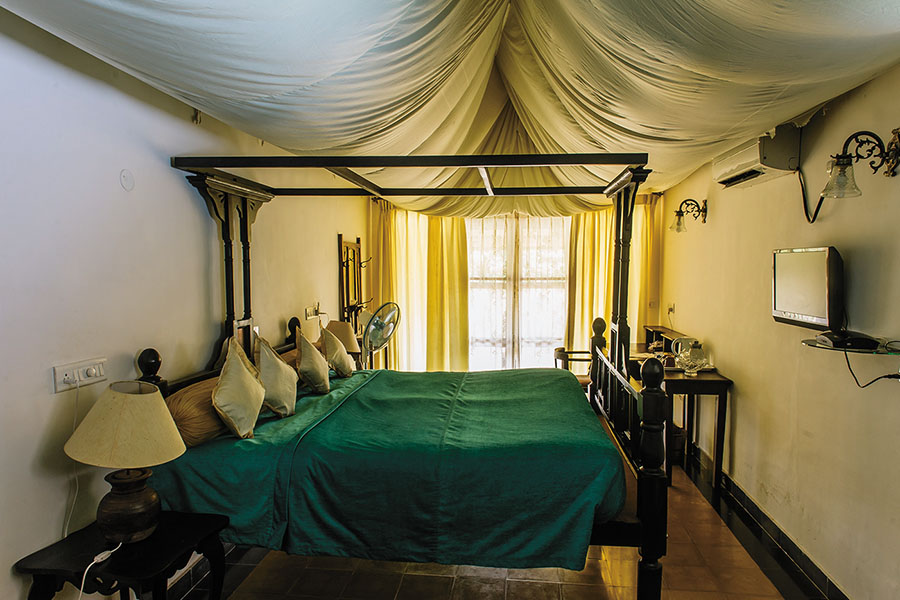 Red Earth at Kabini, in Karnataka, has adopted five villages in Wayanad, close to the resort
Image: Red Earth

Tyabji and Pratap both talk about the losses to livestock from predators that affects the villagers, and the need to offset those losses in order to keep the community sympathetic to the cause of wildlife conservation. According to Tyabji, “Controlled and responsible tourism such as we aim to practise at the Snow Leopard Lodge has achieved that, without the ill-effects of mass tourism, which is a burden on fragile ecosystems. Also, the donations that come to the Snow Leopard Conservancy from our guests allow the villagers to build structures that protect their animals.” Rachel Ravi says Red Earth has adopted five villages around the resort, providing steady support to the two government schools there, in the form of books, stationery and teacher salaries. The team also holds training and awareness camps among villagers, since “sensitising people on the different species of fauna, their breeding patterns and their migratory routes, evokes interest that prompts them to help in the conservation process”. This also creates skilled jobs for villagers who have been displaced from their natural forest environment when land was cleared to for the sake of controlled tourism. They are employed as naturalists and forest guards, keeping them away from social problems ranging from alcoholism to suicide, created by the sudden disconnect from their land.

Describing their efforts in Panna, van Gruisen says, “We have a Nature Education project in nine remote villages in the surrounding areas of the national park. We see this as an objective in itself, but also as a stepping stone into the community with a hope that ultimately it can lead to further conservation and livelihood benefit for them. It has already brought in involvement from an urban school whose children came to help build toilets for one school, paint colourful wildlife and educational images on the walls, and help run an eye camp that brought spectacles to 300 of the villagers.” Ultimately, properties in the wildlife tourism sector have begun to realise that responsible practices are not just about caring for the environment alone, but also creating a positive brand image for themselves. This is a sentiment echoed by all these lodge owners: That carefully controlled wildlife tourism could be used to spread the message of conservation and, in turn, generate higher interest and eventually revenues for the businesses. However, van Gruisen has a word of caution. “Responsible wildlife tourism is not necessarily, or just about having projects or not using plastic bottles; it is more about trying to move away from showcasing the tiger and other wildlife as if they were the Taj Mahal, and about understanding the totality of the natural world and how it is impacted by us.”