The global beauty market, which last year generated nearly $500 billion in sales, is teeming with celebrities, inundating social media feeds with lip gloss, face lotion and, most recently, vibrators, with the promise of plump lips, glowing skin and a better sex life 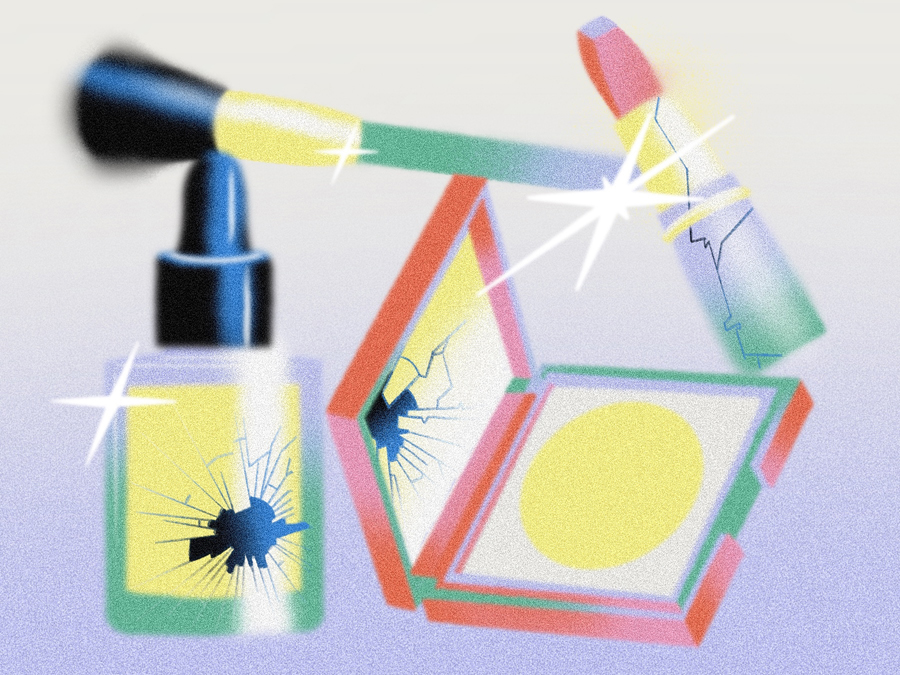 A-list singers, actors and influencers are dropping makeup and skin care lines at breakneck speed — Ariana Grande, Billie Eilish, Chiara Ferragni and Addison Rae are among the latest — but does anyone want them anymore? (Marine Buffard/The New York Times)

Anya Dua, the 17-year-old founder of Gen Z Identity Lab, an online platform for Gen Zers to express their views on politics, mental health, climate change and culture, remembers the first (and last) time she bought makeup from a celebrity beauty brand.

She was 12 and used her mom’s credit card to order a $29 Kylie Lip Kit in Candy K, a matte pink liquid lipstick and matching lip liner. Kylie Jenner’s debut makeup product sold out in seconds when it went on sale in 2015 (the website crashed, too), catapulting the youngest Kardashian-Jenner sibling to beauty mogul status at age 18.

“It was a huge thing,” Dua said. “You needed to have one.” Lip Kits became so popular that they hit the New York City bar and bat mitzvah circuit. Emcees would toss the liquid lip colors and liners into a sea of dancing tweens in bandage dresses.

The global beauty market, which last year generated nearly $500 billion in sales, according to Euromonitor, a research firm, is teeming with celebrities, inundating social media feeds with lip gloss, face lotion and, most recently, vibrators (not technically beauty but beauty adjacent), with the promise of plump lips, glowing skin and a better sex life.

Hailey Bieber has just confirmed that her Rhode Beauty will go on sale next year. (Rhode is her middle name.)

It’s starting to feel like satire. When the Alex Rodriguez concealer for men (a creation with Hims & Hers) landed in May and populated celebrity news accounts like The Shade Room, commenters thought it was a joke.

“When I see a celebrity beauty brand, I just don’t buy it,” Dua said.

According to Hana Ben-Shabat, founder of Gen Z Planet, a research firm, many of Dua’s peers share the sentiment. Ben-Shabat’s data indicate that 19% of Gen Zers said celebrities influence their purchasing decisions, compared with 66% who cited their friends as the most influential.

“Celebrities are saying, ‘This is my skin care, this is what I use,’ and ‘No, I don’t get Botox, it’s just my products,’ ” said Stacey Berke, 34, an addiction counselor from Rochester, New York. “It makes it hard to believe.”

The traditional celebrity endorsement is no longer enough. People need to know there’s expertise or, at the very least, an interest in what’s being sold to them.

“It’s more apparent how transactional it is,” said Lucie Greene, a trend forecaster and founder of the Light Years consultancy. “It’s not something you’ve genuinely done because you’re passionate about lip gloss.”

Once, the only way to gain access to celebrities’ private world was through a spritz of their perfume, said Rachel ten Brink, a general partner of Red Bike Capital and a founder of Scentbird, a fragrance subscription service. Now fans are privy to the food, fashions, opinions and breakdowns, often in real time, of the famous people they follow.

Social media redefined how the public connects with celebrities.

After the fragrance heyday of the early aughts, when seemingly everyone — Britney Spears, Justin Bieber, 50 Cent — came out with a personal scent, Kylie Cosmetics ushered in a new kind of celebrity brand: one that sold makeup (or skin care) online.

Jenner created a blueprint for how to market and sell a brand, which until that point was usually at a department store counter or at Sephora. An Instagram post was all Jenner needed to sell millions of dollars worth of lipstick.

Then, in 2017, came Rihanna’s Fenty Beauty, which fundamentally changed how the beauty industry approached inclusivity, shade ranges and conversations about race. In its first full year, the label generated more than half a billion dollars in revenue, according to LVMH, the French luxury group and co-owner of Fenty Beauty.

There is also Goop, which over the past decade solidified itself as a so-called lifestyle brand. Its founder, Gwyneth Paltrow, sells skin care, supplements and bath salts alongside athleisure.

Everyone rushed to copy these models. Still, some industry insiders are lukewarm on famous founders, including John Demsey, executive group president of the Estée Lauder Cos., owner of Estée Lauder, MAC Cosmetics and Clinique. He has worked with hundreds of celebrities, but there won’t be a brand entirely based on one, he said.

On Dec. 1, MAC, the O.G. of A-list collaborations (Mary J. Blige, Rihanna, Lady Gaga and Mariah Carey have all worked with the brand), released its new Viva Glam lipstick without a celebrity for the first time in 27 years.

“It just seemed right now,” Demsey said of the red, blue and yellow lipsticks that come in tubes printed with Keith Haring designs. “We went back to the essential core essence of ‘What’s the product?’ and ‘What’s the brand?’”

A collaboration captures a moment in time; a brand is forever.

Tweets by @forbesindia
Green-Energy race draws an American underdog to Bolivia's lithium
Storyboard18 - CMO to CEO: Why new-age companies are betting big on marketers to lead them