Can India Pull Off The Commonwealth Games?

Is the Commonwealth Games headed for success? 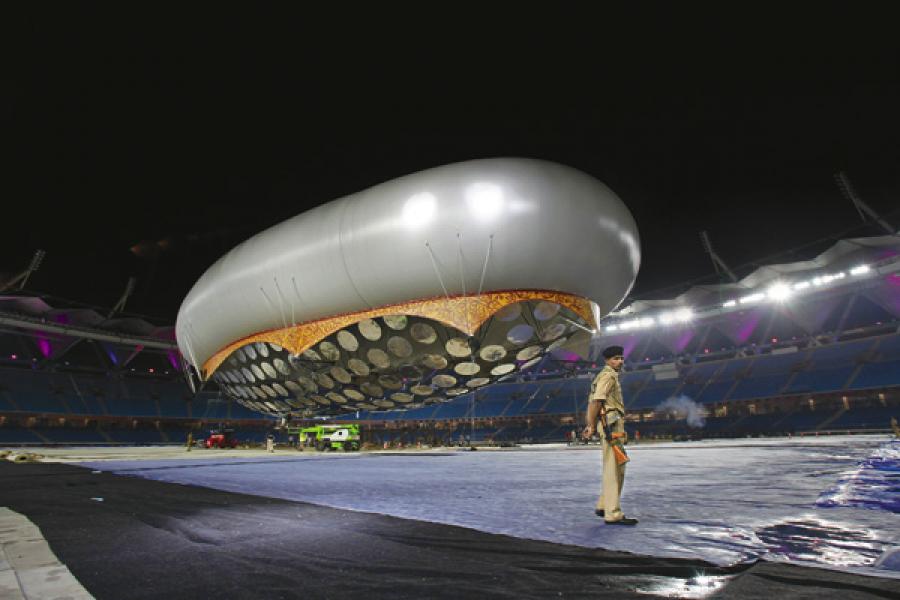 Money Talks
The folks at Commonwealth Games Committee were targeting sponsorship of Rs. 1,200 crore. Till now they have sold sponsorships worth Rs. 342 crore. The huge negative publicity campaign seems to have done some damage. Many large corporate houses have not signed on as yet. As we go to press it appears that most of the sponsors were large public sector undertakings like NTPC, Air India and Central Bank of India. On the broadcast right front, the situation is only a little better. The official target was to get Rs. 211 crore. What they have is Rs. 156 crore.

Will They Come and Watch?
One key area of audience participation will be people who buy tickets to see the events live. On this front too the results have been fairly downbeat. A total 1.7 million tickets are on sale; till now about 200,000 have been sold. Only about one-tenth of the revenue target from ticket sales has been achieved. The good news is that our eternal hope — hockey — continues to be the big crowd puller and more than 60,000 tickets have been sold. Games authorities believe that once foreign tourists start arriving the sales should increase.

Drop Outs
A huge disappointment for the Games has been the large list of drop-outs. Topping the list is the fastest man on the planet: Usain Bolt of Jamaica. If he had turned up the athletics section would have become the most watched event. Olympic track cyclist Victoria Pendleton is another big name gone. She was a gold medal winner at the Beijing Olympics. The 800 metres record holder David Rudisha and world heptathlon champion Jessica Enis too have decided to give the Games a miss. Samantha Stosur, Australian tennis player, who had a great French Open and turned in a very good performance at the US Open, has also decided to not come to India. The Australians continue to be unkind to India because the winner of four gold medals, Stephanie Rice, has opted out. Hers is an injury-related case but even so the commonwealth Games lose their sheen a bit.

Tourist Arrivals
Hotel occupancy right now in the Delhi market is around 40 to 70 percent. It is expected to be between 50 and 80 percent during the Games. Hoteliers who spoke to Forbes India were anticipating occupancies running close to 100 percent. The tariff too is expected to be 5 to 10 percent more than the present rates during the Games. No patch on the doubling of rate that was expected. Of course, hotels are not built just for the Games.

But the Games can be an important fillip for the hospitality industry. “Other than the tame response in hotel bookings, what has hurt most is that the whole business community is moving away from the city. For the whole period of the Games, there are no conferences, seminars and no tourists are coming in. And weddings are also not happening,” says Manav Thadani, MD, HVS India, a hospitality consulting firm. According to HVS, in the last two years, around 6,000 new rooms have been added in Delhi and NCR. This includes around 4,500 rooms in the last one year. But this is nothing compared to the original projections of a few years ago that was more than 20,000 rooms. Now everyone is talking about too much competition and too low occupancies.

Sports Infrastructure
The good news is that almost all venues, at least the interiors, are ready now. Of course, work outside many games venues, such as clearing rubble, beautification, landscaping etc. is still pending. The Games Organising Committee is spending Rs. 20 crore on covering the dilapidated buildings, bridges, subways, underpasses, slum clusters, etc. The work has been contracted to four private firms that have been assigned different areas to work on. These wall wraps will also create a buzz for the Games and have been put up in Connaught Place (CP) to hide the incomplete subways.

The bad news is that many major works going on around the city are unlikely to be completed. For instance, a flyover over the Delhi-Noida-Delhi expressway on the Noida link road that leads to the Games Village from the east is unlikely to be completed. Only three subways at CP will be completed. The rest were half dug but are now being filled up again. At CP, merchant establishments have been working without credit card machines because of disruptions due to digging. The entire parking lot at Shanker Market and the shops’ interiors will not be completed in time, Palika Bazaar will not be getting the elevators installed as was the initial plan.

Delhiites Upset
Unlike during the Asian Games of 1982, the people of Delhi appear to see it as a disruption of their normal life. The Asian Games mascot Appu was an immensely popular figure across the country but Shera has hardly created a buzz. Appu was ubiquitous with tremendous merchandising support. Shera is hardly visible.

During the games, Delhiites are likely to face quite a bit of difficulty around the Games venues and approaches. In several places, one lane, sometimes half of an entire carriageway, has been exclusively designated for CWG traffic.

Mosquito threat to the Games Village is very real because it is on the Yamuna’s bank and is surrounded by fields and marshes that are currently flooded. Japanese encephalitis, viral fever and dengue are widespread in the city.

Tweets by @forbesindia
Mukesh Kumar: "We Don't Want a Repeat of Niyamgiri"
Why Rajinikanth Rocks