How much will remote work continue after the pandemic? 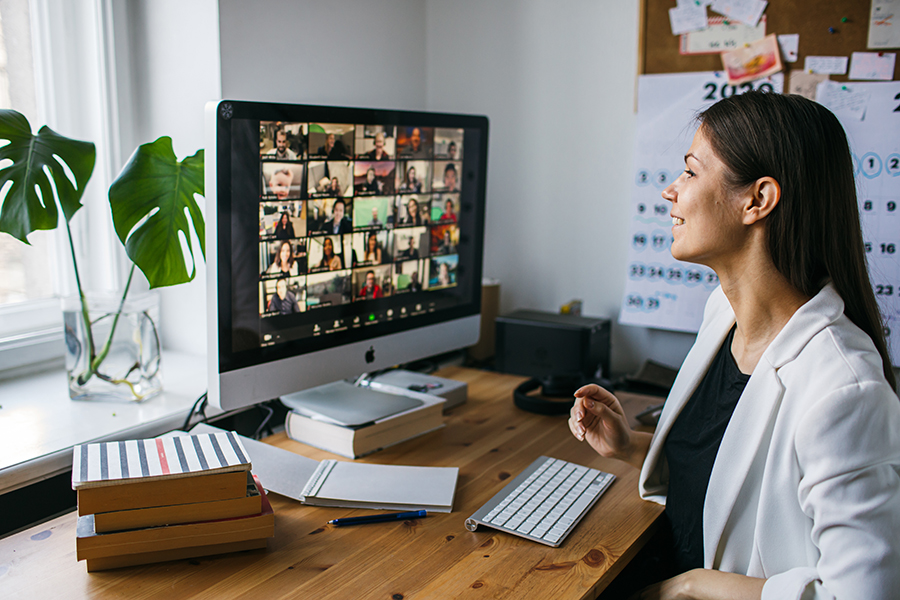 A new study of pandemic-induced remote workers and their employers suggests that at least 16 percent will remain at-home workers long after the COVID-19 crisis has receded.

The survey of 1,800 people in both small and larger businesses also found:

“These estimates suggest that at least 16 percent of American workers will switch from professional offices to working at home at least two days per week as a result of COVID- 19,” the researchers conclude. “This would represent a dramatic and persistent shift in workplace norms around remote work, and has implications for companies, employees, and policymakers alike.”

The working paper, What Jobs Are Being Done at Home During the COVID-19 Crisis? Evidence from Firm-Level Surveys, was conducted by Harvard Business School Assistant Professor Zoe Cullen and Associate Professors Michael Luca and Christopher Stanton, with colleagues Alexander Bartik, an economics professor at the University of Illinois, and Edward Glaeser, a Harvard University economics professor.

They surveyed 1,770 members of Alignable, an online platform for small-business leaders. To supplement that small-business data, a second survey was completed by 70 business economists belonging to the National Association for Business Economics (NABE). Alignable respondents were generally owners or managers of small businesses, whereas NABE respondents generally work at larger firms and were not owners.

The surveys gathered respondents’ impressions about the scope of the switch to remote work during the pandemic, the ease with which different jobs could be performed online, the productivity effects of remote work, and the potential for continued remote work after the threat of COVID-19 transmission subsides.

“The pandemic has brought about tremendous changes, and we couldn’t have anticipated the scale or speed at which they have occurred,” says Stanton, the Marvin Bower Associate Professor of Business Administration at HBS. “I think there’s an important question about the extent to which this is going to be a more permanent change or not, so for me, that’s the main motivation for the paper, as well as trying to explore whether people are more or less productive given this new environment.”

The results confirmed high levels of COVID-related remote work, which the researchers define as working from home at least two days per week. Of those surveyed, 45 percent of Alignable members reported that workers within their companies had seen their jobs move online. In the NABE survey, about 80 percent of respondents said their companies had adopted some form of remote work post-crisis.

The research also confirmed that higher-paying jobs that require more education have a higher capacity to become remote jobs, highlighting concerns about inequality. “The NABE firms seem to have more remote-working, likely due to the fact that more of these firms are in white collar industries where remote working is easier,” the researchers wrote.

Are remote workers less productive?
While past research suggests that many American workers could successfully perform their jobs from outside the office, companies have been slow to adopt remote work arrangements for a variety of reasons, says Luca, the Lee J. Styslinger III Associate Professor at HBS. 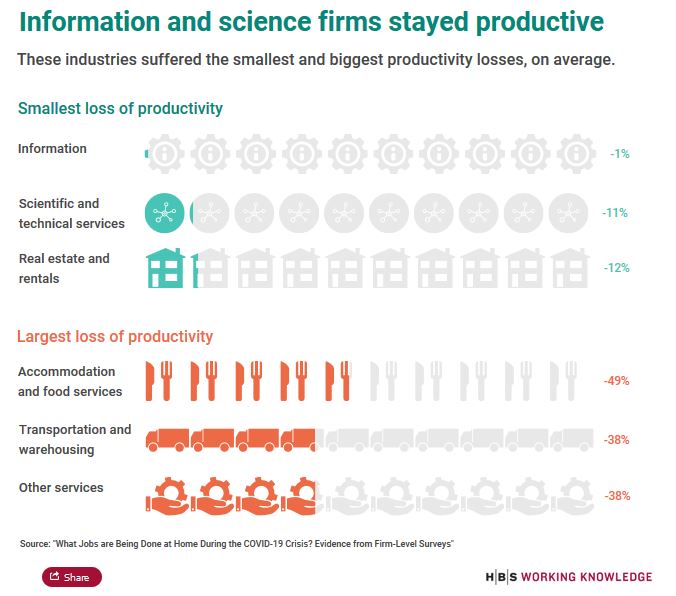 “There can be important barriers to switching to remote work, even if an employer allows it,” says Luca. Some employees worry that working from home means being passed over for promotions. Other workers might prefer an office environment where they feel more productive (even though some of their colleagues might feel more productive at home), or they find it easier to connect with people at the office. “These challenges can be overcome, but managers need to create an environment that will allow remote work to be successful,” Luca says.

In the study of small-business employees by Luca and his colleagues, 29 percent of Alignable members reported that moving to remote work increased their productivity. Among NABE members, that figure was a consistent 28 percent.

Contrary to expectations, workers whose jobs were more conducive to remote work on average did not report comparatively higher gains in productivity as a result of the transition to working outside the office, says Luca. Those findings, the researchers believe, reflect conditions surrounding the pandemic that have made childcare unavailable for many professionals and have added other stressors.

The view across industries
To better understand variations across industries, the researchers compared the survey results with a remote-work feasibility index developed earlier this year by fellow researchers Johnathan Dingel and Brent Neiman of the University of Chicago. They found that the index is strikingly reliable when it comes to predicting the scale of the transition to remote work within a given industry as well as in predicting the productivity gains or losses the survey respondents reported. 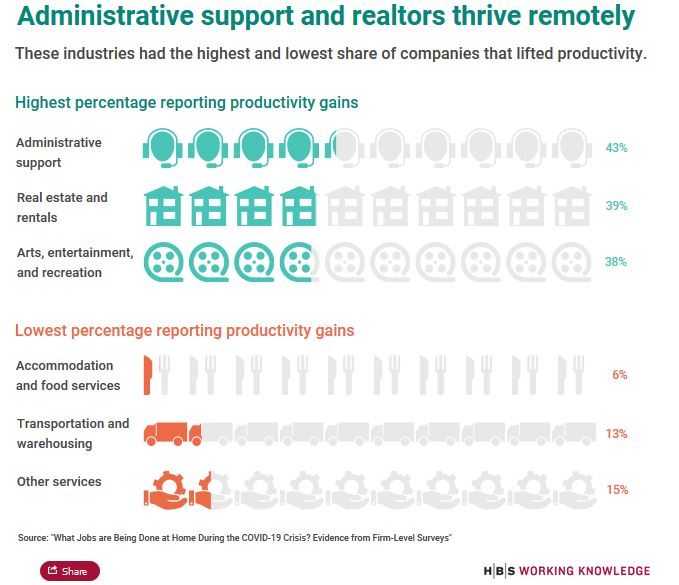 For example, the finance and insurance industry, which the index predicted would have a high capacity for remote work, saw 79 percent of jobs move online, according to the survey results. However, while about 32 percent of survey respondents in that industry reported productivity gains, the industry as a whole reported an average productivity loss of 13 percent. 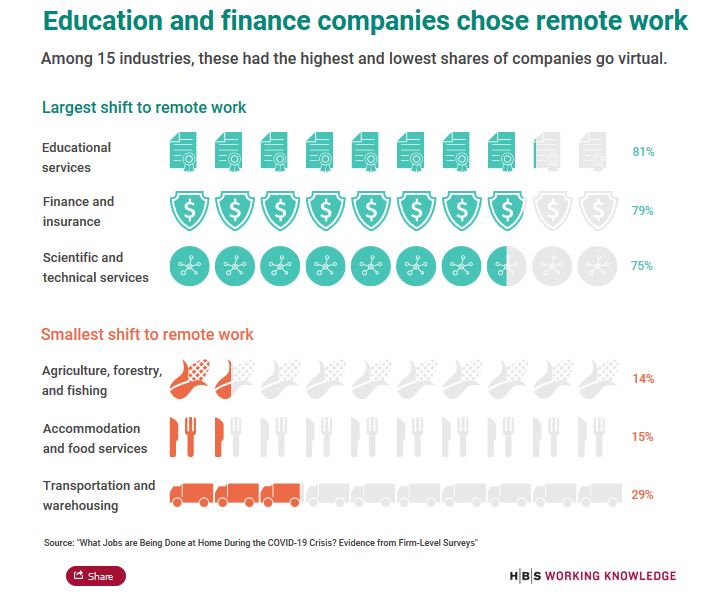 More than one-third of respondents to both the Alignable and NABE surveys said they believed that at least 40 percent of newly remote employees would continue to work remotely at least some of the time, even after social distancing restrictions end. That means, however, that nearly 60 percent of respondents believed that the majority of their workforce would return nearly exclusively to the office, indicating the potential for a more temporary condition.

Although highly impressionistic, the survey data illuminates the scale at which workers quickly began working from home, causing a potential shift in the nature of work that may very well outlast the pandemic.

“Despite the majority of employees returning to the office, the scale of remote work during the pandemic has the potential to lead to a persistent change in the organization of jobs for many firms and workers,” says Cullen, adding “in a way that wouldn’t have seemed possible last year.”
About the Author

Tweets by @forbesindia
'I'm comfortable at the height destiny has put me': Pranab Mukherjee's best quotes
Covid-19: The 5 riskiest states to be a health worker in