What Makes A Good Leader?

Some great managers struggle with change and fail to be great leaders, while a great leader might fail to create a sense of stability in an organization and not measure up as a manager

By Deborah Blagg and Susan Young

When discussing business leadership, the distinction between good management and good leadership is often made. Managers are thought to be the budgeters, the organizers, the controllers — the ants, as one observer puts it — while leaders are the charismatic, big-picture visionaries, the ones who change the whole ant farm. But such a construction, those interviewed for this article agree, erroneously leads to a bimodal way of looking at something that should really be evaluated on two separate scales. "Everybody has got a little bit of each in them," says John Kotter, who admits he is sometimes guilty of using the dichotomy in an effort at simplification. "It's much better to think in terms of measuring people on a zero-to-ten scale for each quality."

HBS professor Joe Badaracco agrees that the traditional manager versus leader argument ("Clark Kent versus Superman," he jokes) tends to undermine the value of management. "There are lots of people who look and act like managers, who have excellent managerial skills, and who don't make a lot of noise. Nobody is writing cover stories about them. But after they have been in an organization for a period of time, things are significantly better," observes Badaracco. "Now, are these mere managers because we can't compare them with Martin Luther King? Or are they leaders because they accomplished something that needed to be done?" 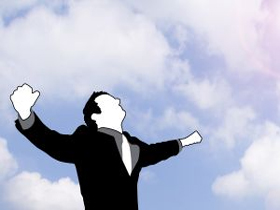 Some great managers struggle with change and fail to be great leaders, while a great leader might fail to create a sense of stability in an organization and not measure up as a manager. HBS professor David Thomas points out that "increasingly, the people who are the most effective are those who essentially are both managers and leaders."

Communication Is Key
"Communication is the real work of leadership," says HBS professor Nitin Nohria, who documented the importance of persuasion in his 1992 book Beyond the Hype: Rediscovering the Essence of Management. Nohria believes effective leaders are masters of the classical elements of rhetoric, as outlined by Aristotle centuries ago. "You can reach people through logos or logic, by appealing to their sense of what is rational," he explains. "You can use pathos, appealing to their emotions, or you can make an argument based on their sense of values or ethos." Great leaders, he notes, "spend the bulk of their time communicating, and they know how to employ all three of Aristotle's rhetorical elements."

Nohria also feels that leaders are able to distill their message, however complex it may be, to something that is accessible to those who may not share their knowledge or background. Joe Badaracco agrees. "You need a talent for simplicity — for saying things in a few words. General Electric's Jack Welch is a good example. He is astonishingly articulate and able to convey complicated concepts in just a few phrases."

Of course, knowing your audience is also essential. "Great communicators have an appreciation for positioning," states John Kotter. "They understand the people they're trying to reach and what they can and can't hear. They send their message in through an open door rather than trying to push it through a wall." Badaracco believes part of knowing your audience is the ability to listen. "Communication can't always follow the top-down model," he says. "With the fluidity of information in business today, leaders need to be masterful listeners; they need to be able to receive as well as send."

David Thomas stresses the importance of "multimodality" in communication. "What you say is only the beginning," he states. "Your behavior, your actions, and your decisions are also ways of communicating, and leaders have to learn how to create a consistent message through all of these. It's been said many times, but leaders lead by example."

For Rosabeth Moss Kanter, a key question is whether a leader's personal passion matches his or her aspirations. "There are so many false starts, unexpected obstacles, and surprising turns along the path to change. Daily work often drains energy needed for change," she says. "Leaders must pick causes they won't abandon easily, remain committed despite setbacks, and communicate their big ideas over and over again in every encounter."

Telling the Hard Truths
What happens when leaders must communicate facts that are hard to take? Nitin Nohria reflects on Winston Churchill's devastating defeat at Gallipoli, which resulted in over 100,000 Allied casualties during World War I. "The campaign was a total fiasco for British military leadership," he notes. "When it was over, Churchill took complete responsibility. A setback like that could have been paralyzing, but he was able to move forward to lead his country to victory in World War II."

The lesson, says Nohria, is that Churchill and other great leaders are pragmatists who can deal with difficult realities but still have the optimism and courage to act. "Enduring setbacks while maintaining the ability to show others the way to go forward is a true test of leadership," he asserts.

Jeff Bezos, founder and CEO of Amazon.com, has said that one of the key elements of being a good business leader is the capacity to tell the hard truths. "Leaders struggle with this problem all the time," says David Thomas. "From a leadership point of view, you always want to move toward telling the hard truths and helping people cope with the realities of change. But as a manager, you might be more inclined to minimize the complexity of a situation so things can run smoothly for as long as possible. It's often a judgment call."

The ability to render that judgment can sometimes make or break a company. "The phrase 'public confidence, private doubt' comes to mind," observes Joe Badaracco. "If leaders disclosed all their concerns and doubts, stock prices would plummet, their competitors would be all over them, and employees would be jumping ship. But even if you can't be absolutely open with everyone, leaders have to confront their companies' problems and, of course, share them with top management."

John Kotter underscores the positive potential of facing problems head-on. "Great leadership does not mean running away from reality," he argues. "Sometimes the hard truths might just demoralize the company, but at other times sharing difficulties can inspire people to take action that will make the situation better."