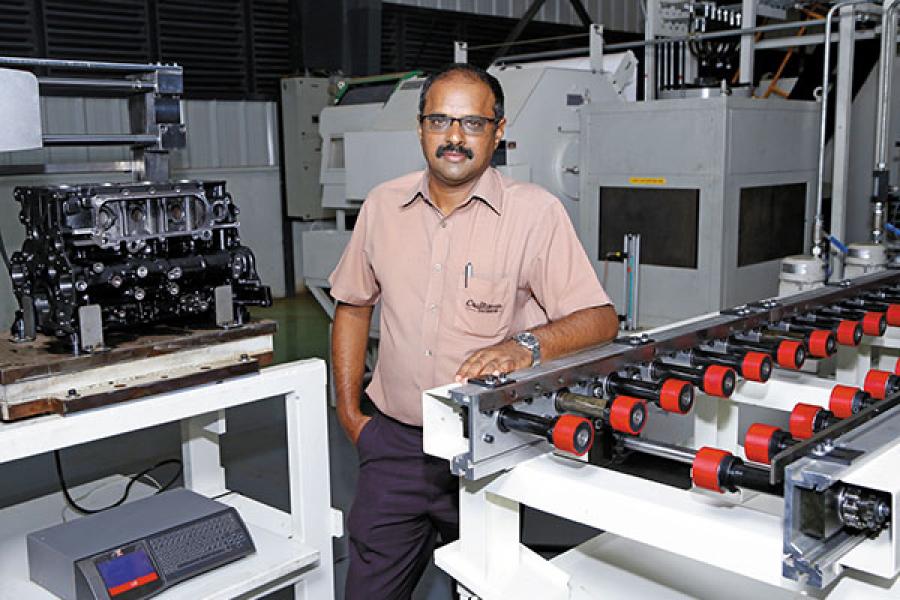 Image: Vijay T for Forbes India
Out of college, S Ravi had a choice: To look for a job or study outside Coimbatore, or stay back and start something of his own

“So, how’s business?” Ask any businessman this question and, often, you know what response to expect. “Good, very good, excellent, thank you.” But S Ravi, chairman and managing director of Craftsman Automation, said, “Not good.” He explained why: “The commercial vehicles market is looking tough and we don’t know how long it will continue like this. But tractors have done well for us. And we are in a much better position than we were at the time of the Lehman crisis.”

That’s Ravi for you: Positive and realistic at the same time. His company is no different.

Craftsman Automation, a diversified light engineering company was started by Ravi. Its central idea was to make things for others in a cheaper, more efficient way. Headquartered in Coimbatore, with 10 plants across India, Craftsman’s business is split almost 50:50 between automotive and non-automotive products. In the automotive vertical, it manufactures engine heads, blocks and transmission parts, including gear boxes for commercial vehicles, tractors, construction machinery and utility vehicles. Key customers are Daimler India Commercial Vehicles, Tata Motors, Ashok Leyland, Mahindra & Mahindra and JCB.

While Craftsman started out as an export-focussed company, today, domestic versus export revenues are split 75:25. In 2010, International Finance Corporation invested about Rs 162 crore, followed by Standard Chartered PE with around Rs 85 crore in 2012. Both picked up minority stakes.

The man behind it
At the age of 21, in 1984, S Ravi, a final year student of mechanical engineering had time to kill. That is when the idea of Craftsman Automation, a partnership between him and his college seniors, was born. “I had the opportunity to study further or look for a job outside because job opportunities were very limited here. The other option was to stay in Coimbatore and start out on my own. I chose the latter,” says Ravi.

Craftsman started as a vendor to manufacturing units in Coimbatore. “Then we started sourcing material, doing sub-assembly, making customer -based products, redesigning products and, finally, producing the products. We increased our manufacturing activity from machining to foundry and sheet metal,” adds Ravi. By 1990, he realised that growth opportunities were getting limited so he reached out to larger companies for alliances.

Over the next few years, he set up several businesses—manufacturing auto components, plastic parts, pressure dye casting, a textile unit. While this helped Craftsman grow, it also became too large and diversified to manage. “Around 10 years ago, I decided to quit everything and concentrate solely on Craftsman Automation. One by one, I have given all the other companies to my colleagues,” says Ravi. 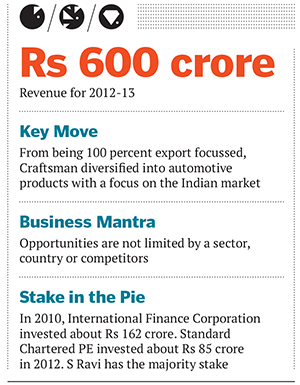 Why It Is A Gem
There are three reasons which make Craftsman a hidden gem. First is the entrepreneur himself. “I look at companies from a 4M perspective: Management, market, merchandise and model. Management is the most important. With Ravi, we found an entrepreneur who was focussed and had a very good understanding of the dynamics of the trade, both in India and abroad,” says Namit Arora, director, Standard Chartered PE.

Second is enterprise. “This is the fundamental theme of Craftsman: That we are not stuck to any sector, or constrained by saying that only this is our core competency,” says Ravi. Take, for instance, its entry in the auto business: In 2004, it had one automotive and one tractor customer; 2 percent of sales came from this sector, with exports accounting for 82 percent. “We grew fast in the auto business. From a turnover of Rs 2 crore in 2004 to around Rs 300 crore last year,” Ravi says.

The third factor is focus. Ravi believes that machining is a generic skill, whether it is for automotives, aerospace or a gearbox. “We would like to stay a learning company and keep our minds young. Otherwise, we will be following the herd, which is going only in one direction.”

There are not many examples of home-grown engineering companies in India that have made it big. But with a turnover of about Rs 600 crore, Craftsman seems poised for growth. Ravi says he wants to expand to about Rs 1,000 crore in the next three years. That is when he will be looking at a listing.

Arora seems to agree: “The bar for IPOs, in India, has become significantly higher. If you are sub-scale, there will be no investor appetite. So Ravi is building scale without limiting himself to any single sector, company or country.”

Why it was hidden
Craftsman has been under the radar for two reasons. One is location. Coimbatore is better known for textiles than engineering. While it has spread its wings outside the city, Craftsman is headquartered there. The second is brand. Engineering is not a business where companies have built brands. Almost everything Craftsman does is not sexy.

Risks and challenges
Craftsman has to grapple with the long slowdown in the automotive sector. The medium and heavy commercial vehicle business has been severely hit. But the tractor business has surprisingly seen growth of almost 11 percent, compared to the expected 5 percent. Craftsman’s exposure to the commercial vehicle business is about 13 percent compared to 20 percent in the tractor business. But the challenges, Ravi believes, are more organisational in nature: Keeping efficiency and productivity at a high level and constantly improving quality standards.