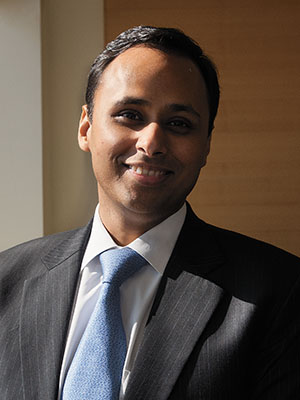 
B y 2002 Mumbai-based pharma firm Lupin, founded by former professor Desh Bandhu Gupta and known for its TB drugs, was already an emerging star. But with a market capitalisation of $108 million it wasn’t close to being as valuable as Dr Reddy’s Laboratories, which was at $1.7 billion.

One reason investors were not as hot on Lupin was it had no presence in the US whereas competitors like Dr Reddy’s had already latched on to the generics opportunity there. “We really had to come up with a good strategy for the US,” recalls Chief Executive Vinita Gupta, the founder’s daughter and the oldest of five siblings. Lupin had lost valuable years because the Guptas had made an unrelated diversification into real estate in the 1990s. “We’d lost our way,” admits Vinita’s younger brother, Nilesh, Lupin’s managing director.

In 2005 the Guptas plunged into the burgeoning US market, with Vinita leading the charge, and Nilesh assuming a bigger role at home. Since then Lupin—named after a flower that thrives even in barren soil—has blossomed again. Within a decade it has notched up US revenues of $706 million, 40 percent of its total sales. (It claims to be the fifth-largest, by prescriptions, generics firm in the US.)

Back in India, too, Lupin has climbed the ranks to become the third-largest (by revenue) domestic pharma company. This year it also entered the ranks of Forbes Asia’s Fabulous 50, a roster of Asia-Pacific’s best big listed companies. Patriarch Gupta, who owns 47 percent of the company, has seen his net worth jump to $3.3 billion on a 60 percent stock-price rise.

Lupin’s growth was spurred in part by a slew of company and brand acquisitions in the US and elsewhere. With 12 manufacturing plants—including two in Japan—the Guptas are now aiming for $5 billion in revenues by 2018.

Lupin got its start in 1968 as a small vitamin company with a $120 investment by Gupta. He refocussed on anti-TB drugs and became a global leader in this neglected segment, just as the scourge was about to show rising incidence in several parts of the world. “Lupin embodies my vision to fight life-threatening diseases by manufacturing drugs of the highest social priority,” says the 75-year-old Gupta.

This September he formally handed over the day-to-day running of the company to Vinita, 45, and Nilesh, 39. He is still chairman and appears at No. 19 on the India Rich List. Three other daughters aren’t in the business.

Gupta says his decision was a well-planned one. “Both Vinita and Nilesh have been a part of the business—and a part of Lupin’s growth plans for over 15 years now.” The two siblings say their association has been even longer. “We grew up listening about Lupin—Dad was extremely participative,” says Nilesh. “He would always share what was happening with the company.” The kids tagged along on business trips, too. “I went on a trip to Europe when I was 11 years old—during my summer vacation,” recalls Vinita. “I would sit in a corner observing my dad.” The family home, too, was a venue for visiting employees and pharma luminaries. 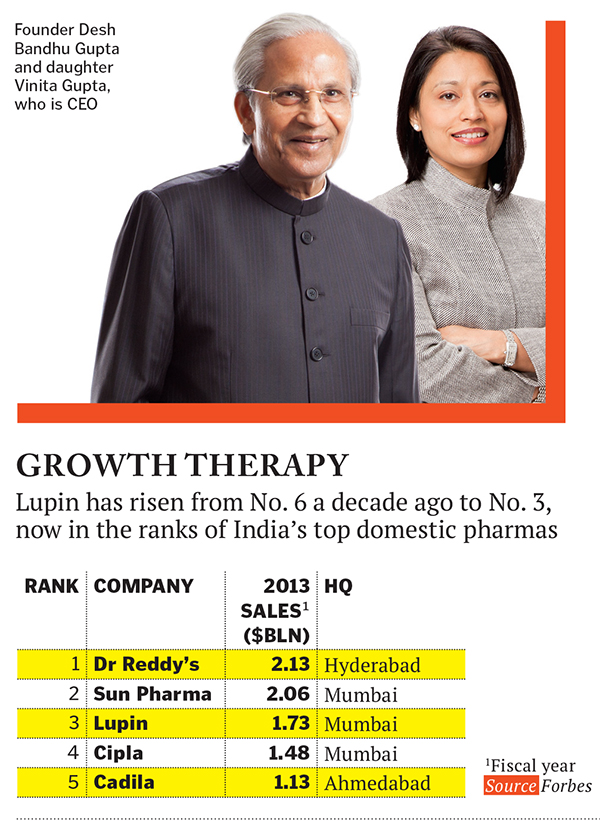 Gupta fondly notes that his daughter was always keen. “I don’t think that I could have kept Vinita away from Lupin, seeing how passionate she’s always been about it,” he says. Vinita joined the company in 1993 when she was 25. Armed with a degree in pharmacy from University of Mumbai, she went on to get an MBA from Northwestern’s marketing-heavy Kellogg School. After learning the ropes in different departments she dedicated herself to cracking open overseas markets.

Lupin was the last of the Indian drug majors to enter the US. Sun Pharma had made an acquisition there in 1997; Dr Reddy’s had filed its first new drug application around the same time and had gone on to list on the NYSE in 2001. Lupin debuted in the US by buying a brand called Suprax and relaunching it as a paediatric antibiotic. It broke even in the second year of operation. “Lupin grew the brand from scratch into an $80 million brand,” says Meeta Shetty, pharma analyst at Mumbai’s HDFC Securities. “Their branded business in the US is a big differentiation.”

On the generics side, which it entered in 2005, it’s now the leader in nearly half of its 52 offerings in the US. It sells everything from antibiotics to oral contraceptives. In the past year the company filed to make generics for 21 drugs—and received approvals for 14. As a next step, it is setting up a research centre in the US and has hired a clutch of senior hands from generics leader Teva and a top executive from Sandoz.

Alongside, Lupin made a successful foray into Japan. It made two acquisitions—in 2007 and 2011—and gets $250 million in revenues from there. “We got into the Japanese market at the perfect time, just as the government was pushing for generics. We have a first-mover advantage there,” says Vinita. Lupin has tripled its revenues from Japan over the last eight years. It has launched 11 products in the past year and has filed for 15 more for the next two years. “Lupin is the only successful Indian company in Japan—a very difficult market,” acknowledges Dilip Shanghvi, founder of competitor Sun Pharma.

But back in India—where it gets 25 percent of its revenues—Lupin is no better than second in therapy segments that it serves, be it cardiovascular, anti-diabetes or drugs for the central nervous system. “We want to get into a leadership position in at least one or two therapy areas in the next three years,” says Nilesh. “We are an Indian company, and we need to have the home advantage.”

Nilesh joined Lupin in 1996 with a chemical engineering degree from Mumbai’s prestigious Institute of Chemical Technology. He worked at the Mumbai office for four years, wetting his feet in manufacturing and supply chain management before heading to Wharton. On his return he moved to Pune, where he revved up the R&D division, working with a team of 150 scientists. (That number has now grown to 1,400.)

“I wanted to be away from my father’s shadow,” recalls Nilesh. “I wanted to take an area and make it my own, and that was research.” Since then Lupin has initiated and won patent challenges in the US against the likes of Abbott Labs, allowing it to sell drugs for blood pressure, diabetes and such. Today Lupin has 183 cumulative filings for new generic drugs—92 have been approved.

The pecking order at Lupin is clear. “Vinita is the boss,” acknowledges Nilesh. “But we work as a team.” This cross-border sibling partnership has its endorsers. “They are both extremely capable,” says Rakesh Jhunjhunwala, an ace Mumbai investor who took a stake in Lupin in 2002 and still holds it. “They make a perfect team. I think the best is yet to come for Lupin with all the growth in India, Japan and the US.”

Even as the sister-and-brother duo picks its way through the $242 billion global generic pharma market, they are dealing with shrivelling research pipelines, increased regulatory scrutiny and intensifying competition. The Gupta siblings are on their toes. Says Nilesh: “This is an industry where you can never afford to get lax. You must always have that lens and keep that granular vision.”

Tweets by @forbes_india
Four Scions to Watch Out For
Vikas Oberoi: The Working (Out) CEO