Devansh Jain: Flying with the wind

The Inox Group had no expertise in renewable energy, but backed by a successful IPO, third-generation scion Devansh Jain proved that there is profit in the sector 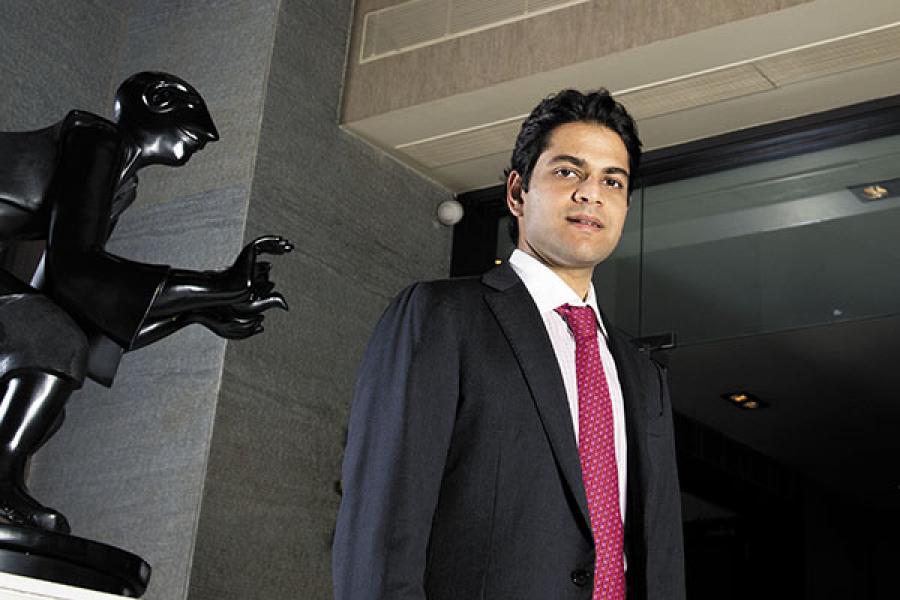 Image: Amit Verma
Devansh Jain says failure is not an option for him

No one can accuse Devansh Jain of false pride. In March 2015, the 28-year-old third-generation scion of Inox Group led one of the biggest initial public offerings (IPOs) that India has seen in the last two years. His company, Inox Wind, the renewable wind energy solutions provider, raised Rs 1,000 crore and was oversubscribed 18 times. “We have a market cap of almost a billion-and-a-half dollars,” says Devansh, who, as director of his company, is the youngest family member to hold a position in the chemicals-to-multiplexes Inox Group. 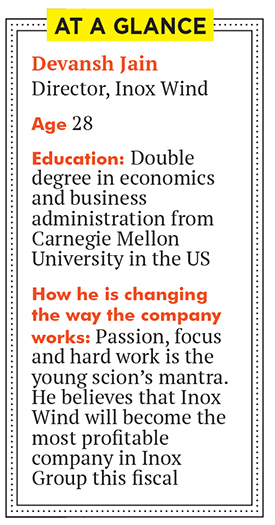 Inox Wind not only manufactures key wind turbine components, but also provides turnkey solutions to wind farm projects through its wholly-owned subsidiaries, Inox Wind Infrastructure Services Limited (IWISL) and Marut-Shakti Energy India Limited (MSEIL). But renewable energy was not Devansh’s area of specialisation; he has a double degree in economics and business administration from Carnegie Mellon University in the US.

When he returned to India from the US in 2007, he shadowed his father Vivek (managing director, Gujarat Fluorochemicals Limited) for two years before deciding to enter the renewable energy sector. Neither his father nor his uncle Pavan (chairman and managing director of Inox Air Products) had prior experience in this sector. But the Inox Group was looking to diversify, and given India’s energy deficit and the global thrust towards cleaner forms of energy, Devansh convinced his family of the power of wind.

With a corpus of Rs 40 crore borrowed from Gujarat Fluorochemicals Limited, he started Inox Wind in 2009, at a time when major players like Suzlon and Bharat Forge were stumbling. And in five years, he steered the company onto the path of profitability—a rarity among local wind energy firms. A strong current order book of 1,200 megawatts (MW) and investor confidence place Inox Wind, and Devansh, in a sweet spot. He is confident of its continued success. “Inox Wind is set to become the most profitable company in the ($4 billion) Inox Group this fiscal,” he tells Forbes India.

Devansh believes he cannot afford to fail because of the robust reputation that the Inox Group enjoys. “Some people may say, ‘You are born with a silver spoon’, but it is very easy to lose it all in the third generation,” he says.

One of the biggest challenges he faced was an unanticipated policy shift: In 2012, barely three years after Inox Wind was set up, the then Congress government withdrew key benefits, including a generation-based incentive. “Renewables is something that is driven by policy and political intent. But from 2010-2013, there was policy paralysis in the country. Infrastructure was dead, and wind is clearly a part of infrastructure,” he says.

Initially, the name ‘Inox’ worked against him because of its strong branding in the entertainment industry through its multiplex arm, Inox Leisure. “We had to convince them (investors) that we were a technology company with the infrastructure in the heavy duty wind power industry,” says Devansh.

There were other teething problems, too, such as getting industry specialists to join the company, acquiring a massive land bank, getting the right technology, executing projects and building a brand in the market.

Not one to be bogged down by challenges, Devansh decided to ride out the storm. “Failing was never an option for me,” he says.

In retrospect, he feels that what helped him achieve this success was his decision to improve cost efficiency, have a lean team, constantly renegotiate the supply chain, and look at anything and everything which spells profitability. “It’s about passion, focus and hard work,” he says.

So far, analysts have been positive about Inox Wind. A 2015 Motilal Oswal report on the company notes that its “strong relationship with independent power producers (IPPs) and global technology leaders, coupled with a ready pipeline of project sites and strategically located manufacturing units, have enabled it to benefit from the wind market revival”.

Devansh is excited about the future given the present government’s focus on renewable energy. “We are doing a lot of projects in Madhya Pradesh and Gujarat, and a few in Andhra Pradesh and Rajasthan this year.” Apart from these, Inox Wind is building a massive wind turbine complex in Madhya Pradesh. “It will be one of Asia’s largest blade plant in terms of size and production capacity. We intend to keep growing this business 15-20 percent year on year,” he says.

He’s already looking for the next big opportunity. “I think Inox Wind has reached a stage where it is very strong and the management team is rock solid. It is virtually on autopilot. So now I am trying to figure out what’s going to be the next avenue for me to build on,” he says.

This Jain sure knows how to turn the wind in his favour.

(This story appears in the 29 October, 2015 issue of Forbes India. To visit our Archives, click here.)