Gender diversity can be a polarising topic in big companies. Swiss Re holds some important lessons on how to foster a diverse environment with flexibility and inclusiveness for everyone

Nia Joynson-Romanzina, the head of Global Diversity and Inclusion at Swiss Re, likens people in her organisation, and beyond, to icebergs. Not because they're cold but because there is a diversity in what is visible, from physical appearance, gender, race and age, and also a wealth of diversity underneath the surface. True diversity, she says, means embracing the invisible, as much as the visible. Understanding the invisible has also become central to shaping a diverse and inclusive culture at the company.

“We are all diverse,” Joynson-Romanzina  explains. “So when we talk about diversity it is about how each of us can bring our individual selves to the work place. If you can be who you are and you feel included and accepted your motivation and ideas will help the company’s success now and in the future. A diverse workforce will make us more competitive and stronger.’” 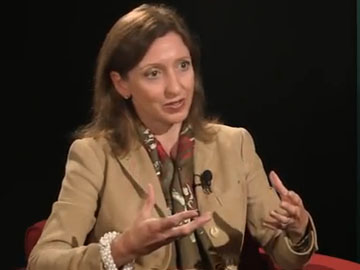 Professor Herminia Ibarra
Diversity journey
Joynson-Romanzina embarked on a journey three years ago to transform the company’s thinking on diversity and inclusion. Many companies have implemented far reaching gender diversity initiatives without seeing much by way of results.

Knocking on doors and talking to executive committee members and group board members she started to uncover how they thought about diversity. “It became very clear that we were divided into two camps,” she told me in an interview. “One wanted to get more women in leadership, the other camp said ‘if this is all about women, count me out’. I realised very quickly that this is a very polarising topic.’”

But there was one thread that everyone seemed to agree upon. There was a broad based commitment to diversity of thought and opinion, which brought everyone together.

“That gave me an understanding of the extent to which gender diversity can be polarising while the notion of diversity of thought and opinion was something that everybody could buy into. It evolved naturally into a discussion around inclusion,” she said.

Challenges and successes
This initial exchange started to form the basis of Joynson-Romanzina’s group-wide strategy and action plan to address diversity shortfalls and enhance the inclusion of employees. Swiss Re was already a diverse company, but unconscious biases were discouraging employees from grabbing the next rungs on the ladder or creating the most inclusive teams, as she soon found out.

A chance to show what was possible came her way with the appointment of a new, change-minded CEO to head a Swiss Re business. The executive was convinced that more diversity of viewpoints, gender, culture, education -- you name it – on his team, would mean more client-centricity, his ultimate goal. Although the business was doing well, he opened up all of the most senior management positions, encouraging everyone in the layer below to apply.

With applications about to close, he noticed that virtually no women were vying for the jobs. Puzzled, he consulted with Joynson-Romanzina who told him he just had to ask. “Research shows that women are less likely to feel qualified, even when they are,” she explained. “You need to go out and tell women, and men, very specifically that they should be applying. Tell them there is no guarantee that they will get the job, but they should at least apply.”

He extended the application deadline and brought on board a diverse hiring team that was put through unconscious bias training. Joynson-Romanzina was invited to participate in the decision making to challenge any unconscious biases and ensure an equal playing field for all. The end result? Everyone agreed that the best person got each job and the executive team got more cross functionality, generational balance, and women: 40 percent up from 17 percent before the exercise.

Include first, and the numbers will follow
In our world of facts and data many companies define the success of their gender diversity initiatives based on numbers.  But what if the one woman you just promoted to the board suddenly leaves? In Joynson-Romanzina’s strategy, numbers and quotas are not included: “We don’t use numbers as a measure of success, it’s an indicator. This is about changing mindsets.” The number focus distracts from the fundamental and long-term change that has to happen. This is all about creating an environment where people can develop regardless of their gender, age and race so that inclusion becomes systematic at all levels.

While organisations are increasingly building awareness of gender stereotypes, many are having trouble moving from awareness to action. As Joynson-Romanzina explained to us, simple actionable steps can add up to a big difference. “You can do some really small things, such as what we call the ‘gender nudge.’ For example, if we’re building a project team and I see that the gender balance is not where I think it should be, I give it back and say ‘come back when you have a better balance.’”

Three Pillars
The “global inclusion framework” Joynson-Romanzina developed has three pillars. The first is “Inclusive Leadership,” shaping the narrative and expectations of what leaders should be like and how they should behave with the belief that effective and inclusive leadership will encourage inclusive employees.

The second pillar, “Own the Way You Work”, addresses employees' agility to decide how, when and where they carry out their tasks, recognising that one size does not fit all and that working smarter is better than working longer. But, as Joynson-Romanzina puts it, “if you’re a bus driver you can’t work from home.” Choices must take into consideration the impact on the team as a whole. “It is about the team not the individual. It is about trust, respect, and dialogue within the team.  If I know what you are doing, how you are doing it, where you are doing it and your preference in how you work I will have greater trust that you are pulling your weight.”

The third pillar, “Smashing Stereotypes, Opening Minds” actively addresses unconscious bias (not just towards people ‘unlike us’ but also positive bias towards those who are ‘like us’) and provides tips and tools on how to identify and address them. This pillar takes into account Joynson-Romanzina’s “Iceberg of Differences”, the visible diversity of its people –gender, physicality, age etc – as well as the invisible differences –beliefs, education, status, culture, and the whole gamut of facades that you cannot see, that each of us has and makes us who we are.

Bottom up meets top down
The framework is put into practice through the company’s Diversity & Inclusion Champions who sit on the executive teams of Swiss Re’s various business units, functions and divisions as well as through its vast network of employee groups which all focus on the inclusion strategy.

All in it together
While not specifically aimed at gender diversity there is a focus on women in leadership roles with the belief once the gender issue is addressed the results will snowball into other demographic groups addressing any organisational unconscious bias and smashing stereotypes.

Gender diversity is not a women’s issue but about changing mindsets. At Swiss Re it’s also not about “fixing” the women but creating the right culture for women leaders to grow. But, “sidelining men while trying to improve the status of women is simply wrong-headed,” she says

Three years on, Joynson-Romanzina sees progress consistent with the firm’s core values. “At Swiss Re ensuring the greatest diversity of assets and liabilities makes our business model efficient so why wouldn’t we apply the same principle to our most important asset – our people.”

Herminia Ibarra is Professor of Organisational Behaviour and The Cora Chaired Professor of Leadership and Learning at INSEAD. She is also the Programme Director of The Leadership Transition, part of INSEAD’s portfolio of Executive Education Programmes.

Tweets by @forbesindia
The Thinker Interview with Philip Kotler, the Father of Marketing
Hedge Hogs