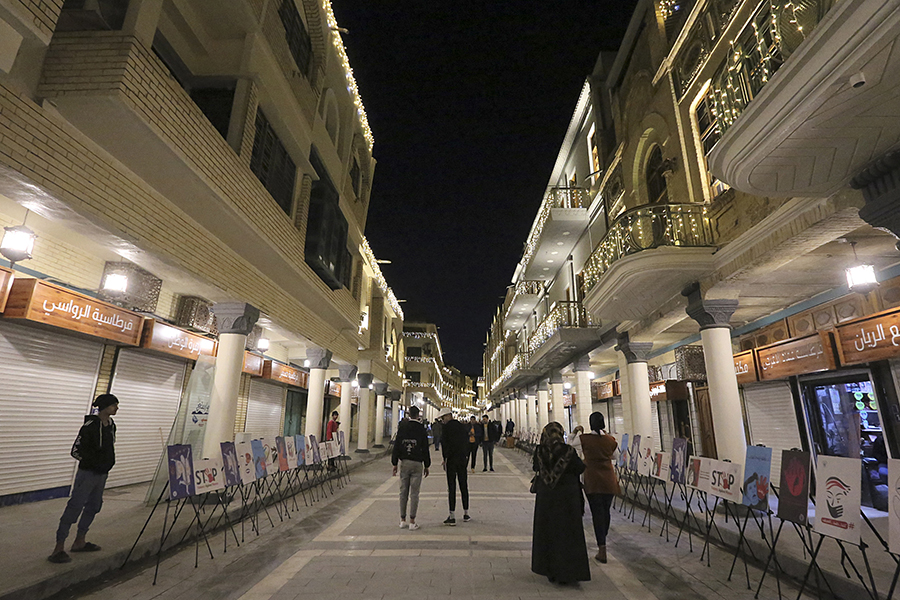 The road is lined with shops, freshly-painted and sparkling, but most were closed.
Image: Sabah Arar / AFP

The Iraqi capital Baghdad on Saturday celebrated the renovation of the historic heart of its book trade, in the latest sign of an artistic renaissance after decades of conflict and strife.

In a city where explosions once could mean only one thing—violence—colourful fireworks lit up the sky during festivities organised by Baghdad municipality to inaugurate the renovated Al-Mutanabbi Street.

Its new look comes alongside art exhibitions, gallery openings, book fairs and festivals reflecting a fledgling cultural renaissance, and recalling a golden age when Baghdad was considered one of the Arab world's cultural capitals.

Al-Mutanabbi Street was first inaugurated in 1932 by King Faisal I and named after the celebrated 10th century poet Abul Tayeb al-Mutanabbi, who was born under the Abbasid dynasty in what would become modern-day Iraq.

A narrow street in the heart of old Baghdad, Al-Mutanabbi has long drawn students and young people, usually on Fridays. But it is also frequented by intellectuals and older bibliophiles.

Normality still hangs by a thread in the Iraqi capital, where rocket and drone attacks sometimes target its highly fortified Green Zone, and where a July suicide attack on a market killed more than 30 people.

There was high security for the costumed performers and musicians who performed along the car-free road of new cobblestones.

The road is lined with shops, freshly-painted and sparkling, but most were closed. Fairy lights garlanded the ornate brick facades and wrought iron balconies.

Private-sector banks financed the work, which began in August.

"Since the 1960s, I would come here every week to look at the books on the stalls and to meet friends," veteran journalist and writer Zoheir al-Jazairi told AFP, delighting over the street's latest transformation.

"It's an islet of beauty in the heart of Baghdad. You notice the difference compared to the rest of the city," he said, lamenting the oft-neglected heritage of the capital.

Stretching for just under one kilometre (0.6 miles), the street begins with a statue of its namesake overlooking the Tigris River and ends with an arch adorned with the poet's quotes.

There are titles in an array of languages, and every once in a while a hidden treasure can be found nestled between the selections.

The rise of the Islamic State jihadist group in 2014 saw more brutality and bloodshed.

Iraq is trying to recover from its years of violence but remains hobbled by political divisions, corruption and poverty.

Even Al-Mutanabbi Street, a centre of intellectual life with its cafes and books, could not escape the past violence.

Mohamed Adnan, 28, took over a bookshop from his father, who died in the blast.

"He was killed, our neighbours too and several others who are dear to us," said the history graduate, welcoming the renovation.

"I wish those who left were alive to see how the street has transformed," he said.

On the banks of the Tigris a singer hummed traditional ballads, beneath the fireworks.

Tweets by @forbesindia
Storyboard18 - 2022 - Definitely, maybe: Year of creators, NFTs, DEI and sustainable brands
Best of 2021 Ep. 7: Magnus Ewerbring at Ericsson on the potential for 5G to usher in a new wave of innovation