BTS may be able to perform during military service: S Korea defence minister

The spectre of conscription has long hovered over BTS, with its seven male stars ranging in age from 24-year-old Jungkook to Jin, 29, who must sign up by next year or risk jail time 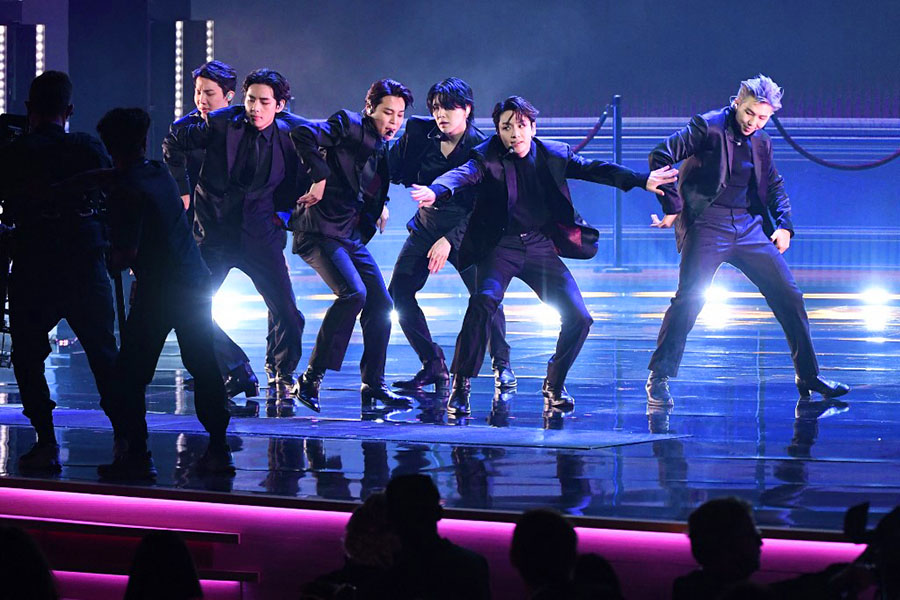 South Korean boy band BTS performs onstage during the 64th Annual Grammy Awards at the MGM Grand Garden Arena in Las Vegas on April 3, 2022. The lack of exemptions for BTS, who are credited with generating billions of dollars for the South Korean economy, has sparked fierce debate in the past. Image: VALERIE MACON / AFP

K-pop sensations BTS may be allowed to continue performing and preparing for international concerts even while they undertake their mandatory military service in South Korea, the defence minister said Monday.

All South Korean able-bodied young men under the age of 30 must perform around two years of military service, mainly due to the fact that the country remains technically at war with nuclear-armed North Korea.

The spectre of conscription has long hovered over BTS, with its seven male stars ranging in age from 24-year-old Jungkook to Jin, 29, who must sign up by next year or risk jail time.

Defence Minister Lee Jong-sup said during a parliament session that it could be in the national interest to find a way to keep the global stars on stage during their time in South Korea's military.Also read: As BTS ponders its future, South Korea's economy warily takes note

"I think there will be a way to give them time to practice in the military and to allow them to perform together if there is an overseas performance scheduled," he said.

"Since many people value the fact of serving in the military itself very highly, it could be more helpful for their popularity," he added, responding to a lawmaker's question on the topic.

South Korea grants exemptions from military service to some elite athletes, such as Olympic medallists, and classical musicians—but pop stars do not qualify.Also read: From '2 Cool 4 Skool' to 'Butter' to UN and White House, BTS' 9 years on top

The lack of exemptions for BTS, who are credited with generating billions of dollars for the South Korean economy, has sparked fierce debate in the past.

Who does—and does not—undertake military service is a highly-charged issue in South Korea.

Refusing to serve is a crime, and can lead to imprisonment and social stigma, but even so some South Koreans go to extreme measures—trying to gain weight or having unnecessary surgery, for example—to evade service, AFP has reported.Also read: How mandatory military service is a thorn in the side of K-pop

BTS have not shown any signs of trying to evade the draft.

"As a South Korean young man, I believe military service is a natural course. And as I have always said, I will answer the country's call whenever it comes," Jin said in 2020.

The group had already benefited from a 2020 revision to South Korea's conscription law, which moved the age limit for some entertainers to sign up from 28 to 30 years old.

A majority of South Koreans—59 percent—favour expanding military service exemptions, but there is staunch opposition from young men who have already done it, local reports say.