In one day, the group's label HYBE saw its market value decline $1.7 billion. The drastic plunge underscores how South Korea's bestselling boy band has become not only a cultural sensation but also a powerful stakeholder in South Korea's economy 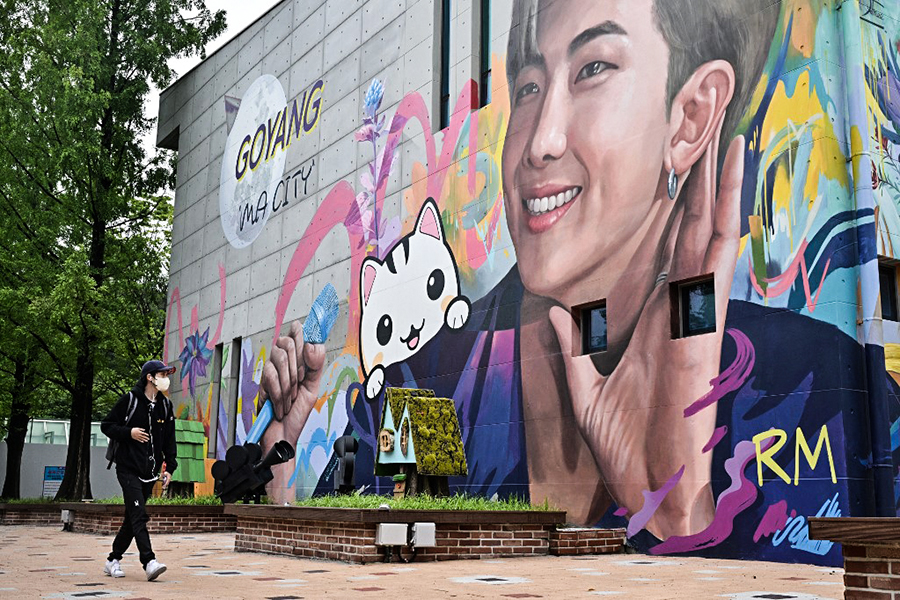 A man walks past a mural depicting RM, a member of K-pop group BTS, in Goyang, northwest of Seoul, on June 15, 2022. (Photo by Anthony WALLACE / AFP)

The fallout from BTS’ announcement on Tuesday that the K-pop juggernaut would be taking a break as members explore solo careers was immediate and drastic.

In just a day, the stock price of the group’s management label, HYBE, plummeted 28% to 139,000 won ($108) — its lowest price since the company went public nearly two years ago, shedding $1.7 billion in market value. The stock price has barely moved since.

The drastic plunge underscores how South Korea’s bestselling boy band has become not only a cultural sensation but also a powerful stakeholder in South Korea’s economy.

Since the group’s debut in 2013, BTS has raked in billions of dollars through album sales, concert tickets and social media. Its YouTube channel alone, which is the 20th largest in the world, can generate up to $2 million a month. By 2020, the group was contributing $3.5 billion annually to the nation’s economy, according to the Hyundai Research Institute.

Even during the pandemic, which devastated the live concert industry, BTS drove a 58% increase in HYBE’s revenue, according to the company’s year-end reports for 2021. The label raked in 1.3 trillion won last year.

The group’s financial contribution to South Korea’s economy had only been expected to grow as pandemic restrictions eased, according to the Korea Culture and Tourism Institute, which predicted that a single BTS concert could generate upward of $500 million or more.

News of the group’s planned hiatus convulsed the internet once the group posted its video announcement, which drew over 16 million views in two days. The group’s fans, who call themselves Army, swarmed social media in expressing support — and anguished distress — over the news.

“Thank you BTS for being our home, for your beautiful music that enlightens our life, for your love & happiness to us,” one Twitter user posted. “We’ll support you. We’re always here for you. We’ll wait for you. ARMY FOREVER. We love you.”

Fans were particularly confused by the term “hiatus,” which was used in the English translations in the original video. Reports in South Korean media outlets were quick to link the announcement to the fact that Jin, the oldest member of the group, would need to enlist for mandatory military service by the end of this year.

Speculation about the group’s possible disbandment led to a quick backpedaling of statements by the label and the group members themselves.

News organizations reported the group was not taking a hiatus, but that group members were pivoting to focus more on their individual careers. The group will “remain active in various different formats,” according to the statement.

RM, the group’s leader, posted on the social media site Weverse on Thursday, saying that many people had sent him messages assuming the group was breaking up.

“Although it’s not like I didn’t anticipate this or was oblivious that this could happen, I still feel bitter,” he said, explaining that his intentions were to communicate openly with fans on the group’s reflections of the past decade and not to announce that the group was disbanding.

Jungkook, the youngest BTS member, also tried to clarify matters in a live video stream on Thursday. “We don’t have any thoughts of breaking up,” he said, adding that BTS still had plans to perform in the future.

In Tuesday’s announcement video, members gathered around a table and spoke candidly about the intense pressures they face to constantly churn out music and deliver, ultimately leading to their decision to temporarily pursue solo careers.

“I felt like I was trapped and couldn’t get out,” said Namjoon, who explained that he felt the years of constantly being in the spotlight as a K-pop idol didn’t leave him much room for personal growth.

Tweets by @forbesindia
Photo of the day: On the path of fire
Bored Ape floor drops below $100K as NFT market takes a huge hit