Berlinale organisers have opted for an 11-day, in-person celebration of new movies and a gala ceremony to award its Golden Bear top prize 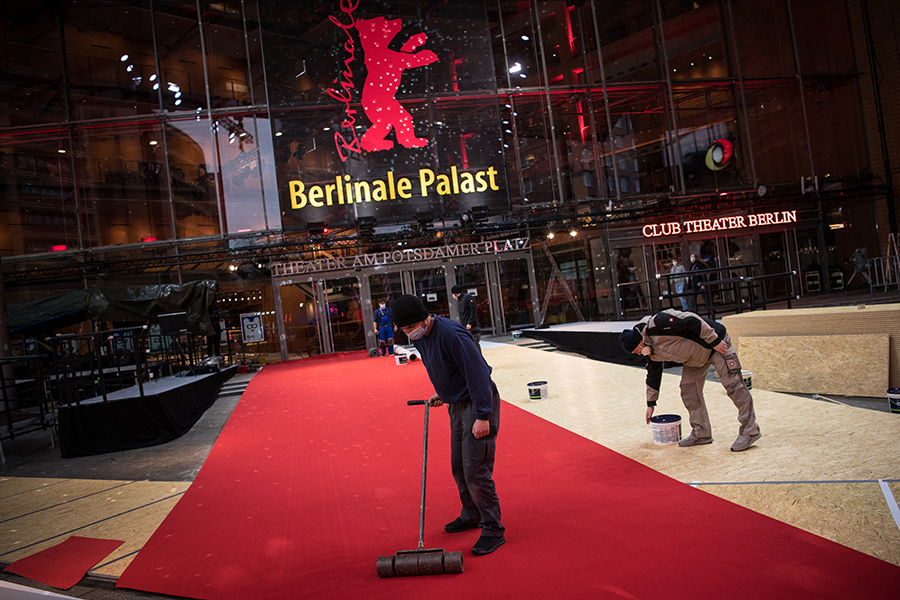 Workers set up the red carpet on February 08, 2022 at the Berlinale Palace in Berlin, prior to the opening of the 72nd Berlinale film festival.
Image: Stefanie Loos / AFP

Just as the coronavirus outbreak roars toward its peak in Germany, Berlinale organisers have opted for an 11-day, in-person celebration of new movies and a gala ceremony to award its Golden Bear top prize.

The festival said it was crucial to give cinemas a boost when Covid-19 fears had fuelled home viewing on small screens, and the German government called the "courageous" step of holding the event "a sign of hope".

Artistic director Carlo Chatrian said the Berlinale aimed to give weary audiences a break and some inspiration.

"Never before we have seen and welcomed so many love stories as this year—crazy, improbable, unexpected and intoxicating love, which is after all what all encounters are about deep down."

In competition are 18 films from around the world from hot young auteurs and cinema veterans—including seven directed by women. More than 200 other pictures are showing in sidebar sections.

Autograph seekers will be banned from the red carpet but stars including Emma Thompson, Sigourney Weaver, Charlotte Gainsbourg, Juliette Binoche, Isabelle Huppert and Mark Rylance have been invited to present their latest films.

Huppert will also pick up a Golden Bear for lifetime achievement.

In keeping with its tradition as the most politically minded of the big festivals, the Berlinale will turn the spotlight on conflict zones including South Sudan, the Central African Republic, Myanmar and eastern Ukraine, with a slew of new documentaries.

Plus "This Much I Know To Be True" will show how Australian rocker Nick Cave stayed creative under lockdown.

The Berlinale ranks among Europe's top festivals alongside Cannes and Venice, which also went live last year but during ebbs in the pandemic.

The recent Sundance and Rotterdam festivals were forced by Covid to go entirely virtual and many expected Berlin to follow suit.

But after an all-online festival last March, followed by outdoor screenings in the summer, the Berlinale worked with authorities to develop crowd safety measures.

The decision has caused controversy, with local media asking how organisers could justify it while the virus has closed hundreds of creches and hospitals strain under the outbreak.

The B.Z. tabloid said the festival seemed to be getting "extra sausage"—German for special treatment—while public broadcaster RBB called it "delusional" and newspaper Tagesspiegel warned: "The virus will be pleased".

Industry insiders noted that the festival's requirements on vaccination, daily testing and reduced capacity marked a valiant effort but wondered if it was all worth it.

"Berlin is quite well organised. The safety measures are top notch so if anyone could pull it off successfully and safely, they can," Scott Roxborough, Europe bureau chief for The Hollywood Reporter, told AFP.

"But it's a question as to whether it was necessary or sensible to do it."

He said Berlin, as the first major global cinema showcase of the year, was trying to live up to a responsibility to promote daring new movies against the odds.

"There's been a massive success of the latest 'Spiderman'—one of the most successful films of all time now—despite the pandemic," he said.

He said independent films, by contrast, had suffered.

"I think that's making the industry very concerned about the future," Roxborough said.