Today, the vast Ebrie lagoon which abuts Ivory Coast's economic capital Abidjan is a sick and sorry sight, choked by plastic pollution and ravaged by sand extraction and unbridled development 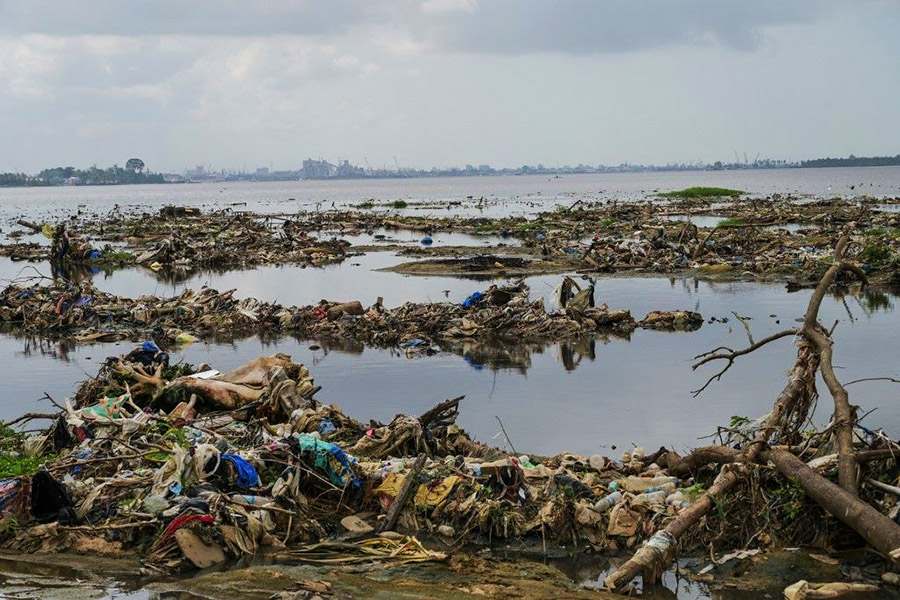 Urban and industrial waste from Yopougon, Abidjan's biggest district, has transformed his village of 3,000 inhabitants into an open dump. Image: Sia KAMBOU / AFP

It was once a jewel of West Africa -- the "Pearl of Lagoons," people liked to call it. Today, the vast Ebrie lagoon which abuts Ivory Coast's economic capital Abidjan is a sick and sorry sight, choked by plastic pollution and ravaged by sand extraction and unbridled development.

Named after an ethnic group that lives on its banks, the lagoon covers 120,000 hectares (297,000 acres), mostly separated from the Atlantic Ocean by a strip of land.

Old-timers wax nostalgic about the days when its waters were a pristine aquamarine and mangroves teemed with fish and wildlife.

Today, the shoreside village of Beago exemplifies a nightmarish problem with plastic.

Discarded bottles, wrappers and other plastic rubbish smother the banks for at least a kilometre (more than half a mile).

"The situation is alarming. There are no more fish because of the pollution -- fishing has been abandoned," said the village chief Paul Abe Blessoue, 73.

Urban and industrial waste from Yopougon, Abidjan's biggest district, has transformed his village of 3,000 inhabitants into an open dump, he said.

"If we are not careful, Beago could disappear in a few years, abandoned by its inhabitants," he said.

Discarded plastic typically enters the marine environment from rivers or drains or by the wind. Once there, it becomes a notorious problem.

Larger pieces can choke seabirds and mammals, and after biodegradation that can take years, tiny fragments may enter the food chain at the smallest level.Also read: A French designer has created an eco-friendly sneaker from seafood waste

Many rich economies are trying to crack down through such measures as banning single-use plastic bags, launching awareness programmes and sorting rubbish to encourage recycling.

But in Ivory Coast, as in many developing countries, little such headway has been made.

The country of 26 million produces 460,000 tonnes of plastic waste each year, said Yaya Kone, CEO of recycling company Coliba Africa.Also read: How much microplastic do we breathe, eat, drink?

Of this, 290,000 tonnes come from Abidjan, where some six million people live.

"Only three percent is recycled and used again," he said.

The rest "ends up in nature, especially the lagoon and the sea."

One of the biggest expanses of brackish water in Africa, the lagoon stretches far through countryside west of Abidjan to the Azagny National Park.

"Plastic is the (lagoon's) biggest pollution source," said Ayenon Seka, from the Institute of Tropical Geography at the University of Cocody in Abidjan.

But plastic is not the only ill.Also read: In the ocean, it's now snowing microplastics

Around Bietry Bay, pollution has been compounded by industrial extraction of sand and anarchic development.

"Bietry Bay is a dead bay -- it is extremely polluted, a real environmental disaster," said businessman Bernard Derrien, 76, who has lived in the area since 1998.

Gerard Frere, a Frenchman who has lived in Abidjan for 67 years and owns a hotel in the bay, remembered the old days with nostalgia.

"Bietry used to be a corner of paradise -- now it is poto-poto," said Frere, using a term for muddy terrain infested with mosquitoes and exposed to flooding.

A specialist in sports fishing, Frere said pollution had halved his turnover.

"The floor of the lagoon is carpeted with plastic waste 30 centimetres (a foot) thick," he said.Also read: Microplastics have entered the human bloodstream

Voices are being raised to reverse the lagoon's catastrophic decline, with some, like Derrien, demanding a massive sewerage network to ensure that water entering the lagoon from Abidjan is clean.

Residents in Bietry district have launched an association, Abidjan Ma Lagune, and Kone's company is launching a training programme for as many as 6,000 plastic rubbish collectors.

But public awareness is still far behind, said Kouadio Affian, an oceanographer at the University of Abidjan.

"People don't realise that when they throw away a plastic bottle in the street, it could end up in the lagoon," he said.