The World Health Organization accused the industry of causing widespread deforestation, diverting badly needed land and water in poor countries away from food production, spewing out plastic and chemical waste as well as emitting millions of tonnes of carbon dioxide 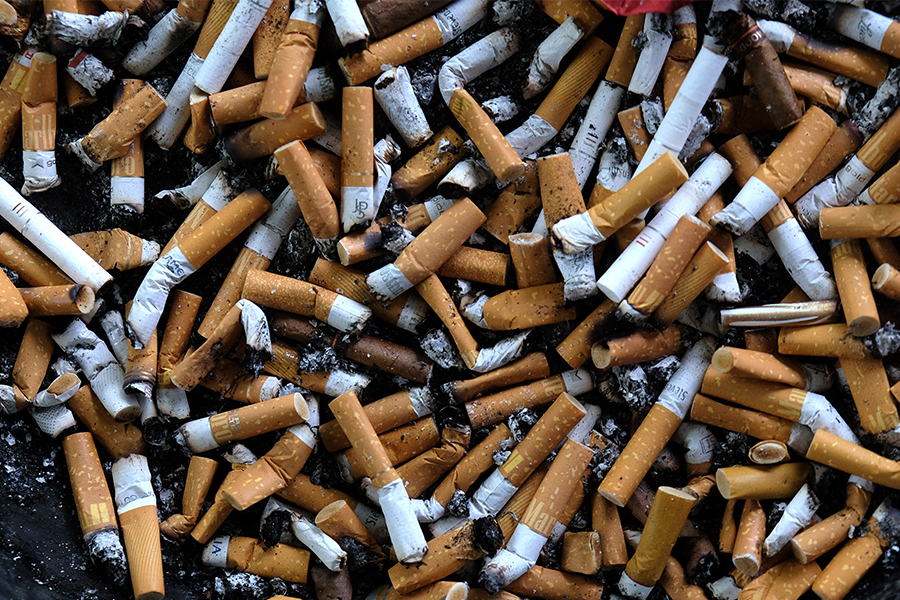 An ashtray filled with cigarettes butts is seen on an outdoor smoking stand at a busstop in Bremerhaven, northern Germany. (Credits: PATRIK STOLLARZ / AFP)

The tobacco industry is a far greater threat than many realise as it is one of the world's biggest polluters, from leaving mountains of waste to driving global warming, the WHO charged Tuesday.
The World Health Organization accused the industry of causing widespread deforestation, diverting badly needed land and water in poor countries away from food production, spewing out plastic and chemical waste as well as emitting millions of tonnes of carbon dioxide.
In its report released on World No Tobacco Day, the UN agency called for the tobacco industry to be held to account and foot the bill for the cleanup.

The report, "Tobacco: poisoning our planet", looks at the impacts of the whole cycle, from the growth of plants to the manufacturing of tobacco products, to consumption and waste.
While tobacco's health impacts have been well documented for decades—with smoking still causing more than eight million deaths worldwide every year—the report focuses on its broader environmental consequences.
The findings are "quite devastating," Ruediger Krech, WHO director of health promotion, told AFP, slamming the industry as "one of the biggest polluters that we know of."
The industry is responsible for the loss of some 600 million trees each year, while tobacco growing and production uses 200,000 hectares of land and 22 billion tonnes of water annually, the report found.
It also emits around 84 million tonnes of carbon dioxide, it said.

In addition, "tobacco products are the most littered item on the planet, containing over 7,000 toxic chemicals, which leech into our environment when discarded," Krech said.
He pointed out that each one of the estimated 4.5 trillion cigarette butts that end up in our oceans, rivers, sidewalks and beaches every year can pollute 100 litres of water.
And up to a quarter of all tobacco farmers contract so-called green tobacco sickness, or poisoning from the nicotine they absorb through the skin.
Farmers who handle tobacco leaves all day consume the equivalent of 50 cigarettes worth of nicotine a day, Krech said.
This is especially worrying for the many children involved in tobacco farming.
"Just imagine a 12-year-old being exposed to 50 cigarettes a day," he said.
Most tobacco is grown in poorer countries, where water and farmland are often in short supply, and where such crops are often grown at the expense of vital food production, the report said.
Tobacco farming also accounts for about five percent of global deforestation, and drives depletion of precious water resources.

At the same time the processing and transportation of tobacco account for a significant share of global greenhouse gas emissions—with the equivalent of one-fifth of the global airline industry's carbon footprint.
In addition, products like cigarettes, smokeless tobacco and e-cigarettes also contribute significantly to the global build-up of plastic pollution, WHO warned.
Cigarette filters contain microplastics—the tiny fragments that have been detected in every ocean and even at the bottom of the world's deepest trench—and make up the second-highest form of plastic pollution worldwide, the report said.
And yet, despite tobacco industry marketing, WHO stressed that there is no evidence filters provide any proven health benefits over smoking non-filtered cigarettes.
The UN agency urged policy makers worldwide to treat cigarette filters as single-use plastics, and to consider banning them.
It also decried that taxpayers around the world had been covering the towering costs of cleaning up the tobacco industry's mess.
Each year, China for instance dishes out around $2.6 billion and India around $766 million, while Brazil and Germany pay some $200 million each to clean up littered tobacco products, the report found.
WHO insisted that more countries should follow the so-called Polluter Pays Principle, as in France and Spain.
It is important, Krech said, that "the industry pay actually for the mess that they are creating."
By Nina LARSON
© Agence France-Presse

Tweets by @forbesindia
Put women entrepreneurs at the forefront to help the climate challenge: Climate Collective's Pratap Raju
Climate change is here. And so are green education and jobs