Jin—whose full name is Kim Seok-jin—reported to a frontline boot camp in Yeoncheon on Tuesday to begin his five-week training, kickstarting 18 months of military service 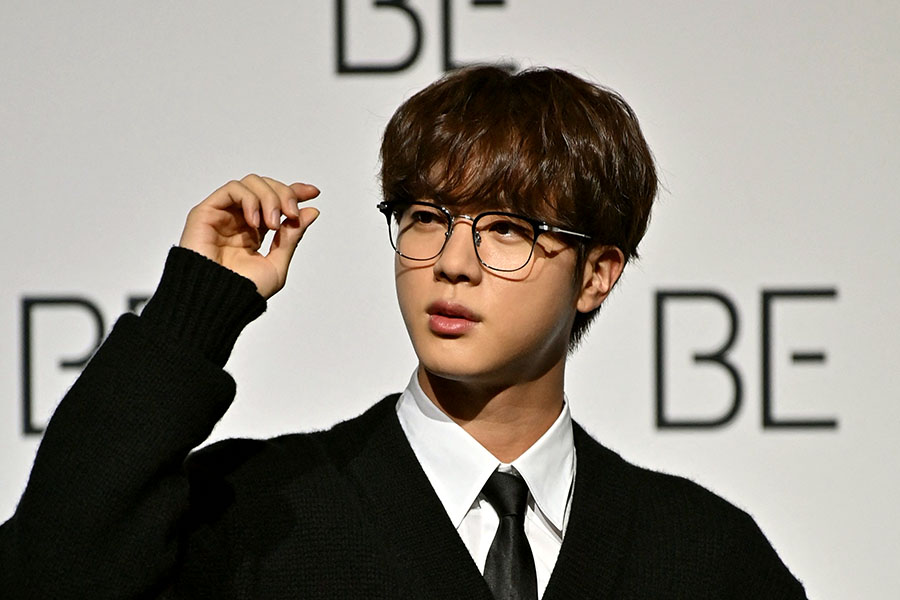 The septet is widely considered the country's biggest-ever cultural phenomenon, selling out stadiums around the world and dominating the charts while raking in billions and building a global legion of fans known as ARMYs.

But all able-bodied men in South Korea must serve at least 18 months in the military and, while there was a years-long debate about whether BTS deserved an exemption, they confirmed in October that all members will enlist.

Jin—whose full name is Kim Seok-jin—reported to a frontline boot camp in Yeoncheon on Tuesday to begin his five-week training, kickstarting 18 months of military service.

He was riding one of the black vans that arrived in a row around 20 minutes before a 2:00 pm (0500 GMT) deadline, according to BTS's agency HYBE.

Hundreds of media personnel and BTS fans packed an intersection in front of the boot camp's main gate, where a sign reads "A cradle for top class combat soldiers".

"We have mixed feelings today because on one hand, it's normal that he does this enlistment because it's an obligation anyway for any Korean men," said Veronique, a 32-year-old fan from Indonesia.

"But on the other hand we cannot see him for a minimum of 18 months ... Happy but also sad but also proud," she said.

The location of Jin's boot camp close to the border with North Korea, with which the South remains technically at war, has sparked local media speculation that he is expected to be deployed to a "frontline unit" after training.

Fans were stunned in June when BTS revealed they were going on hiatus, citing exhaustion and pressure as well as the desire to pursue solo careers.

But analysts said the announcement was timed because of the compulsory military duty.

The group will reunite around 2025, when its seven members have completed their service.

"For a while, it's true that there were many fans who would spend days just crying," a South Korean fan, who runs the Twitter account @5heterotopia, told AFP.

South Korea exempts some elite athletes, such as Olympic medallists, and classical musicians from duty, but pop stars do not qualify.

However, BTS have already benefited from a 2020 revision to the conscription law that raised the enlistment deadline for some entertainers from age 28 to 30.

Jin, the oldest member of BTS, turned 30 on December 4.

They won't be forgotten

The seismic changes for BTS in 2022 have sparked feverish speculation among fans and K-pop watchers about what the future holds for the group -- will they retain their fame or struggle to revive that success?

Some male K-pop stars have struggled to resume their careers after military service in a cut-throat industry where artists are easily replaceable.

"For the K-pop industry, the retreat of BTS will be a big deal," Lee Taek-gwang, a communications professor at Kyung Hee University, told AFP.

However, other experts have pointed to the massive success of BTS and said they will be an exception to that trend.

They "obtained another level of popularity, influence and credibility", said Lee Ji-young, a BTS expert and professor at Hankuk University of Foreign Studies.

Since their debut in 2013, BTS have been widely credited with doing more than any diplomat or other celebrity to boost the image and soft power of South Korea, today considered a global cultural powerhouse.

They have been invited to speak at the United Nations, and to meet US President Joe Biden at the White House. They are also official ambassadors to bring the 2030 World Expo to Busan, South Korea.

The South Korean government has credited BTS with bringing billions of dollars into the economy.

BTS "changed a lot of perceptions of 'what is' a pop star today," Jeff Benjamin, Billboard's K-pop columnist, told AFP.

But despite that success, a draft proposal to grant them service exemptions proved too controversial and never made it through parliament.

"In South Korea, the military service is the indicator of egalitarianism... (where) all men are equal," Lee at Kyung Hee University told AFP, adding it was a "necessary" symbol of citizenship.

Jin will reportedly join a "frontline unit" stationed near the border.

"It shows the role of culture, and public opinion, in shaping international affairs. Is this 'frontline' role a combat role, or is it about public relations and media?" Sarah Keith, a senior lecturer in media and music at Macquarie University, told AFP.

On Monday, Jin posted a photo of himself with military-style cropped hair on the South Korean social media platform Weverse, with the caption: "It's cuter than I expected."