BTS' RM: From K-pop star to the patron of the arts

RM—whose real name is Kim Namjoon—is increasingly making a name for himself in another, more surprising role—that of patron of the arts 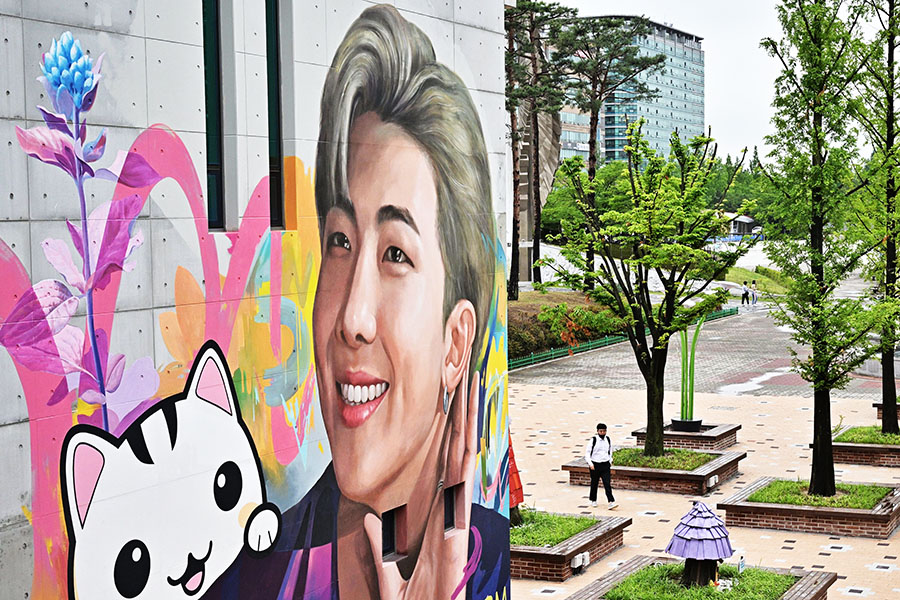 K-pop aficionados know RM mostly through the successful boy band, BTS. But the South Korean singer is increasingly making a name for himself in another, more surprising role—that of patron of the arts.

The slightest post by RM—whose real name is Kim Namjoon—causes a stir on social networks. The ones in which he presents the various works from his art collection are no exception. One such post focuses on "Untitled (But the boomerang that returns is not the same one I threw)", a sculpture by American multidisciplinary artist Roni Horn taking the form of a hefty-looking, translucent glass cylinder. The South Korean rapper reportedly acquired it from the Belgian gallery owner Xavier Hufkens for $1.2 million, according to ARTnews.

And that's not all. From the look of his Instagram account, RM appears to own pieces by KAWS, Ugo Rondinone, Joel Shapiro, as well as his compatriots Yun Hyong-Keun, Chang Ucchin and Lee Bae. An impressive collection for a 27-year-old art fan.

However, it isn't always easy for budding collectors to take their first steps in a world of codes and conventions like the art world. But it takes more than that to discourage Millennial collectors, like RM. These young people born between 1980 and 2000 invest more in art today than any other category of buyers. Their median spend was $378,000 in the first half of 2021, according to the Art Basel and UBS report. That's almost four times as much as baby boomers.

Some of these 20-to-40-year-olds have already opened private museums, like the Chinese collector, Michael Xufu Huang. For his part, RM has ambitions to open an art gallery, as he explained in an episode of Intersections: The Art Basel Podcast. This would be a calm, quiet place, possibly with a small café at street level.

Checking out the museums visited by your idol

Before this ambitious project potentially takes shape, the singer has been visiting museums, galleries and fairs in search of inspiration. He gives followers a glimpse of his visits to the Chinati Foundation, the Vitra Design Museum, the Kunstmuseum Basel, the Pompidou Center or the Musée d'Orsay in the vlog ("video blog") posts that the BTS band occasionally posts on its YouTube channel. RM sees it as a way to share his passion with the (very) numerous members of his "army" of fans.

And for those in the art world, this can be beneficial. The musician's interest in culture encourages his—primarily young—fans to venture into establishments they have long deserted. Once considered dull or reserved for an elite, museums are becoming a place to be for cool kids. This RM-related phenomenon has a name: "namjooning." It refers to the process of heightened fandom that pushes some of the star's followers to partake in the leisure activities of their idol. These include hiking, cycling and... visiting art exhibitions.

Some museums, such as the Busan Art Museum, have seen an increase in attendance after a visit from RM. "Whenever he drops by, we get more visitors and more attention on social media, getting comments from people saying they want to visit," a museum insider told the Korea JoongAng Daily. "We’re grateful that whenever RM visits, more people become more interested in art." As such, it seems that the future is bright for RM, even if the BTS band has now broken up.