India's power sector to attract $1 trillion in investments by 2030: Goyal

Power ministry is also working on a vision to turn India into an end-to-end manufacturing hub for solar panels, power minister says 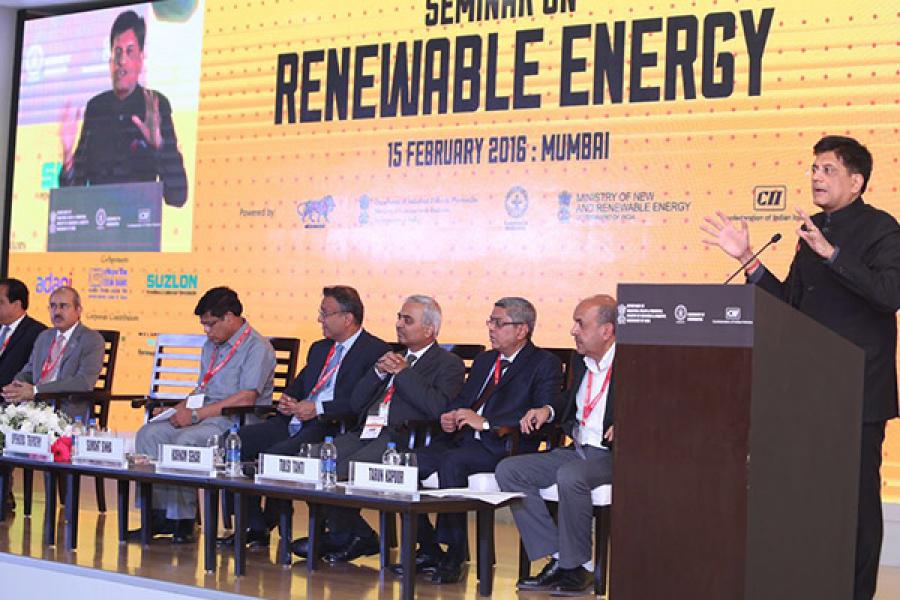 Image: Joshua Navalkar
Power minister Piyush Goyal was speaking at a conference on renewable energy, which was a part of the Make in India Week being held in Mumbai

The power sector is likely to attract around $1 trillion in investments by 2030 across segments such as coal-based and renewable power, power minister Piyush Goyal said on Monday.

Alongside striving to achieve a renewable power generation target of 175 GW (1 GW is equal to 1,000 MW), the power ministry is also working on a vision to turn India into an end-to-end manufacturing hub for solar panels, Goyal said.

Speaking at a conference on renewable energy, which was a part of the Make in India Week being held in Mumbai, Goyal said that India should have a solar panel-making capacity enough to cater to 10 GW of power over the next two to three years.

“The Make in India Week is the first step towards achieving this goal,” Goyal said. “I am confident that the solar panels that will be made in India will prove to be cheaper than those available in other countries, and this should happen over the next 18 months.”

Goyal said that he has spoken to the chief ministers of Chhattisgarh, Jharkhand and Odisha, where enough land, surplus power and coal reserves are available, which can be utilised by prospective manufacturers of solar panels setting up base in these states.

The power minister also said that India was on target to achieve the target of bidding out 18,000 MW of solar power generation capacity in the current fiscal. “Around 6,000 MW have been awarded and another 9,000 MW is on the verge of being awarded,” Goyal said.

India will also increase focus on developing hydropower and bi-fuel as alternate energy resource, Goyal said. “We are trying to see if India can do away with the import of petroleum products by being self-sufficient in this aspect with the help of bio-fuel,” Goyal said.

The power ministry is also sending a note to the cabinet mooting the development of 25 new solar parks in the country.

The power minister said that he was happy to see that the tariff for development of new solar power generation capacity had come down to around Rs4.34 per unit in a recent contract awarded out by NTPC, which would make it more attractive for power distribution firms that buy such power. Goyal said that by utilising economies of scale and new technology, tariff for solar power may fall further to Rs 4.

Tweets by @forbes_india
30 Under 30: Saket Modi - Hacking and securing the world wide web
Bollywood and the minority question