Over one million people need urgent food aid across the region after four consecutive rainy seasons have failed in the Horn of Africa, with a fifth also expected to fare poorly, causing the worst drought in 40 years and a major hunger crisis spanning Kenya, Somalia and Ethiopia 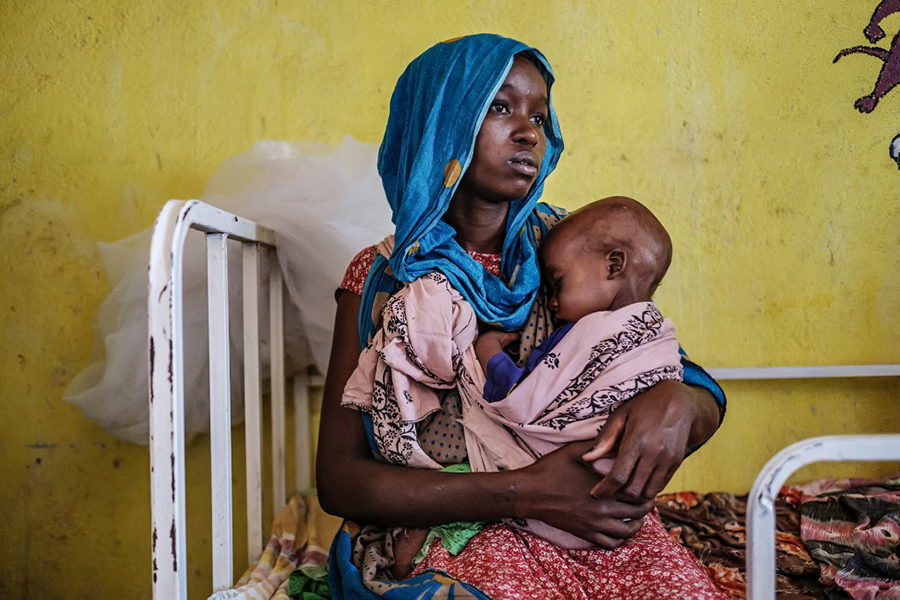 A woman holds a malnourished child at the nutrition unit of the Kelafo Health Center in the town of Kelafo, 120 kilometers from the city of Gode, Ethiopia, on April 7, 2022. The worst drought to hit the Horn of Africa for 40 years is pushing 20 million people towards starvation, according to the UN, destroying an age-old way of life and leaving many children suffering from severe malnutrition as it rips families apart. (Image: EDUARDO SOTERAS / AFP)

Addis Ababa, Ethiopia: Tens of thousands of children in Ethiopia are suffering from the "most deadly" form of malnutrition as a prolonged drought ravages the east and south of the country, British charity Save the Children said Thursday.
Four consecutive rainy seasons have failed in the Horn of Africa, with a fifth also expected to fare poorly, causing the worst drought in 40 years and a major hunger crisis spanning Kenya, Somalia and Ethiopia.
Over one million people need urgent food aid across the Ethiopian regions of Oromia, SNNP (Southern Nations, Nationalities and Peoples), Somali and South West, the charity said in a statement.
"About 185,000 children (are) now estimated to be suffering from the most deadly form of malnutrition," it said.
"Children—especially small children—are bearing the brunt of a harrowing and multifaceted crisis in Ethiopia," said Xavier Joubert, the charity's country director in Ethiopia.

"A prolonged, expanding, and debilitating drought is grinding away at their resilience, already worn down by a gruelling conflict and two years of the Covid-19 pandemic," he added.
In the Somali region—one of the worst affected—the malnutrition rate jumped 64 percent in the past year, according to Save the Children.
During the same period, more than 50,000 cases of severe acute malnutrition, which requires emergency treatment to prevent death, were recorded, the non-profit said.
Much of the region's pastoral nomadic community was on "the brink of starvation", it said, with families reporting "that many children are only being fed one meal per day."

The record drought has affected about 8.1 million people in Africa's second most populous nation, which has also been suffering the consequences of a 19-month conflict in the north.
About 30 million people or a quarter of Ethiopia's population need humanitarian assistance, Save the Children said.
Insufficient rainfall has destroyed crops, killed livestock and forced huge numbers of people to leave their homes in search of food and water across Kenya, Somalia and Ethiopia.
The dire conditions have been exacerbated by the conflict in Ukraine, which has contributed to soaring food and fuel costs.
Meanwhile, the humanitarian response is suffering from a lack of funds, with a February appeal by the UN's World Food Programme raising less than four percent of the cash needed.
East Africa endured a harrowing drought in 2017 but early humanitarian action averted a famine in Somalia.
When a famine struck the country in 2011, 260,000 people—half of them children under the age of six—died of hunger or hunger-related disorders.
Experts say extreme weather events are becoming more common and more intense due to climate change.
By Aymeric VINCENOT
© Agence France-Presse