Credit Suisse rescue hinges on overhaul of its investment arm

The main focus of the embattled bank's transformation plan is bound to be on the heavily risk-exposed investment banking division—which accounts for 40 percent of overall revenues—and has been haemorrhaging billions, amid speculation it could be pared back or split up 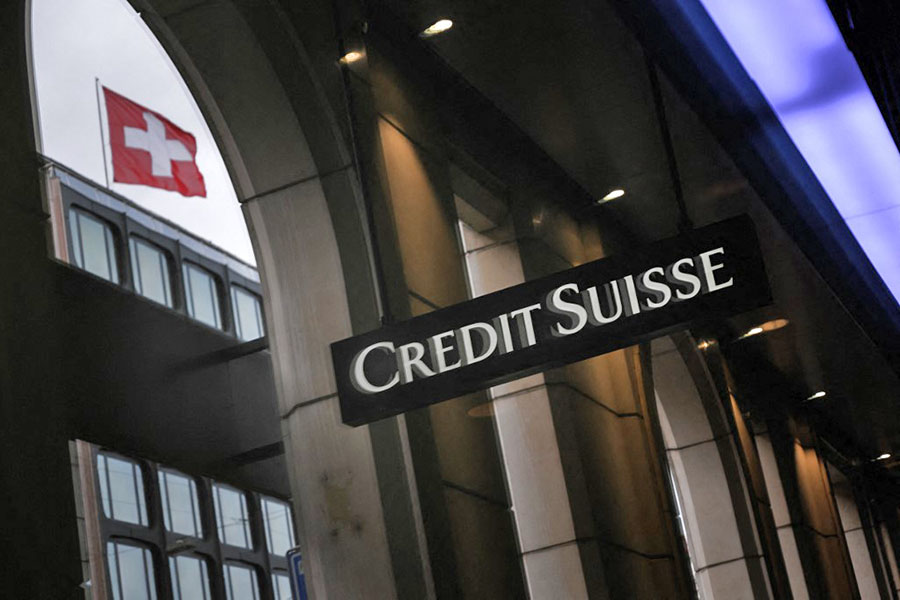 This photograph shows a sign of Switzerland's second largest bank Credit Suisse on a branch's building next to a Swiss flag in downtown Geneva. Image: Fabrice COFFRINI / AFP

Zurich, Switzerland: The soundness of Credit Suisse's "transformation plan", set to be unveiled next week, will be mainly judged on the plans it has in store for its ailing investment bank.
Ulrich Koerner, a restructuring specialist who took over as chief executive of embattled Credit Suisse in August, is due to present the widely anticipated strategic review on October 27.
Switzerland's second-biggest bank, which has been battered by repeated scandals, rumours of financial woes and plunging share prices, has not divulged its intentions.

But observers say the main focus is bound to be on the heavily risk-exposed investment banking division, which has been haemorrhaging billions, amid speculation it could be pared back or split up.
The investment bank "needs some significant restructuring", analysts with Jefferies wrote in a research note, warning that the division was expected "to remain loss-making to 2024".
The investment banking arm—which among other things provides advice around mergers and acquisitions, debt and equity offerings and initial public offerings—accounts for nearly 40 percent of Credit Suisse's overall revenues.

But last year, the division suffered a pre-tax loss of 3.7 billion Swiss francs ($3.7 billion).
That effectively erased the profits raked in by the wealth management, asset management and Swiss divisions combined and left Credit Suisse with a 1.6-billion-franc annual net loss.
The investment bank attributed that loss to the dramatic implosion of US fund Archegos, which cost Credit Suisse $5 billion, and to its subsequent decision to disengage from services to hedge funds, which had been at the heart of that scandal.
But the losses have continued since.
The division posted a 1.1-billion-franc loss for the second quarter of 2022 and saw its revenues shrink 40 percent, as the conflict in Ukraine and broader financial market turmoil saw debt and initial public offerings evaporate.
In response to the crisis, the bank has hinted it might shed its securitised products, which are securities constructed from pools of assets that are split up and sold to investors.
Credit Suisse had already strived to lighten its dependence on such products following the 2008 financial crisis, which was in large part brought on by the securitisation of subprime mortgages.
Also read: How Credit Suisse served strongmen and spies
Those mortgages—granted to borrowers often with poor credit histories or insufficient income—were packaged into what appeared to be low-risk financial products and sold to investors.

Credit Suisse this week finally settled its last remaining lawsuit in the United States over its role in the mortgage-backed securities debacle, dishing out $495 million to New Jersey authorities.
Analysts however caution that letting go of its securitised products could be a bad idea.
They are typically very profitable and helped limit the bank's plunging revenues last year.
Selling them off would deprive the bank of future revenues at a time when it needs to undertake a massive restructuring amid macroeconomic headwinds.
But rumours abound that potential buyers are already lining up.
Citing sources close to the matter, Bloomberg News reported that Mizuho Financial, Apollo Global Management Inc and Centerbridge Partners had voiced interest, as had Pimco and Sixth Street.
As a sign of the shakeup to come, it also reported that the head of the investment banking division, Christian Meissner, was preparing to move on.

The Ethos foundation, a shareholder group that represents pension funds, told AFP it had for years asked Credit Suisse for "a reduction or even a sale" of the investment bank, complaining it "guzzles capital".
"Its activities are more risky and have repeatedly caused significant financial losses," it said, insisting that Credit Suisse instead should focus on its wealth management and Swiss units.
But rumours have also recently surfaced suggesting that Credit Suisse might be looking to make cuts beyond the investment banking unit.
Last weekend, the Financial Times said sources close to the matter believed the bank's hunt for capital to help fund the looming restructuring might lead it to sell off assets within its Swiss division.
And last week, Spanish financial daily Cinco Dias reported the bank was preparing to poll its investors about their interest in holding onto Allfunds, the world's largest institutional fund distribution network.
By Nathalie OLOF-ORS
© Agence France-Presse

Tweets by @forbesindia
Most Salvadorans think making Bitcoin legal tender was 'failure'
Redressing the praise deficit: Women in leadership and leveraging your best self