The Swiss bank's stock price has shed 70 percent since the March 2021 collapse of British financial firm Greensill to which it was heavily exposed. With Switzerland's second-biggest bank refraining from revealing its intentions, speculations have been swirling 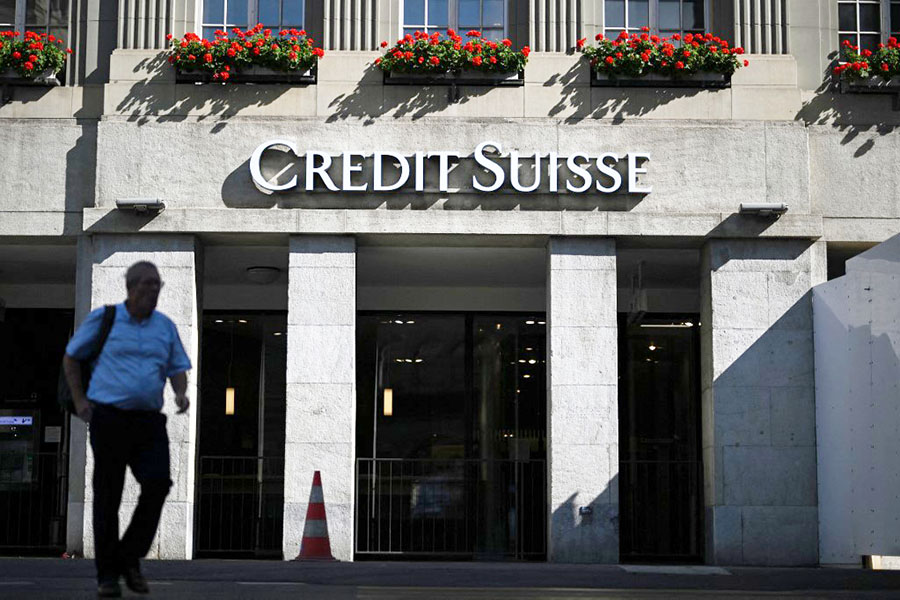 Zurich, Switzerland: Battered by a series of scandals, rumours of financial trouble and plunging shares, Credit Suisse is preparing "transformation plans" to restore confidence in the Swiss banking giant.
Ulrich Koerner, who took over as chief executive in August, is due to present the strategic review on October 27.
With Switzerland's second-biggest bank refraining from revealing its intentions, speculation about its incoming strategy has been swirling.

In a note to clients, Venditti estimates that amount needed at four billion Swiss francs ($4 billion).
Investors fear that such a move would dilute the value of bank shares.
Its stock price has shed 70 percent since the March 2021 collapse of British financial firm Greensill. Credit Suisse was heavily exposed to the group.
Carlo Lombardini, a lawyer and professor of banking law at the University of Lausanne, said a capital injection would leave a "bitter taste" for shareholders.
"But they probably don't have a choice," Lombardini told AFP.
The bank will have to raise funds from shareholders to finance layoffs and the cost of restructuring, he said.
Another option would be for the bank to sell assets.
"It's a tough choice," said David Benamou, investment director at Axiom Alternative Investments, noting that it would hurt the bank's future revenues. "Market conditions are tight and a seller who is forced to sell usually does not get a favourable price," Benamou said.
Analysts at Jefferies, a financial services firm, said "asset sales alone are unlikely to be the solution to the potential capital shortfall problem".
But, they added, it "could be a first step and buy time until shares recover and the outlook gets better, at which time a capital raise, if needed, would be a less dilutive and more acceptable option".

Is it a takeover target?

Credit Suisse shares have rebounded after sinking to a record low of 3.518 Swiss francs on Monday, showing that markets are giving it "a chance to put together a solid plan", said Ipek Ozkardeskaya, analyst at Swissquote bank.
With its market value melting by 10 billion Swiss francs earlier this week, Credit Suisse became "a very attractive target for banks that would like to buy a nice wealth management branch", said Benamou.
But Credit Suisse has the means to remain independent, he said, and any bid could face political resistance.
"I think the Swiss want Credit Suisse to remain Swiss," Benamou said.

Is it a 'Lehman moment'?

In addition to the $10 billion exposure to Greensill, the implosion of US fund Archegos cost Credit Suisse $5 billion.
On top of that, Credit Suisse was fined $475 million by US and British authorities in October over loans to state-owned companies in Mozambique.
Koerner, who took the reins in August with the mammoth task of revitalising the bank, sent an internal message to reassure staff last week, saying Credit Suisse had a "strong capital base and liquidity position".
But investors concerns reached fever pitch last weekend with rumours on social media that the bank may be on the brink of a "Lehman moment" — a reference to the US investment firm whose disintegration precipitated the 2008 global financial crisis.
This triggered Monday's stock plunge as well as an increase in the cost of buying insurance against Credit Suisse defaulting on its debt.
Analysts, however, have played down concerns that the Swiss bank could follow in the footsteps of Lehman Brothers, stressing that it was "too big to fail" and the government would not let it to collapse.
The Swiss government rescued Credit Suisse rival UBS in 2008 when it teamed up with the central bank to set up a fund that absorbed the group's toxic assets.
Benamou said a state intervention for Credit Suisse was unlikely as banks have been required to put aside enough cash to withstand a new crisis following the 2008 financial shock.
In an effort to reassure markets, Credit Suisse announced plans on Friday to buy back up to $3 billion of debt.

Tweets by @forbesindia
IT services Q2 earnings and beyond: expect growth, but at a slower pace
8 out of 10 global CEOs anticipate a recession: report