IT services Q2 earnings and beyond: expect growth, but at a slower pace

India's top four IT companies report their earnings this week. Analysts expect continued growth, but the pace will most likely be slower 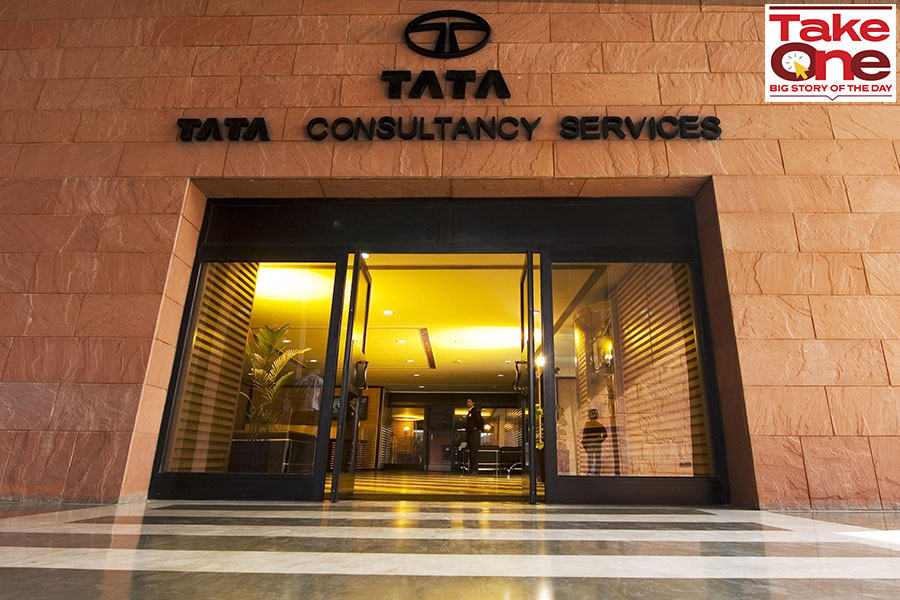 Tata Consultancy Services, India’s biggest IT services company, will be first off the block in reporting fiscal second-quarter earnings, when it reports its numbers after markets in Mumbai today.
While TCS offers no projections, the numbers and the top executives’ commentary should give an indication of the impact of the ongoing global economic slowdown. Analysts at brokerages in India expect growth to continue, as well as the high staff churn in the sector.

“The revenue growth of Indian IT companies is expected to continue in Q2,” research analysts Sameer Pardikar and Sujay Chavan write to clients in a note on October 4.

Concerns about the slowdown—and a possible slackening of the demand that had jumped because of the Covid pandemic—have already sent the shares of the top Indian IT companies lower by more than 25 percent this year, as part of a global tech-led selloff.

They expect Bengaluru’s Infosys, the second largest Indian IT company, to report the most growth among the top five leaders, at 3.5 percent quarter-on-quarter increase in revenues in dollar terms. The ICICI analysts expect TCS to report 1.5 percent sequential growth and 1.2 percent for HCL Technologies and 2.5 percent for Wipro.

At Kotak Securities, analysts Kawaljeet Saluja and Satishkumar S forecast sequential revenue growth of 2.5-5 percent in constant currency for the large companies and 3.5-5.5 percent for mid-tier companies.
“Growth will be led by strong spending on digital competencies by clients and the translation of total contract value into revenues,” the analysts write in a report to clients dated September 29.

They also expect Infosys to grow the most, among the top companies, with an estimate of 4.7 percent, followed by TCS (3.1 percent), HCL Tech (2.9 percent) and Wipro (4 percent overall, 2.7 percent excluding acquisitions).

In comparison, Infosys reported revenue growth of 5.5 percent sequential growth for the April to June period this year, and 6.3 percent for Q2 of the previous fiscal year. At TCS the corresponding increases were 1.25 percent and 2.9 percent, respectively.

Among mid-tier companies, the Kotak analysts expect Mindtree to lead the way with 5.5 percent sequential growth, followed by Larsen & Toubro Technology Services at 4.4 percent, LTI at 3.9 percent and Mphasis at 2.4 percent.

The outsourcing business at Accenture, the world’s biggest professional services and consulting company, is often seen as a proxy by analysts for how demand is shaping up for companies like TCS and Infosys. 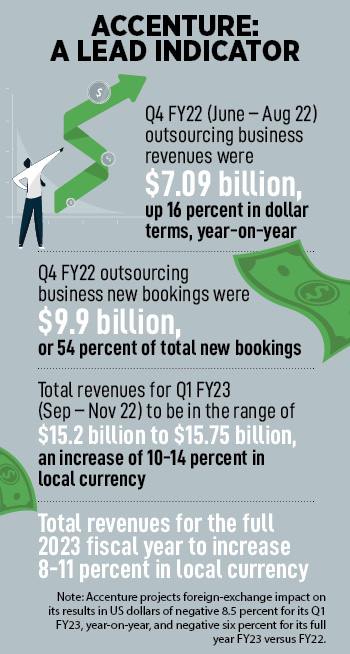 Accenture’s outsourcing business, which was 46 percent of its revenues in its fiscal fourth quarter that ended August 31, rose 16 percent year-on-year in dollar terms, and 23 percent in local currency, according to the company’s press release on September 22.

Outsourcing orders for Accenture’s August quarter were nearly at $10 billion, a 41 percent increase. For the 12 months ended August, orders were almost at $34 billion, up 18 percent over the previous fiscal year.

In other words, growth, but slower growth, ahead is the most likely scenario across the IT services industry. Accenture’s forecast also factors in a negative six percent foreign exchange impact on its US dollar numbers in its current fiscal year.

Before the global economic slowdown took hold and money became costlier as central bankers around the world raised interest rates to tame inflation, the thesis was that the accelerated shift to the cloud and resultant increase in demand for tech services is irreversible.

That is largely true, but the rate at which businesses around the world will move to the cloud is likely to be slower than earlier expectations. 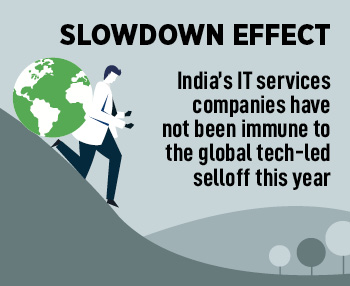 About 67 percent of 1,000 senior technology leaders at US companies across industries said they have yet to see a significant return on cloud investments, global accounting firm KPMG note in its latest annual technology survey, released last month, The Wall Street Journal reported on September 29.

“Many first movers expected significant IT cost efficiency from their cloud investments,” said Barry Brunsman, a principal in KPMG’s CIO Advisory group, according to The Wall Street Journal. “We have seen a shift away from that expectation in favour of speed and agility.”

Overall, the KPMG survey polled 2,200 executives in the April-June period this year, and the results were complemented by a set of interviews with seven technology experts, the firm says in its report on its website.

Among the top reasons for lower returns on cloud investments than anticipated are insufficient talent (37 percent of respondents), security and compliance requirements (34 percent), business / IT / stakeholder misalignment on outcomes (31 percent) and cultural resistance (30 percent).

Worldwide, cloud spending is projected to reach $830.5 billion by the end of the year, up 17.5 percent from 2021, but slowing from last year’s growth rate of 18.3 percent, according to International Data Corp, the Journal reports. IDC expects growth to drop to 16.3 percent next year.

Heading into next year and beyond, a downgrade by Goldman Sachs offers an indication of expectations. Analysts at the global investment bank downgraded TCS and Infosys from ‘buy’ to ‘sell’ citing a likely slowdown in their dollar revenue growth, News 18 reported on Sep. 14. 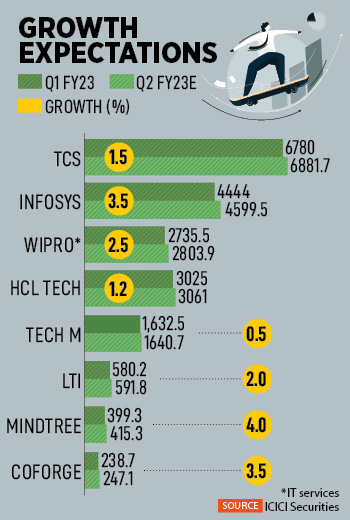 “The Indian IT sector benefitted from three secular tailwinds during the pandemic: outsourcing, offshoring and digitalization on the back of accelerated cloud migration,” the Goldman analysts wrote in a report to clients, seen by News 18.

“Given the upcoming macro slowdown (not recession) our macro team expects, which is percolating down multiple leading demand indicators, we believe Indian IT sector USD revenue growth will start to materially slow down from here, weighing on the secular tailwinds highlighted above,” they wrote.

The analysts cut US dollar-terms revenue growth forecast for the top 5 companies for the fiscal year ending March 31, 2024, by four percentage points to six percent year on year, from their earlier projection of 10 percent.

The analysts upgraded Wipro from ‘sell’ to ‘buy’ on attractive valuations and a recent pickup in its order book.

For example, in August, Wipro said it won a multi-year contract to deliver service integration and management services to HM Treasury, the UK government’s economic and finance ministry. Wipro will report its Q2 earnings on October 12.

Among India’s top IT companies, one data point of interest will be Infosys’s forecast for its full fiscal year. Most analysts are expecting the company to maintain the 14-16 percent projection the company made in July. Infosys will report its second quarter results on October 13.

HCL Technologies, which will also report its Q2 earnings on October 12, currently estimates a 12-14 percent increase in revenue for the year ending March 31, 2023.

Across the companies, margins will remain under pressure due to the high staff churn and increased costs from back-to-office initiatives and more travel, according to the analysts.

Infosys currently has an operating margin projection of 21-23 percent for this fiscal year. At HCL Tech, margin are expected to be 18-20 percent. Saluja and Satishkumar at Kotak add: “Both companies will have to stretch to achieve the lower end of their margin guidance band.”