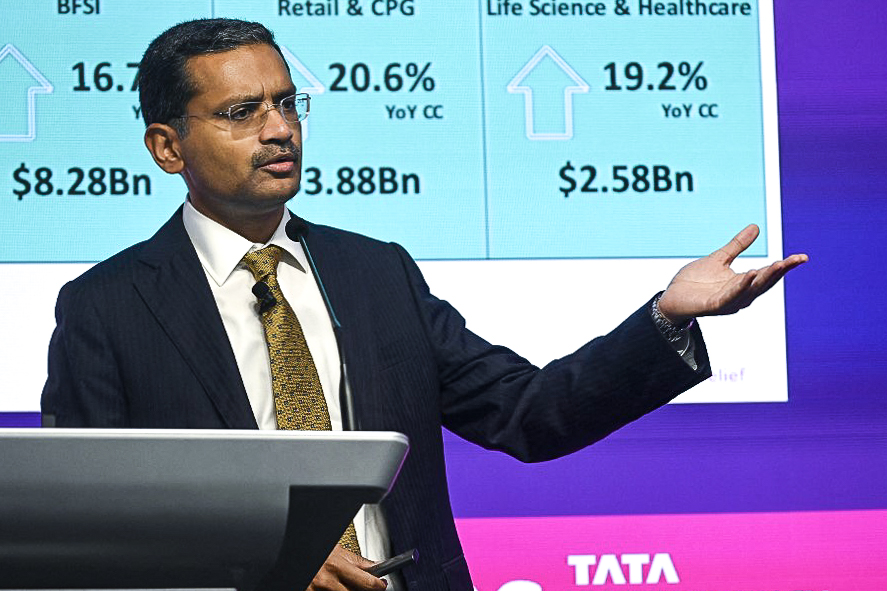 Tata Consultancy Services (TCS) reported the highest incremental revenue in the company’s history, announcing its latest earnings results on April 11. Chief executive Rajesh Gopinathan hinted that strong double-digit growth was all but a given for the current year—TCS offers no specific projections—but also warned that the ongoing staff churn in the industry will get worse before it gets better.

In a volatile market amid several macro concerns, TCS shares were little changed at close of Mumbai trading on Tuesday.

“Overall the demand environment continues to be very strong,” Gopinathan told reporters in Mumbai on April 11, in the company’s first in-person earnings press conference in two years. “There is a very strong market acceptance, our services are resonating very strongly with the market and the investments we have done are coming through very strongly.”

TCS and other large IT services providers are benefitting from clients prioritising their tech budgets, after the Covid-19 pandemic. Its sales was led by demand in America, the company’s biggest market, and a return to growth among retailers, one of the most affected segment during the worst of the pandemic, and consumer packaged goods businesses. 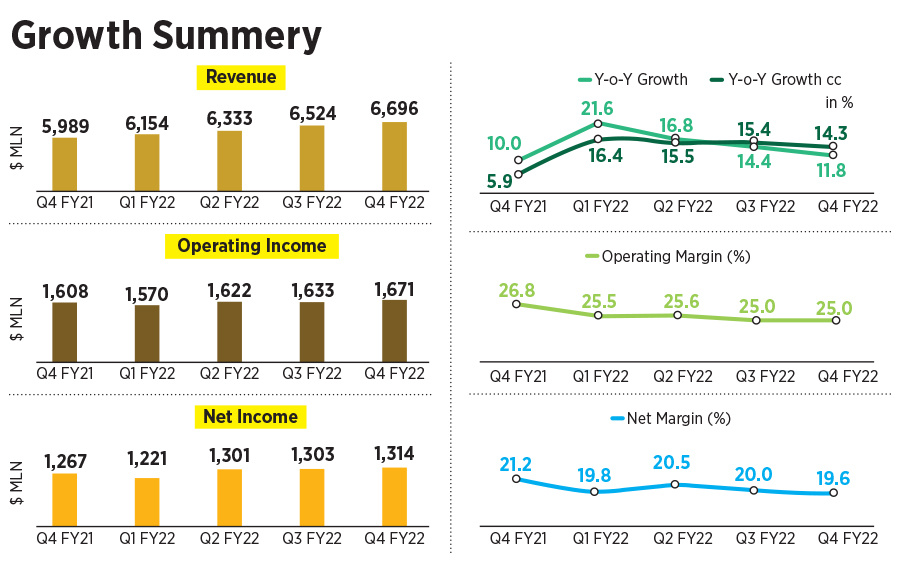 TCS, India’s largest software services provider, ended the fiscal year with an order book of almost $35 billion, including the biggest total contract value (TCV) accumulated in any one quarter, at $11.3 billion in Q4. The company won two very large orders in Q4, which were worth almost a billion dollars each, over the life of the contract.

Those two contracts added up to $1.8 billion, contributing to the record contract value achieved, but even excluding those deals, TCV for Q4 was the highest quarterly figure, at $9.5 billion, Gopinathan said.

With this growth TCS may even have bested larger rival Accenture, especially on the IT outsourcing front, analysts at HDFC Securities say. “While revenue and margin for Q4FY22 came in-line, key positives for TCS include market share gains compared to Accenture outsourcing,” wrote Apurva Prasad, vice president of institutional research, and his fellow research analysts Amit Chandra and Vinesh Vala, to clients in a note on April 12, analysing TCS’s results and management commentary.

TCS’s book-to-bill ratio of 1.35x compares with Accenture’s 1.2x on a trailing 12-months basis, the analysts noted. This ratio—of orders received versus orders fulfilled and billed for a certain period—is often closely watched by tech industry analysts as an indicator of demand outlook. A value higher than one implies more orders were received than filled, indicating strong demand, while a ratio below one implies weaker demand. 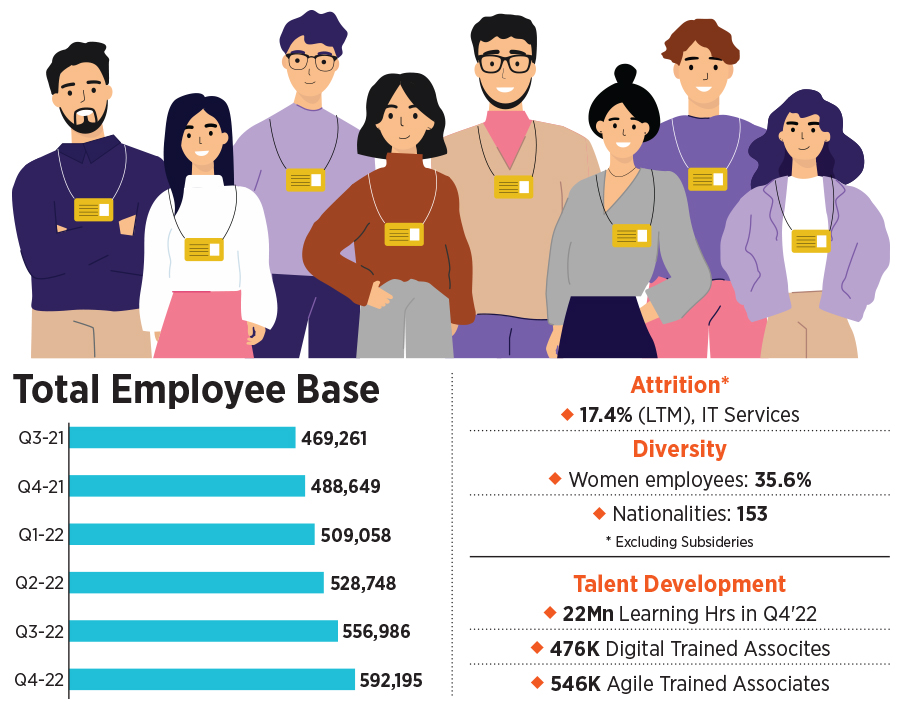 On March 17, Accenture, the world’s largest consultancy and software services provider, reported its fiscal Q2 revenues at $15 billion, an increase of 24 percent in US dollars—and 28 percent in local currency—for the three months through February, compared with the same period a year ago. The company follows a September-August fiscal year.

Accenture’s strong performance has been especially on the back of its depth of consulting-led tech services, which grew at 29 percent in its fiscal Q2, while the more traditional IT outsourcing services rose 19 percent.

In recent times, TCS has brought “calibrated focus” to building its own upstream consulting capabilities, with organisational structure changes to improve client mining, which is a medium-term driver of growth, the analysts said. And deals in the financial services sector, TCS’s biggest revenue earner, reflect bookings of $3.2 billion, including contracts from Sun Life Financial and Payments Canada, the analysts wrote.

The demand buoyancy is also reflected in TCS’s net headcount addition of more than 35,000 recruits in Q4 alone, a quarterly record, they say. “We believe the good show continues. We are highly impressed with the revenue growth and strong deal wins,” wrote Sumit Pokharna, vice president, fundamental research, at Mumbai’s Kotak Securities, in an email to Forbes India. 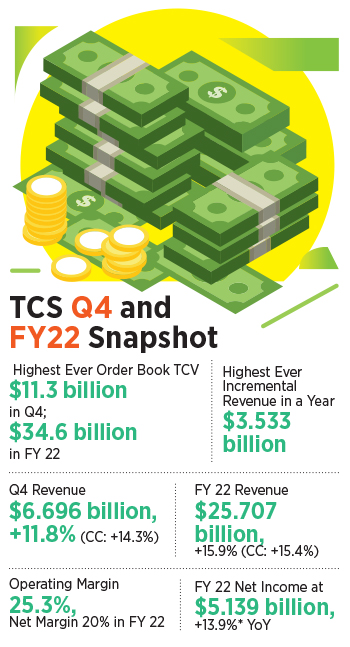 TCS also held a conference call on April 11 for investors and analysts. The company is confident of robust growth in Europe as well in the current fiscal year, Pokharna wrote. And the overall takeaway on the company’s customers is that the willingness to spend on technology continues to be strong. And “notably, TCS is managing the supply side extremely well and is better geared to defend margins,” Pokharna added.

At the end of Q4 FY22, amid an intensifying war for talent, TCS saw attrition, or staff churn, increase by about 210 basis points from the previous quarter to 17.4 percent on a leading 12-months basis. And this will get worse in the short term Gopinathan warned.

The reported number of 17.4 percent attrition “will get worse over the next couple of quarters, just because of the way LTM [leading 12 months] attrition is calculated,” he said. “But what we're seeing is that on a month-on-month basis, we’re starting to see it flattening.” Therefore, in absolute terms, the company’s attrition still went up in Q4 versus Q3, but in percentage terms, it has actually started to flatten and “we think that that trend will continue into the next quarter,” he said. “So we'll have to wait and see, it’s early days yet, but the curve is definitely flattening.”

Infosys, India’s second biggest software services provider, is expected to report its Q4 FY22 earnings on April 13 after markets. Analysts expect Infosys to report a 2.6 percent increase in March quarter sales over the previous three months. Infosys, the only Indian IT company to provide a full-year forecast, will likely project revenue growth of 11-13 percent for the current fiscal year, according to Kotak Securities.

Over the last two weeks, Infosys’s shares have lost about 9 percent, at close of Mumbai trading on April 12, as investors fret over its much higher attrition numbers, in comparison with TCS.

In general, the market is currently volatile, Pokharna pointed out. Investors expect Infosys to post flat-to-negative Ebit (earnings before interest and tax) margin due to higher attrition, lower utilisation and rising travel expenses, he said. Utilisation refers to the proportion of overall staff working on billable projects. 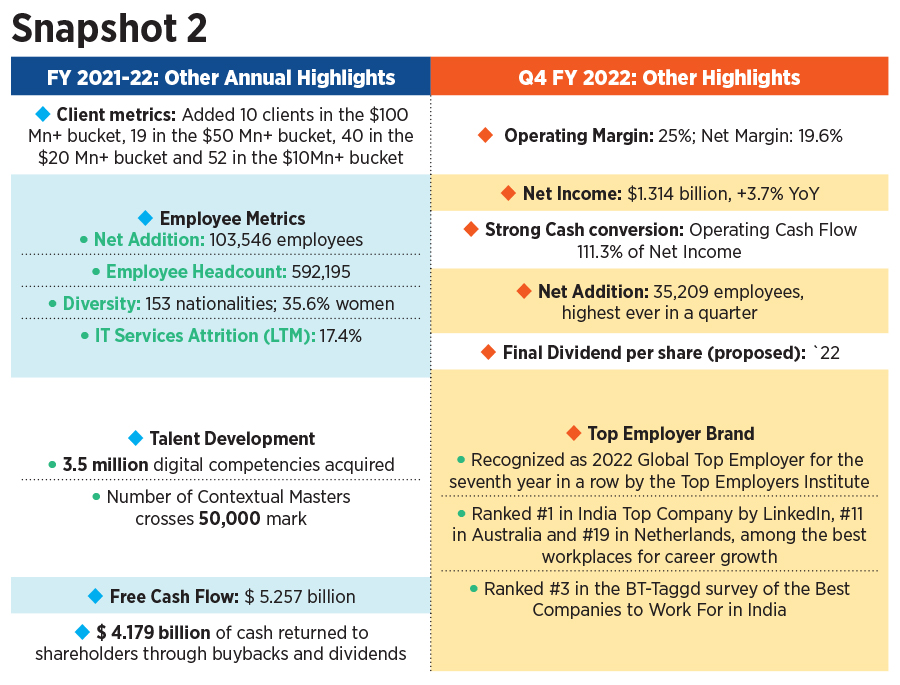 On the operational front, Infosys, too, has struggled with high attrition as the voluntary attrition rate skyrocketed to 25.5 percent in the December 2021 quarter. The “recent correction in the stock means lower expectation from results, and weak players have exited the stock, which is really good for the stock, going ahead,” he said.

Meanwhile, Wipro is doubling down on its acquisition strategy, as CEO Thierry Delaporte is attempting to drag the Bengaluru company back to growth that can be compared favourably with larger rivals Infosys and TCS.

Wipro on April 11 announced that it has acquired Convergence Acceleration Solutions (CAS Group), a US-based consulting and programme management company that specialises in large-scale business and technology transformation for the world’s biggest communications service providers.

Delaporte has been acquiring companies to consolidate and deepen Wipro’s ability to deliver large-scale transformation projects for clients in multiple verticals. A year ago, Wipro acquired Capco, a fintech consultancy for $1.45 billion in its largest acquisition.

Wipro didn’t provide financial details of the CAS Group purchase, which is smaller, and which brings about 138 consultants into the company’s fold. The company is slated to announce its Q4 results on April 29.

Back at TCS, in response to a question from a reporter on growth projections, Gopinathan declined to offer any specifics, but added: “We have done more than 15 percent this year, so double-digits… that’s hardly an aspirational target.” He’d also said earlier in the same conference with reporters that “the momentum is strong and we are quite positive as we look forward into the coming year”.

Tweets by @forbesindia
Indian companies storm the metaverse and NFT space
From Google's Sapna Chadha to Twitter's Kanika Mittal, women in leadership on how to #OwnIt and #BreakTheBias