IT services: Expect strong growth and a brutal talent war ahead 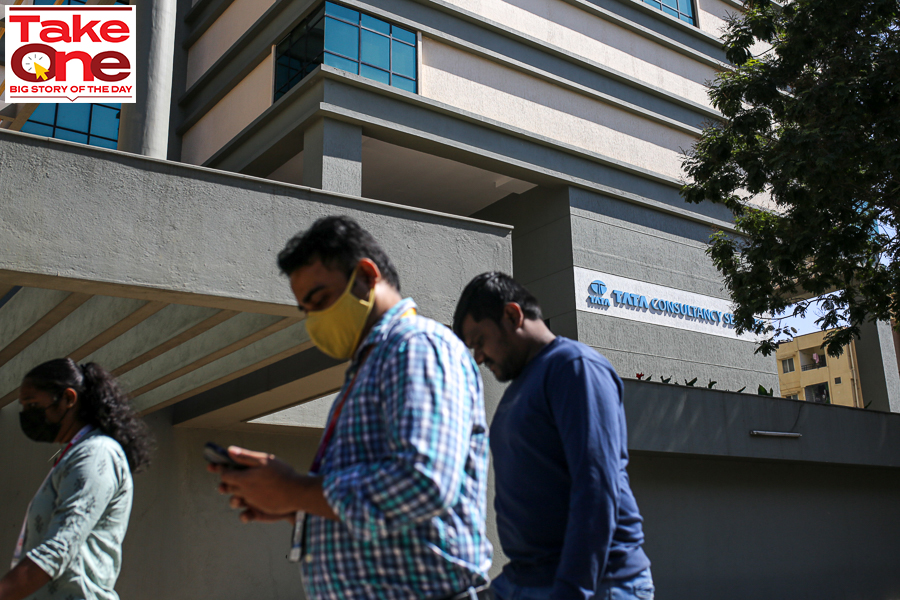 India’s top IT services companies head into another earnings season starting next week, with Tata Consultancy Services, the biggest of them, set to go first on April 11, with its fiscal fourth-quarter and full-year results. Second-ranked Infosys will release its numbers on April 13.

Industry lobby Nasscom estimates that the sector’s growth for the year ended March 31, 2022, will be the highest in more than a decade. And the strong numbers and aggressive forecast from Accenture, the world’s biggest consultancy and software services provider, last month, has heightened expectations that the top Indian competitors too will do well in the year ahead.

TCS, Infosys, HCL Technologies, and Wipro lead the $227 billion Indian IT sector, which is expected to continue to benefit as more companies in the world’s biggest economies look to move a greater share of their information technology workloads to the cloud, and adopt digital transformation projects.

As the rest of this year unfolds, “we expect the demand outlook to remain strong in FY23,” wrote Mukul Garg and Raj Prakash Bhanushali, research analysts at Mumbai brokerage Motilal Oswal, in a recent note to clients. “Companies will continue to post strong growth numbers on the back of tailwinds for the industry on account of digital and cloud transformation initiatives with enterprise clients.”

A combination of macro factors, including the fallout of the war in Ukraine, rising inflation in the US, which is the world’s biggest tech market, and the growing sense of urgency over climate change are headwinds. They may also, however, force the world’s biggest corporations to further step up the adoption of technology in pursuit of cyber security, and more sustainable operations, while keeping costs in check.

And as we learn to live with Covid-19, and businesses in the rich countries start to bring staff back to offices, and more travel gets sanctioned, technology that supports cyber-secure, hybrid workplaces and enables better collaboration will also see greater adoption. 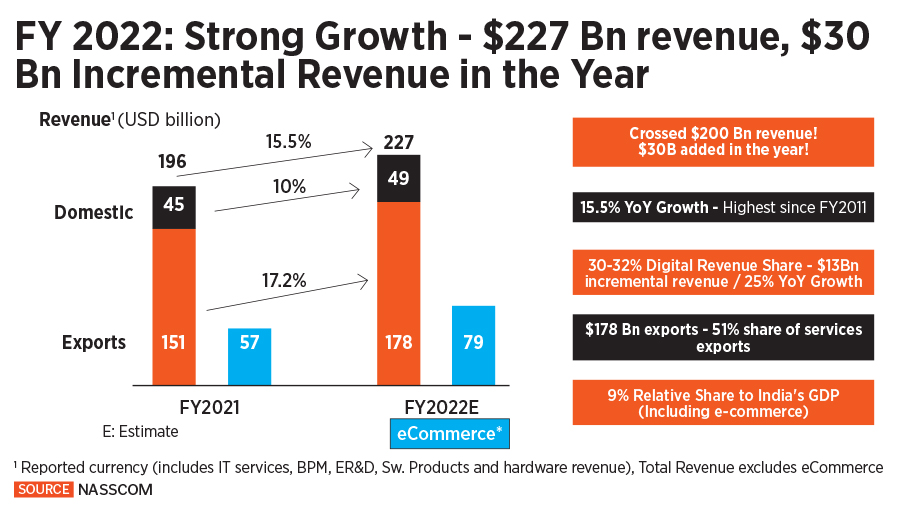 All this means that in addition to maintaining essential IT systems, businesses will also find the budgets for so-called ‘discretionary’ spends, to implement software that will directly or indirectly add to the top-line—opening up a better sales channel informed by artificial intelligence (AI), for example, or making customer experience more autonomous.

Garg and Bhanushali expect tier 1 Indian IT companies (the top four or five by revenue) to report revenue increases of between 2.8 percent and 5.1 percent for the three months ended March 31, 2022, over the previous three months, in constant currency. Q4 sequential revenues will increase in the range of 2.5 percent to 8 percent for tier 2 companies—such as LTI, Mindtree and Mphasis—the analysts estimate. Overall, “continued strong commentary and upward revision in guidance from Accenture suggests strength in the demand momentum,” they note.

Industry experts see Accenture’s fiscal second-quarter results as evidence that for those providers with the right combination of extensive business domain knowledge and deep technology know-how, there is the opportunity to claim market share and grow significantly faster than the overall IT services sector.

“It’s hard to overstate how impressive Accenture’s performance has been. Their growth of both revenue and earnings has led the industry, and this is doubly impressive given their size,” says Peter Bendor-Samuel, founder and CEO of Everest Group, a consultancy that advices enterprises on their IT strategy, in an email to Forbes India.

Accenture, the world’s largest consultancy and software services provider, reported fiscal Q2 revenues of $15 billion, an increase of 24 percent in US dollars—and 28 percent in local currency—for the three months through February, compared with the same period a year ago. The company follows a September-August fiscal year. This performance is broad-based and in every segment of the market the company competes in, says Bendor-Samuel.

“Our outstanding second-quarter financial performance demonstrates continued strong, broad-based demand across all our markets, services and industries,” said Accenture Chair and CEO Julie Sweet in a press release on March 17. “We continue to take significant market share as clients increasingly turn to Accenture as the partner uniquely positioned to help them navigate today’s accelerating pace of change.”

“The company is set to add $10 billion in organic revenue, a staggering figure,” says Sumit Pokharna, vice president, Fundamental Research at Kotak Securities, in Mumbai, in an email to Forbes India. Pokharna is referring to the remaining two quarters in the current fiscal year for Accenture, and by ‘organic’ he means excluding revenues from acquisitions.

Bendor-Samuel adds: “It is clear that they are growing faster than their competitors and taking share against the industry at large, as well as formidable Indian firms.”

Kotak’s Pokharna feels that “Accenture’s strong guidance indicates that spending on change programmes continues to be robust,” even as large businesses in the US and Europe begin to get staff back to offices and return to some of the pre-Covid ways. By ‘change programmes’ Pokharna means software projects aimed more at increasing revenue directly or indirectly, with digital technologies including AI, machine learning, and internet-of-things applications, as against backend IT outsourcing projects.

And this is a positive for Indian IT as well, he says, especially for companies like Infosys, which has a greater proportion of its revenues exposed to these change programmes, which are seen as discretionary in nature when it comes to the IT companies’ customers budgeting for such solutions.
The appetite for discretionary projects will also benefit mid-tier Indian IT companies, Pokharna says. This could mean companies like LTI, Mindtree, Persistent Systems and Mphasis.

Among the top-tier Indian IT companies, Infosys, which is seen as the most ‘Accenture-like’, reported in January that its revenues grew 21.5 percent in constant currency for its fiscal third quarter that ended December 31, 2021—the fastest among its peers. Infosys also boosted its full-year forecast for the third time, to between 19.5 percent and 20 percent in US dollar terms, in the latest instance.

Note that Accenture’s local currency-based projection isn’t comparable with this, and Accenture doesn't provide US dollars-based projections. What is apparent, however, is that these companies are bringing forth a combination of business knowledge and tech know-how that is helping them grow faster than rivals.

What is common to all IT companies is that the market is one of the strongest that they have ever seen, as the world recovers from Covid-19 and moves to fully embrace digital transformation. Against that backdrop, Accenture, with nearly 700,000 employees, has “the deepest bench of talent,” Bendor-Samuel says.

That helps the company capture the largest share of the digital transformation market. And it has an aggressive acquisition strategy that helps it capture a vital share of the highly technical workforce needed to offer ever more sophisticated software services. Finally, "their execution has been flawless in all their businesses,” Bendor-Samuel says.

One other important factor sets Accenture apart. It has a very strong consulting-led approach, compared with any other competitor. In fact, the company breaks out revenues from consulting services and outsourcing services. The former is growing much faster—29 percent in its fiscal Q2—than the latter, which rose 19 percent.

Growth amid a talent war

Nasscom projects India’s IT sector ended the year to March 31 with $227 billion in revenues, a 15.8 percent increase over the previous fiscal year. This is the highest rate of growth since FY2011, according to Nasscom. Of the total, Nasscom estimates exports rose 17.9 percent to $178 billion, from $151 billion for the previous year. 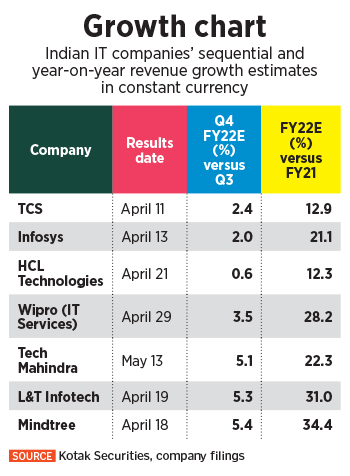 Among the top five companies, analysts expect Tech Mahindra, the smallest, to report the fastest growth for the January-March quarter—5.3 percent quarter-on-quarter—on the back of the multiple acquisitions made by the company. Wipro is expected to post the next-highest sequential growth, at 3.5 percent, which is within the company’s own forecast of 2 to 4 percent.

Infosys, which is the only top-tier Indian IT company to provide a forecast for the full year ahead, is expected to project a conservative 11 to 13 percent increase in revenue for the current fiscal year that ends March 31, 2023.

One of biggest concerns flagged by analysts tracking the Indian IT companies is staff churn and the ongoing talent war, as everyone fights to attract the same set of software engineers—foreign companies with large software centres in India, well-funded Indian startups, and even a new generation of tech startups from Silicon Valley to Sydney, which are setting up and expanding development centres in Bengaluru, Hyderabad, Pune and Chennai.

Then there is also the challenge of continuously growing and acquiring specialist talent. For this the Indian companies have also stepped up their acquisitions. For example, Infosys said on March 22 that it was acquiring Oddity, a Germany-based digital marketing, experience, and commerce agency.

The move strengthens Infosys’ creative, branding and experience design capabilities, adding more than 300 digital experts located in Stuttgart, Berlin, Cologne, Belgrade, Shanghai and Taipei, according to a press release. Oddity, one of the largest independent digital agencies from Germany, will become part of, and complement the capabilities of, Wongdoody, a creative and consumer insights company that Infosys acquired in 2018.

When Tech Mahindra announced it was purchasing Com Tec Co in Europe for €310 million ($341 million) in January, it was the company’s eighth acquisition in 10 months, according to Business Insider. Analysts expect Tech Mahindra’s acquisitions to have contributed about half of its sequential growth in Q4 of FY22.

About a year ago, Wipro concluded one of its biggest acquisitions, spending $1.5 billion to acquire financial tech consultancy Capco. Going forward, expect even TCS—it is traditionally widely seen as being the most conservative when it comes to large acquisitions—to be more aggressive than it has been in the past.

Large contract wins are always an area of focus. TCS and Infosys alone are expected to report new contract wins during Q4 of FY22 of more than $10 billion collectively, analysts at Kotak estimate. TCS’s share could be over $8 billion and Infosys, which publicly reports only deals worth $50 million or higher, is likely to have won $2.5-3 billion in such contracts.

The year ahead is also likely to be one in which demand for environment, sustainability and governance (ESG)-related technology solutions will pick up significantly. Accenture has taken the lead here, with CEO Sweet’s pithy mantra that “sustainability is the new digital”, which she probably first mentioned in January last year. Infosys is also building a dedicated ESG practice.

Tweets by @forbesindia
Photo Of The Day: Summer treat
Seeing a lot of new money coming into the market: GroupM's APAC CEO