Rupee depreciation likely to hurt, September quarter earnings growth momentum may slow down with a few exceptions led by select sectors like consumer and auto 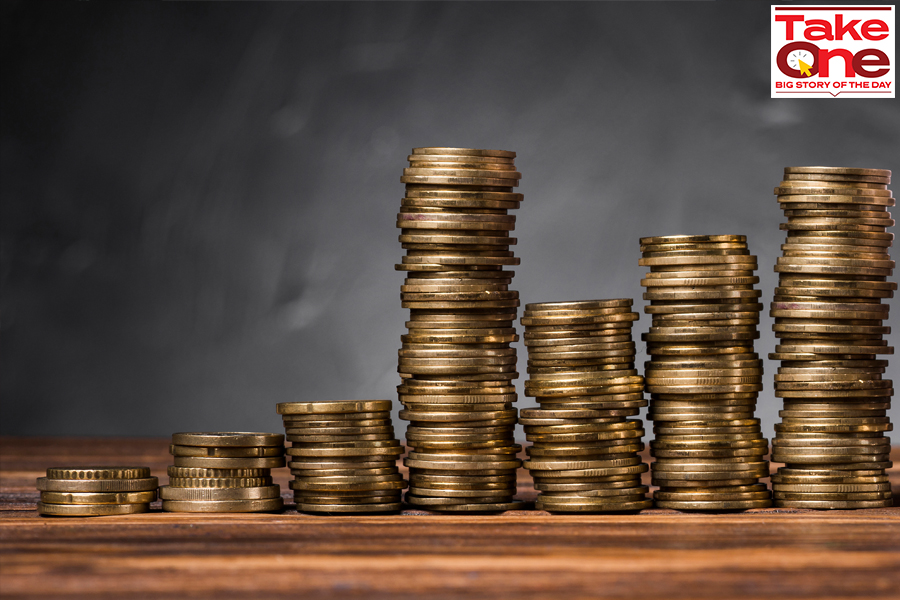 Indian rupee has been on a steady decline this year. The local currency hit a record low of 82.22 against the dollar on Friday.

With companies wriggling through a volatile patch, the three months ending September were a litmus test of corporate resilience. Factors like fears of a global recession, inflation, tightening of global monetary policy rates, currency fluctuations and geopolitical crisis threatened to dent the balance sheets of Indian companies in the second quarter of financial year 2023. However, there were a few bright sparks in the period. According to analysts, September quarter earnings growth momentum is likely to slow down, with a few exceptions led by select sectors like consumer and auto. Profitability of companies is expected to be dragged by lower realisation and margin pressure in global commodity driven companies in the metal and oil & gas (O&G) sectors.

Gautam Duggad, head of research, institutional equities, Motilal Oswal Financial Services, expects Nifty earnings to remain flat year-on-year in the July-September period. However, excluding metals and oil & gas, he sees Nifty earnings to see a 30 percent (YoY) growth in the second quarter of FY2023. “Earnings will be led by banking, financial services and insurance (BFSI), consumer and auto while dragged heavily by commodities like metals and oil & gas. Margins are expected to decline 310 basis points (YoY) for our universe excluding oil marketing companies (OMCs). Cement, healthcare, metals and IT will post margin decline while auto will report margin expansion,” he said.

He has reduced FY23 Nifty earnings per share (EPS) estimate by 3 percent driven by cuts in metals and O&G earnings, expecting the Nifty EPS to grow 11 percent and 21 percent in FY23 and FY24, respectively. Duggad believes that the Nifty is expected to post 10 percent earnings growth and 17 percent compounded annual growth rate (CAGR) in the first half of FY23 over the first half of FY20-FY23.

However, the consensus of analysts on Bloomberg still shows an optimism. According to analysts’ estimates on Bloomberg, Nifty one-year forward EPS grew 4.39 percent in FY23 in the last six months. However, analysts feel that there could be an earnings downgrade if the September quarter fails to deliver.

“The upcoming festive season will be a litmus test for the demand recovery expected by the companies. Any disappointment in this regard may lead to some earnings downgrades,” said Kunal Vora, head of India Equity Research, BNP Paribas. 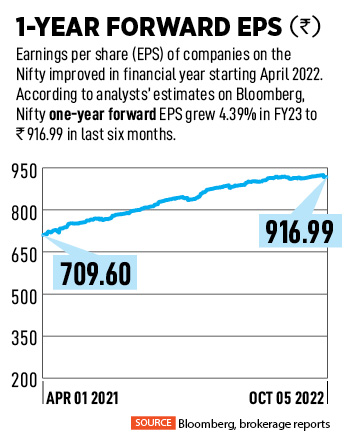 According to Vora, commodity prices have corrected from their recent highs of June 2022, which is largely expected to aid the sequential margin expansion from second half of FY23 onwards. However, the sharp depreciation in Indian rupee could partially offset the benefits from the decline in commodity prices.

Indian rupee has been on a steady decline this year. The local currency hit a record low of 82.22 against the dollar on Friday. The Indian currency depreciated 2.3 percent in September even as forex reserves have declined $96 billion in this year so far. The US Federal Reserve raised interest rates by 75 basis points driving a broader risk-off in the global equity markets with the dollar index rising 17 percent in 2022.

Analysts remain watchful as there has been a moderation in rural demand and down-trading in certain categories of products. Over the last few quarters, there has been a clear divergence in growth with categories consumed by the affluent and urban consumers outpacing the growth seen in the mass and rural consumption heavy categories.

“This is a trend seen across consumption categories such as private vehicle sales growing ahead of two-wheeler and jewellery, quick service restaurants, paints growing ahead of FMCG. The rural wage growth, at mid-single digit over the last few quarters has lagged the food and commodity inflation. However, we are seeing some green shoots now with the easing of commodity prices, higher food/fertiliser subsidy by the government and normal monsoon. We expect the rural demand to recover starting second half of FY23,” Vora said.

Raw material inflation may continue to impact gross margins for most companies due to the consumption of high cost inventory even as lower spot prices are likely to benefit next quarter onward. Analysts see steady and higher investments in advertisements and promotion spends ahead of the festive season quarter.

Companies in the consumer sector are likely to post price-led revenue growth due to the inflationary environment but timid rural demand.  Q1FY23 saw the adverse impact of sharply higher commodity costs flowing into the profit and loss (P&L) of companies after their low-cost inventory was exhausted in Q4FY22. The management guidance for most companies suggests that gross margin pressures are likely to continue in Q2FY23, but only the second half of FY23 is expected to see some improvement in margins.

However, food inflation continues to remain a matter of concern as lower prices are still not reflecting in the consumption cost basket. Production challenges, shortfalls caused by the heatwave and erratic monsoon seem to have caused further food inflation.

Deepak Jasani, retail research head at HDFC Securities feels that Q2FY23 corporate earnings could bring in a moderate rise in the topline year-on-year and quarter-on-quarter due to high base while profitability could rise moderately on a YoY basis but better on a QoQ basis. “Pre-season stocking up could be one of the reasons for this. Goods and services tax (GST) and advance tax collections display encouraging results at topline, but removing the raw material and fuel inflation profitability is a bit tricky to forecast on an overall basis,” he said.

Indian markets outperformed global peers in September despite the volatility and rate hike by the Reserve Bank of India amid inflationary pressures and weak currency. A real test of markets will be to cross past the hurdles of a lower-than-estimated corporate earnings if they fail to deliver.

“Markets may not take too much cognisance of the actual earnings even if they disappoint minorly as the focus would be on the future when the rising interest regime may not continue for long. Nifty EPS could see another minor round of downgrade post the Q2FY23 results as analysts cut back their aggressive projections of bottomline growth due to raw material inflation effect,” Jasani cautioned.