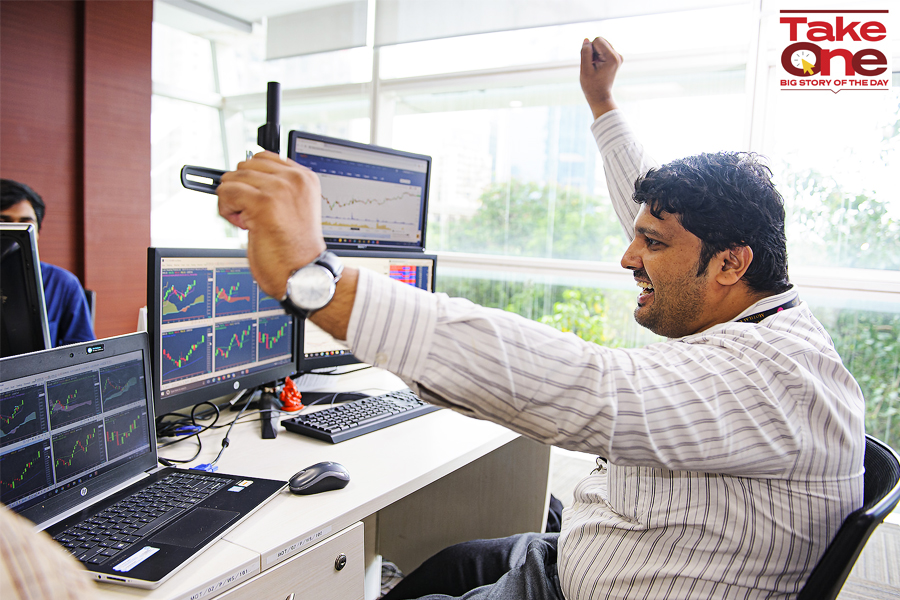 With inflation expectations remaining elevated globally, investors have begun to question whether the outperformance of Indian bonds can last


While bond investors the world over have had a torrid six months, those who invested in Indian bonds are laughing all the way to the bank. As rates have normalised the world over, they’ve had to put up with none of the mark-to-market losses that bond portfolios the world over have suffered. In fact, the yield on the Indian 10-year has barely moved from about 7 percent to 7.38 percent since the Union Budget on February 1.

Contrast this with the US 10-year that has moved from 1.7 percent to 3.57 percent with brief detour to 4 percent. Or the German bund (10-year) that rose from 0.03 percent to 1.83 percent or the Japanese 10-year that moved into positive territory to 0.22 percent and the outperformance becomes stark.

“Expectations at the beginning of the year was that Indian bonds will also underperform.  But the Reserve Bank of India (RBI) has moved in sync with global rise in rates,” says Upasna Bharadwaj, chief economist at Kotak Mahindra Bank.

With inflation expectations remaining elevated globally, investors have begun to question whether the outperformance of Indian bonds can last. While it is hard to predict which way the global macroeconomic environment will shape up, there remains a strong chance that Indian bonds will hold their own.

First, let’s consider why we outperformed. In most western economies, the rise in rates has come about as a result of the normalisation of monetary policies. Savers have moved from no return to a positive rate of return. In India, inflation expectations have always been at between 4-7 percent, so our rates have always been in positive territory during the pandemic period. In the last monetary policy meet on September 30, the RBI maintained its inflation forecast at 6.7 percent. At above 7 percent, Indian real rates are already in positive territory. 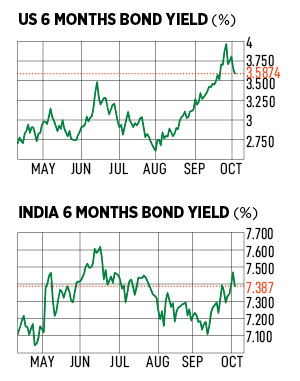 The interest rate cycle in the West has moved upwards in the last four months as investors are pricing in both higher rates as well as the possibility about them staying higher for longer. As of now, the terminal rate expectations in the US are 4.6 percent at the end of 2023 pointing to the fact that bond yields still have to climb. “A lot of investors were pricing in rate cuts in 2023 and the Fed has been pushing back hard on that,” says R Sivakumar, head of fixed income at Axis Mutual Fund.  He also argues that real rates are a fundamental driving force and in India real rates have been in positive territory.

In India, the government has moved to keep inflation expectations in check. Fuel prices have not been raised in tandem with global prices. The recent extension of the Gareeb Kalyan Anna Yojna (free food grains plan) till December was another such move and the export levies on sugar and steel all point to a desire to keep headline inflation under check.

Despite this, there have been some nervous moments for Indian bond investors. In the immediate few trading sessions after the Budget, yields rose as the market digested the deficit numbers. Then, in June, they again spiked to 7.6 percent. But as Sachchidanand Shukla, chief economist at Mahindra and Mahindra, explains, there was high frequency data that pointed to the economy doing better than expected.

Nominal GDP growth for FY23 is expected at 16 percent versus the 13 percent in the Budget numbers. “Our revenue buoyancy stands at 1.1 to 1.2 percent and so there could be Rs 100,000 crore extra tax revenues this year,” says Shukla, pointing to higher than expected GST collections. So the need to borrow, especially for the states, has been lesser than anticipated. This has kept the supply demand dynamics in check.

Last, there is India’s inclusion in the emerging market bond index. While this has been put off, most market participants believe it is only a matter of time before this happens. In anticipation of this, inclusion pension funds and insurance companies were buyers of Indian bonds. Now, even as it has been put off, no one wants to sell as they would be forced to buy again at higher prices once the inclusion happens.

Also read: All calm on the bond front

All participants Forbes India spoke to believed it was only a matter of time. Bharadwaj of Kotak points out how this inclusion is needed as credit demand for banks is picking up and the government needs to diversify its sources of funding. With buoyant forex reserves resulting in a (relatively) stable currency, the expectation is that foreign investors would find Indian bonds good value.

For now, the two jokers in the pack are a possible supply risk that the market cannot absorb. Chances of this are low as the government usually sticks to its announcements but an election cycle in 2023/24 could result in some additional supply from the states. Second, long-term inflation expectations in the US are still at 2-2.5 percent even though it is currently running at over 8 percent. If these were to move upwards, investors would demand a higher compensation of the inflation risk. In such a situation, Indian yields would need to move upwards to compensate investors for risk of holding bonds in an emerging market.

And what does this mean for equities? At present, the mainline Sensex/Nifty quote at an earnings yield of 5 percent for 2024 resulting in a 2 percent differential with Indian bond prices. While there have been some tailwinds to earnings, from sectors such as metals and exporters like IT and pharma companies, it remains to be seen how they do in a slowing world economy. As a result, bond yields have risen in the last year and equity valuations have stayed where they are. The next leg would result in them getting closer in the form of falling yields or higher earnings growth.

Tweets by @forbesindia
Photo of the day: Gearing up for finale
Why crypto's big 'merge' is causing big headaches