Did pandemic stimulus funds spur the rise of 'meme stocks'?

Remember the GameStop stock frenzy? Research by Robin Greenwood and colleagues shows how market speculation can flare up when you combine stimulus funds, trading platforms, and plain old boredom 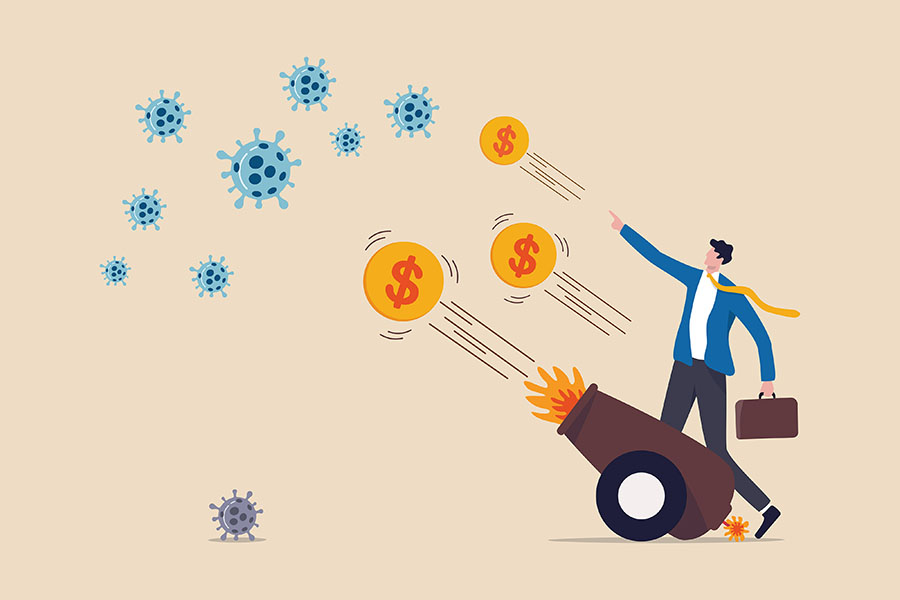 The US government set out to support consumers and jolt the economy when it issued federal stimulus checks during the early months of the COVID-19 pandemic. But actually, that money helped propel questionable investments in “meme stocks Image: Shutterstock

The US government set out to support consumers and jolt the economy when it issued federal stimulus checks during the early months of the COVID-19 pandemic. But actually, that money helped propel questionable investments in “meme stocks,” one of the most visible oddities of the period’s market boom.

Retail investors—who buy shares directly through websites like Robinhood rather than investment firms or employer-sponsored plans—snapped up stocks that appeared to have poorer prospects under traditional metrics. Remember the online frenzy over GameStop and AMC Entertainment? Their stock prices jumped after the first two stimulus payments hit in April 2020 and January 2021, driven by retail investor buying, says research by Harvard Business School Professor Robin Greenwood.

About $100 billion of the $814 billion the US government disbursed through stimulus payments found its way to the stock market. That was one of the key findings of a recent working paper co-authored by Greenwood and Toomas Laarits and Jeffrey Wurgler of NYU’s Stern School of Business.

“We've been through this extraordinary period in the markets, where the technology and speculative names have been on this dramatic run for two years, far outperforming the rest of the market,” says Greenwood, who also serves as senior associate dean for faculty development and research. “So, what drove those run-ups? To me, that's the kind of question that is relevant for any investor.”

And its answer is relevant to policymakers as they face an unexpected side effect of the trillions of dollars of economic stimulus: That money may have fed undesirable stock market speculation.
How to follow the ‘stimmy’ money

There’s no direct way to track how stimulus funds went from American pockets into the market, so researchers looked at a wide range of signals, including surveys, US Census and Treasury data, social media posts, online forums, and Financial Industry Regulatory Authority (FINRA) trading information.

In one analysis, the team used FINRA data to compare two groups of more than 500 stocks that retail investors likely targeted. To get a sense of timing, the researchers used US Treasury press releases and Government Accountability Office reports to trace when recipients received stimulus funds.

Retail trading spiked shortly after the government released stimulus checks, and stocks with high retail trading volumes climbed the most, the authors say. Retail-driven stock portfolios also showed “abnormal returns” of 5-7 percent within a few days of the first and second rounds of stimulus checks, according to the paper.

Within three weeks of the first stimulus round, prices of those shares had climbed by 15 percent to 18 percent. They reached 24 percent after the second round. When the third stimulus payment rolled around, there was no discernable bump. While it’s not clear why the third payment didn’t show a similar bump, Greenwood notes markets tend to anticipate behavior ahead of an event. The stocks’ climb may have already been priced in.

Several surveys of retail investors reinforced their findings. Among 430 online brokerage users surveyed in February 2021, for example, 72 percent received stimulus checks and half of them planned to invest those funds.

Also read:  Game of IPOs: The sizzle and fizzle of internet companies

To test their work further, researchers examined how Hong Kong’s similar cash payouts affected its markets, and found a similar pattern.
Why the meme craze happened

Many meme stocks—named for the superficial internet buzz that boosted investor interest—have since come down in value in 2022. After all, their rise wasn’t prompted by strong fundamentals, the paper notes.

One reason for the jump in retail stock buying after the first two payments could be the “bored market hypothesis,” the authors write. Platforms like Robinhood made online trading accessible, inexpensive, and fun.

"Our evidence would suggest that there's a channel by which some of the dollars literally go into the stock market, driving up prices beyond their fundamental value."

“Robinhood has had two fundamental innovations. One is that it's free. And the second is that it allows you to trade fractional shares,” Greenwood says. “That, combined with this period where people didn't have that much to do, I think this was a recipe for a boom in retail stocks.”
What about the next cataclysmic event?

Was the pandemic unique or will the same pattern in the markets emerge amid the next catastrophe? The findings have policy implications, Greenwood says.

“One of the questions that our work raises is: If the government were to deploy the vast dollars of funds, which in the US were extraordinary, in different circumstances, would we find the same thing?” Greenwood asks.

The run-ups also show a potential new way money can find its way into markets—and the economy, Greenwood notes.

“Our evidence would suggest that there's a channel by which some of the dollars literally go into the stock market, driving up prices beyond their fundamental value,” Greenwood adds. “That is a lesson for policy makers.”