During the country's worst-ever economic crisis, which has driven rampant inflation and spurred protests that last week brought down the president, Sri Lankans are buying less, eating less and working less 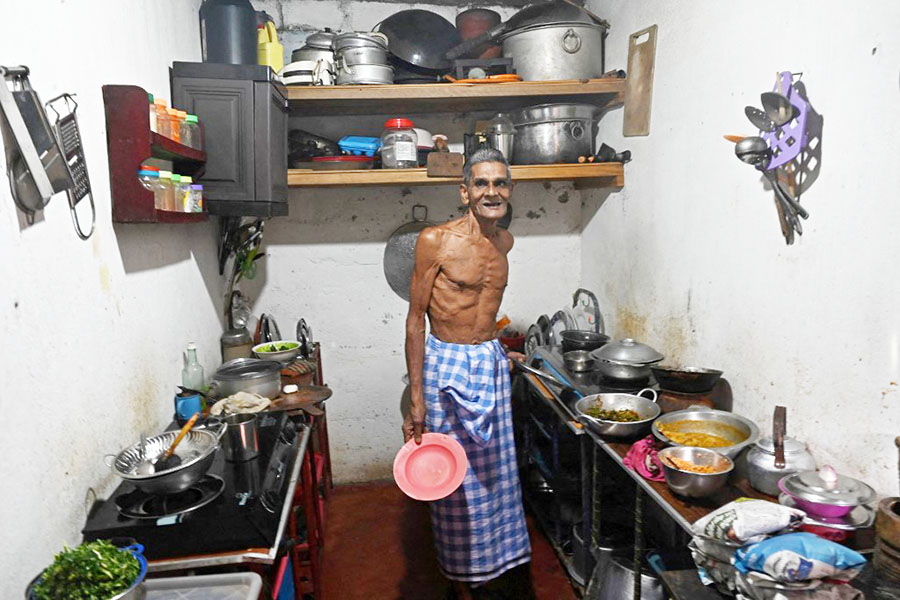 This photo taken on July 17, 2022 shows Milton Perera looking on in his kitchen in the Slave Island neighbourhood of Colombo. In the face of a months-long economic crisis that has seen rampant inflation and protests that last week brought down the president, Sri Lankans are buying less, eating less and working less. Image: Arun SANKAR / AFP

His hair is neatly combed but his cheeks are sunken and veins visible on his gaunt frame: like many Sri Lankans, Milton Pereira and his family cannot afford to buy enough food.
During the country's worst-ever economic crisis, which has driven rampant inflation and spurred protests that last week brought down the president, Sri Lankans are buying less, eating less and working less.
"It's very difficult to live, even a loaf of bread is expensive," Pereira told AFP outside his modest home in Slave Island, a poor enclave of the capital Colombo.
"If we take one meal, we skip another."

With six children in the family, the 74-year-old said the best they had been able to afford in recent weeks was the occasional fish, cut into small pieces for everyone.
"Because we don't have much money, sometimes we give the fish to the children," he said. The adults, he added, "only eat the gravy".
Triggered by the coronavirus pandemic, the country's financial woes were exacerbated by government mismanagement, critics say.
Peirera's son, B. G. Rajitkumar, is an electrical labourer who has had no work for months.
"Food prices go up every day," he said. "This exponential price rise is the most terrible thing I have ever faced."
Food inflation in Sri Lanka reached 80.1 percent in the year to June, according to official figures.
Also read: Lavish projects and meagre lives: The two faces of a ruined Sri Lanka
At a nearby vegetable store, residents pay 1,000 rupees ($2.80) for a kilo of gourd, twice as much as three months ago, and owner Mohamad Faizal said some of his customers were now buying as little as 100 grams a time.
"The prices have gone up," he said. "The main reason is there is no way to transport those items because there is no fuel."

With no foreign exchange reserves for imports and having defaulted on its $51 billion foreign debt, Sri Lanka is experiencing dire shortages of fuel, medicines and other essentials.
According to the World Food Programme, nearly five million people—22 percent of the population—need food aid.
In its latest assessment, it said more than five out of every six families were either skipping meals, eating less or buying worse food.
While food is not in short supply, the issue is affordability.
The city's New Manning main wholesale vegetable market was bustling on Sunday as buyers, sellers and porters jostled with sacks of produce.
But traders say business has gone down by more than half since March.
Also read: Sri Lanka's many missteps that led its economy into a tailspin
"Prices for everything have more than doubled," said trader M. M. Mufeed. "Some unsold vegetables go to waste and many poor people come to take away some of it every day after the market closes."
His sales are down 70 percent, he added. "Sometimes I sell to poor people for much less to avoid wasting food and make up somewhat."
But potatoes, onions and garlic continue to be imported from India, Pakistan and China, said import-export bussinessman Ashley Jennycloss.
"Supply of food is not a problem, but because there is no fuel that makes it difficult and everything becomes expensive," said Jeeva, another trader, who gave only one name.
Some people travel long distances on foot to the New Manning market in the early morning to buy small amounts of vegetables for their kitchens at bulk rates.
"I have no option but to walk 10 kilometres to this market because food is cheaper here compared to retail stores near my home," said 50-year-old Howzy, who gave one name.

The protest movement that brought down Rajapaksa has its headquarters outside his former office, where dozens of volunteers work in a patchwork of tents lining the seafront promenade.
Among them, former government employee Theodore Rajapakse—no relation—is teaching people how to produce fast-growing vegetables in small patches of land near their homes.
"My country is in trouble," he said, adding that he has taught around 3,000 protesters since he joined the demonstrations.
"You can grow 100 kilos of pumpkin in a three-feet-by-three-feet patch of land," he added.
But the prospects of immediate improvement in Sri Lankans' plight are limited, and the most likely successor as president, former prime minister Ranil Wickremesinghe, is reviled by the protesters as a Rajapaksa ally.
Also read: Cash-strapped Sri Lanka to sell 'golden' visas
At Slave Island—an area named after a staging post the Portuguese used for slaves from Africa during the colonial period—Pereira had little hope.
"Gota is gone, but there is no one candidate to lead us out of this terrible condition," he said.
"Politicians are divided. So it will get worse, what else can happen?"
© Agence France-Presse