No petrol, no cars: Why Cubans are turning to electric transport

As fuel shortages and US sanctions take their toll, and even though electricity generation can be spotty, Cubans are turning to smaller, cheaper, plug-in electric alternatives 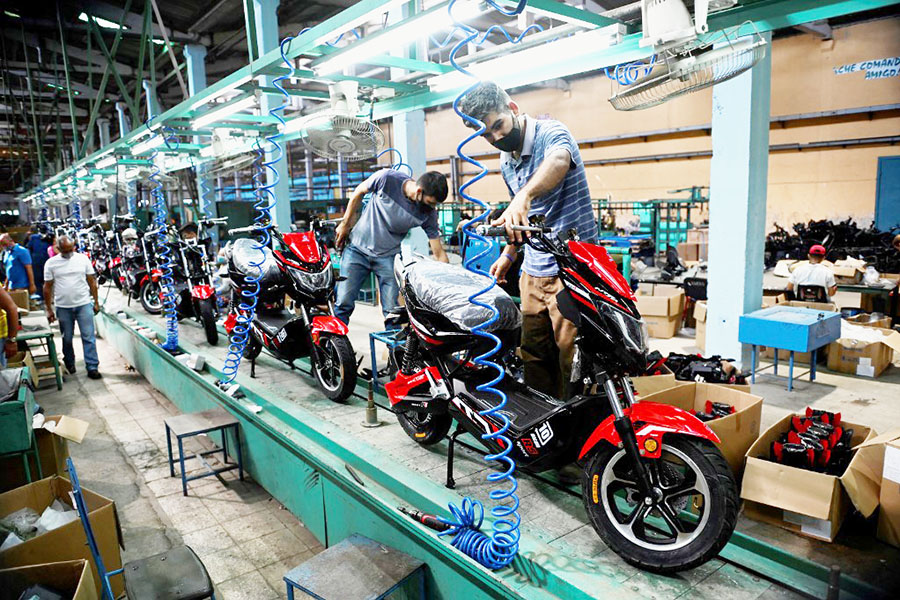 Workers assemble motorcycles at the Angel Villareal Bravo assembly plant, better known as Minerva Cycles, in Santa Clara, in the Cuban province of Villa Clara, on April 26, 2022. Cubans are opting for motorcycles, tricycles and electric cars in the face of the public transportation and fuel shortage crisis. Image: Yamil Lage / AFP

Santa Clara, Cuba: There is a new sight on the streets of Havana: increasing numbers of electric vehicles whizzing among the old American cars so emblematic of the Cuban capital. As fuel shortages and US sanctions take their toll, and even though electricity generation can be spotty, Cubans are turning to smaller, cheaper, plug-in alternatives.

"Gasoline? Imagine. After 50 years battling to get hold of it, I don't even want to smell it anymore!" taxi driver Sixto Gonzalez, 58, told AFP atop the shining, electric-blue quadricycle with which he moves through the streets at a top speed of about 40 kilometers (25 miles) per hour.

Gonzalez has abandoned his old, combustion-engine car—one of about 600,000 registered on the island of 11.2 million people, according to official data.

The last time he tried to fill it up, he stood in a queue for eight hours.

By far the majority of cars in circulation in Cuba are American models from the 1950s—before sanctions started—and compact Ladas from the Soviet era.

Newer models are practically impossible to lay one's hands on and come with a hefty price tag of between about $20,000 and $100,000.

The quadricycle Gonzalez bought, by comparison, can be obtained for between $4,000 and $8,000 and though slower, can get four or five people from Point A to Point B.Also read: Most automakers fall short on climate goals: report

Also increasingly popular are electric motorbikes—of which there are an estimated 40,000 to 50,000 in Cuba—and three-wheelers all the more frequently seen dragging a carriage full of passengers or goods.

In a once-abandoned Soviet-era truck factory in the central city of Santa Clara, about 100 workers of the company Minerva assemble electric vehicles with parts imported from China or Vietnam.

"I had to buy one because the fuel ran out and the queues are endless," said Raul Suarez, a 52-year-old security guard who got himself an electric motorbike.

"I have to be able to get around."

Not only are cars prohibitively expensive and scarce, but public transport in the capital is a daily ordeal for many.

Half of buses are out of service for a lack of tires and batteries that cannot be imported due to US sanctions, said transport ministry official Guillermo Gonzalez.

Havanans sometimes wait for hours for a bus to get to work or back home.

At the same time, fuel shortages have worsened since the US reinforced its six-decade-old economic blockade of the communist island in 2019, preventing the arrival of fuel tankers from Venezuela, a Cuban ally.

Petrol supply plummeted from 100,000 barrels a day to about 56,000 barrels per day on average in 2021, said Jorge Pinon, a Cuban energy policy expert at the University of Texas.Also read: Renewable energy to grow to new record in 2022: IEA

Three years ago, the government began to promote the use of electric cars, introducing them to state-owned companies to be used by workers.

"Cuba is a museum on wheels," said Gonzalez of the abundance of decades-old gas guzzlers.

It is hoped that a rollout of electric cars will lower "fuel consumption... and at the same time reduce pollution," he added.

But electricity supply, too, is a concern.

For weeks now, Cubans have had to deal with regular cuts, sometimes lasting hours at a time, due to generation failures and maintenance work on thermoelectric plants.

And in a bid to make up some of the shortage, the authorities have turned to generators that use up much of the limited diesel stock.

"There has never been a situation as difficult as the one we have now, and there are still three months of summer to come," said Pinon, alluding to the annual warm-weather rise in demand for energy to run air conditioners. Also read: High gas prices drive hunt for electric vehicles

Ramses Calzadilla, director of strategy at Cuba's energy ministry, said he was confident that electricity generation would be restored to full capacity shortly and insisted the situation did not threaten the burgeoning electric vehicle sector.

"An electric motorcycle uses about as much energy as a refrigerator," he told AFP, and can be charged quickly and cheaply between programmed power cuts.by Leticia PINEDA