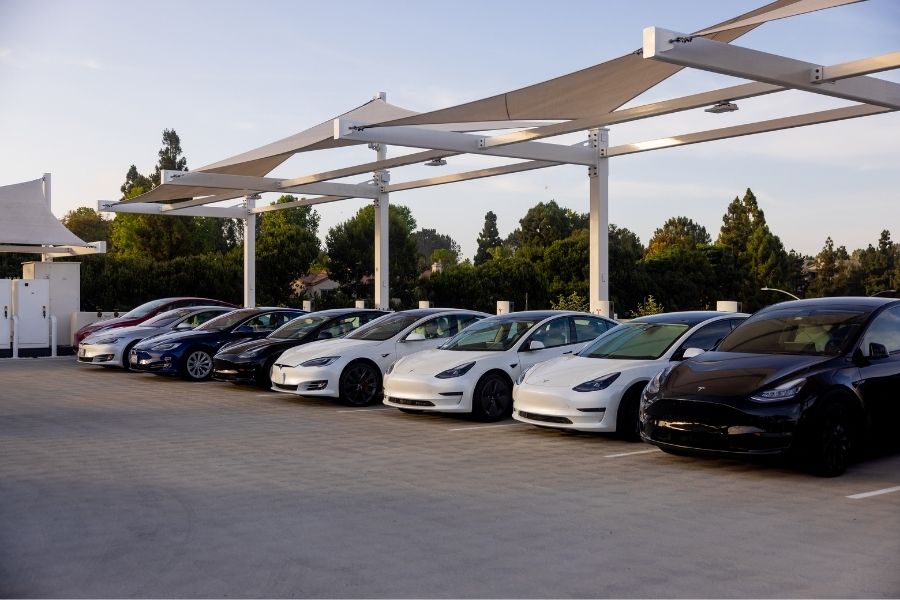 Thinking about buying an electric car? You’re not alone.
With gas prices painfully high and a series of climate reports underscoring the urgency of moving away from burning fossil fuels, more Americans are expressing interest in electric vehicles.
Google searches related to electric cars have skyrocketed, reaching a record number last month. On automotive classifieds website Cars.com, searches for electric vehicles increased 43% from January to February and an additional 57% from February to March. And automakers are ready with encouragement: Almost all of the car commercials during the Super Bowl in February featured electric vehicles.
But the journey to actual purchases that put more electric vehicles and fewer gas-powered vehicles on roads in the United States has two major roadblocks: the supply of cars and infrastructure to charge them.
With the United States, like most countries, struggling to find the political will to make the drastic changes needed to limit climate change, there is no question that more people switching to electric vehicles would be a positive step.
Even before gas prices started rising, electric-vehicle supply was strained by a number of factors. That includes the supply-chain problems, particularly shortages of items such as semiconductors, that have hampered the auto industry as a whole. The war in Ukraine has further disrupted production, and long waitlists for electric vehicles are common.
Shortages are not universal, of course, but the places where demand is increasing are not necessarily the same places where supply is keeping up. In states such as Arizona and Georgia, demand is significantly higher than supply on Cars.com right now, according to the website’s editor-in-chief, Jenni Newman. California has both the highest demand and the highest supply.
Although gas prices “should further raise interest in EVs, hybrids and overall fuel efficiency because the economics become even better than they had been (which was already good), consumers may not be able to get what they want and need,” David Friedman, vice president of advocacy at Consumer Reports and former acting administrator of the National Highway Traffic Safety Administration, said in an email.
This “reinforces the need for strong standards, because the better choices need to be available before the price spikes, not in response to them,” Friedman said, referring to policies such as fuel emission standards that create an incentive for automakers to invest in electric vehicles.
Once people start driving electric vehicles, the second obstacle becomes clear: the limits of public charging infrastructure. More cars will need more places to charge, preferably in places close to electric vehicle owners.
So far, most of the people buying electric vehicles have been people with the capacity to charge them at home — homeowners with a garage, for instance. That’s an excellent option for many Americans, experts say, but it’s not feasible for everybody. And even some people who can charge at home express concern about what the relative scarcity of charging stations would mean for their ability to travel long distances if they were to switch to an electric car.
“Right now, the people that buy electric vehicles, almost all of them have their own home and a place to charge it,” said Daniel Sperling, a professor of engineering and environmental policy at the University of California, Davis, and founding director of the university’s Institute of Transportation Studies. These buyers tend to be affluent and often own multiple cars, meaning they may use an electric vehicle for everyday commuting but also have a gas-powered vehicle for longer trips.
For people who don’t have multiple cars and live in apartment buildings in densely populated cities where even regular parking is hard to come by, charging an electric vehicle is not as easy as plugging it into a garage outlet, and its range between charges becomes a more pressing question.
This hurdle is not necessarily immediate. “In the short term, the infrastructure can meet a ramp-up in demand, absolutely,” said Luke Tonachel, director of clean vehicles and fuels at the Natural Resources Defense Council.
In the longer term, though, the International Council on Clean Transportation found last year that the United States would need to increase the number of public chargers by an average of 25% to 30% annually through 2030 “to prevent charging infrastructure from being a hurdle to the electric vehicle market,” said Dale Hall, a senior researcher at the council.
Some of this is already happening, Tonachel said. Utility companies have invested more than $3 billion in charging infrastructure, he said, and pending applications, if approved, would add billions more. The bipartisan infrastructure bill that Congress passed last year included another $7.5 billion for charging stations, and, more broadly, the Biden administration is spending tens of billions of dollars to promote electric vehicles.
But geographical disparities remain in where those chargers are installed. And a basic problem remains: profit.
“It’s very difficult, if not impossible, to make a profit selling electrons to vehicles,” Sperling said, noting that for now, most public chargers are subsidized in some way, either by government funding — federal, state or local — or by employers who treat it as a perk. But “in the future, we’ll probably need one public charger for every 10 vehicles,” Sperling said. “And it’s very unclear how this is going to happen.”

Tweets by @forbesindia
Etsy and the sameness of Internet fights
How Cummins, a century old maker of dirty diesels, is now leading the hydrogen charge