Even as markets worldwide suffer from surging inflation and mounting recession fears, the maker of the 911 sports car has pushed ahead with the bold flotation that gives Porsche a valuation of more than 76 billion euros 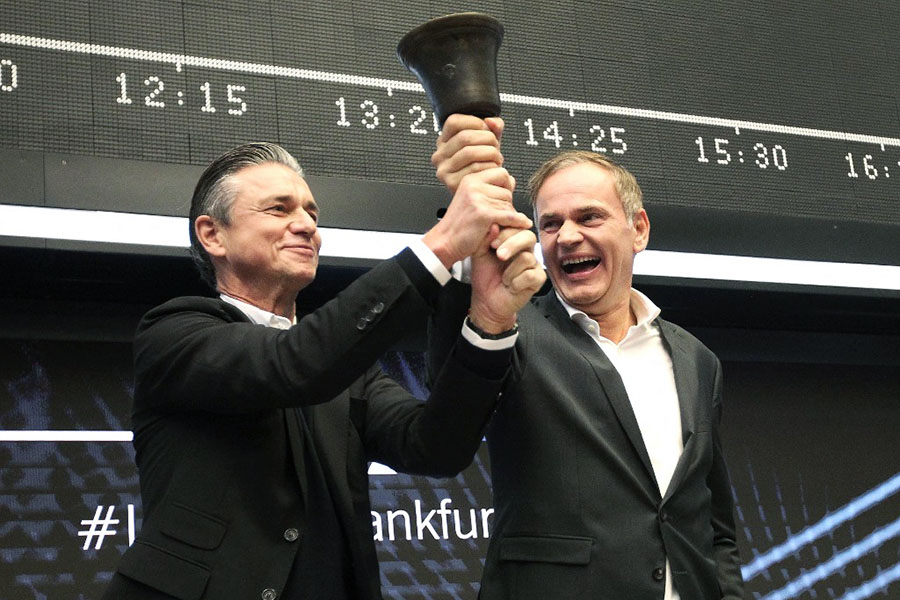 Luxury sports carmaker Porsche raced onto the Frankfurt stock exchange Thursday with one of Europe's biggest listings in years, leveraging its brand power to defy global market turmoil.
Its shares rose to over 84.70 euros ($81.90) in morning trading, bettering the 82.50 euros price set by its parent company Volkswagen, and outperforming a weak Frankfurt market.
Even as markets worldwide suffer from surging inflation and mounting recession fears, the maker of the 911 sports car has pushed ahead with the bold flotation that gives Porsche a valuation of more than 76 billion euros.
The carmaker's chief Oliver Blume said the listing was a "historic moment for Porsche", as he rang the bell to mark the start of trading at the Frankfurt exchange.

"A big, proud day for all of us... We are adding a new chapter to the unique history of Porsche," added Blume, who is also the CEO of the wider German auto group Volkswagen.
Volkswagen is set to raise 9.4 billion euros ($9.2 billion) from the listing, with some to be ploughed into the group's shift to electric vehicles that is bringing it into greater competition with US rival Tesla.
In terms of value of shares issued, Porsche's is the biggest stock market debut in Germany since Deutsche Telekom's in 1996, and the largest in Europe since the 2011 flotation of Switzerland-based commodities giant Glencore.

Analysts have looked to the carmaker's market entry for some cheer against a morose economic backdrop, with investment bank Berenberg saying it could "offer a catalyst in an industry sorely lacking positive surprises".
It has generated buzz in Porsche's home market of Germany, where top tabloid Bild described it as "crazy, cool, fast-paced".
"Sports car icon Porsche goes full throttle and races onto the stock market," read a column in the paper.
Also read: 'We're seeing down trading, price correction of luxury cars'
It has also drawn interest from major investors, including Qatar and Abu Dhabi's public investment funds, Norway's sovereign wealth fund and US asset management firm T. Rowe Price.
The IPO has seen 113.9 million shares of "Porsche AG" issued.
While the carmaker's valuation is below some earlier estimates, it still catapults it above rivals such as BMW, with a valuation of 47 billion euros, and Mercedes-Benz, with a 56-billion-euro capitalisation.

Porsche has joined the electric drive of the Volkswagen group, whose brands also include Audi and Skoda, in earnest.
The electric "Taycan" has been the brand's best-selling model since January, an electric version of the "Macan" is due in 2024, as well as the launch of a new SUV in the middle of the decade.
The electric strategy includes building battery factories across Europe and the US.
Volkswagen announced this week it will work with Belgian group Umicore to produce battery materials.
The IPO sees preferential shares sold to investors, which have no voting rights, while Volkswagen is also selling 25 percent of the carmaker to Porsche SE.
The eponymous company is a listed holding controlled by the Porsche-Piech family, who in turn are the main shareholders in Volkswagen.
This means that Porsche SE will have a blocking minority that will allow it to steer the future of the company.
Also read: Ford unveils newest Mustang, extending gasoline-powered life
Volkswagen hopes that listing a minority stake in Porsche will push up its own stock market value, which is 85 billion euros—just a fraction of Tesla's, at just over $900 billion.
While the Porsche IPO generated excitement, concerns surrounding governance have been brewing at Volkswagen.
The dual role of Blume—who has kept the top job at Porsche, despite being recently appointed CEO of Volkswagen group—has in particular raised eyebrows.
By Sam Reeves
© Agence France-Presse