The boisterous launch was deemed a celebration of the 58-year-old model, and showcased the staying power of gasoline-powered vehicles at Ford 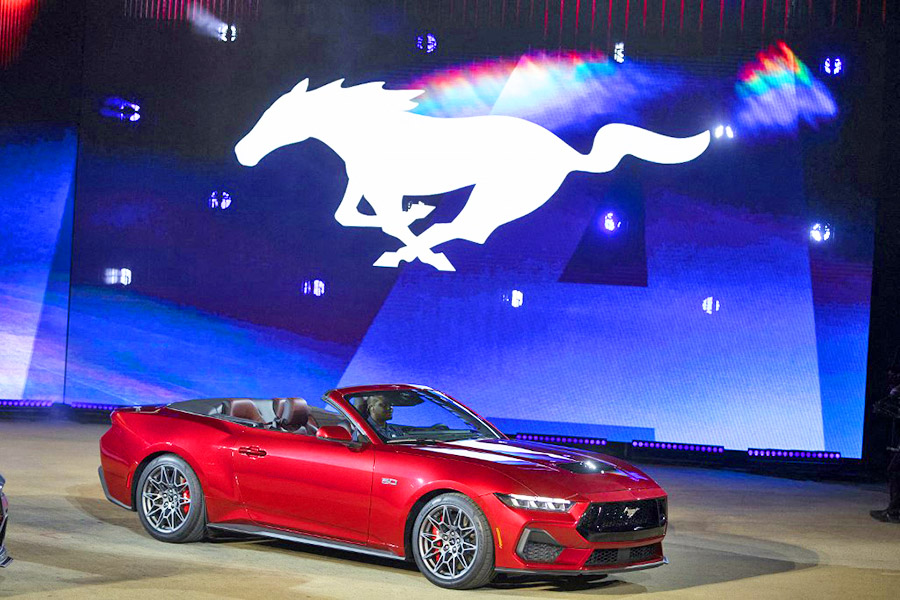 Detroit, United States: Ford unveiled Wednesday its seventh-generation Mustang in a brash and boisterous launch event in downtown Detroit that pointed to the staying power of gasoline-powered vehicles. The big reveal had been teased for months by company officials and organized as a celebration of the 58-year-old model. The event, organized for Ford employees and Mustang mavens, featured pulsating music, slickly produced videos on wide screens and a light projection of the brand's horse logo onto a city building that loomed in the background.The 50-minute event culminated with the arrival of three sleek new sedans in different trims and, later, a fourth option, a racing vehicle called "Dark Horse" that was introduced dramatically by Ed Krenz, Ford's chief functional engineer for performance."Its name is indicative of its design and its aspirations," Krenz told a cheering crowd. "Its demeanor: absolutely sinister. Dark Horse is for the enthusiast who wants purebred force of nature."

Ford, which has dived into EV investment as much as any company in recent years, had refrained ahead of Wednesday from saying whether the new Mustang would be electric or gasoline-powered.But the company made no apologies for its choice to go with the internal combustion engine (ICE)."Investing in another generation of Mustang is a big statement at a time when many of our competitors are exiting the business of internal combustion vehicles," said Jim Farley, CEO of Ford Motor Company in a press release, adding that the company is "turbocharging" ICE growth even as it invests $50 billion in EV growth through 2026.Also read: Ford to cut 3,000 jobs in a push towards electric
Mustang brand manager Jim Owens said some customers prefer the "visceral" feeling of an ICE vehicle, adding that the company has already released an EV version of the Mustang, the Mach-E sport utility vehicle."We know that there are customers out there in the sports car segment who still want the internal combustion engine," he told AFP in an interview before launch."There are a lot of late millennials and early Gen Zers who are into the sports car segment, and we think we have some wonderful things in here that are going to draw them in," he said.

The latest Mustang — once the inspiration for a Serge Gainsbourg song and seen in some 3,000 movies — features a "fighter jet-inspired" interior and performance features that make it "the most exhilarating and fun-to-drive yet," Ford said.The newest Mustang nods to earlier versions in its lighting and grille design, while also employing the latest in digital technology. This includes a key fob that lets drivers who love the sound of an engine revving satisfy their fix with the press of a button.Also read: Most automakers fall short on climate goals: report
By extending the Mustang's run, Ford runs counter to some other brands such as Dodge, which in August said it was phasing out its gasoline-powered muscle car models, the Challenger and the Charger.Ford's vehicle launch event also harked back to the spectacle of past car shows, even though the industry has been moving away from that marketing model in favor of online launches.The Detroit Auto Show of yore was known for stunts such as the 1992 arrival of the Jeep Grand Cherokee, which announced itself by crashing through glass.Also read: India's EV boom is built on mopeds and rickshaws. Not Teslas
For Wednesday's Mustang launch, Ford organized a "Stampede" of earlier Mustangs that caravaned from around the country to Hart Plaza in downtown Detroit, creating an impressive row of Mustangs that went on for blocks. Participants were encouraged to participate in a best-dressed contest of "attire inspired by their favorite period in Mustang history, from the 1960s through today," with the first-place prize a two-year car lease for a new Mustang.The event also appeared to be intended as a morale boost for "Motor City," where the auto show has been revived for the first time since 2019 after pandemic cancellations. Presenters repeatedly acknowledged the contribution of local Ford employees, especially at the nearby Flat Rock Assembly Plant, where the Mustang is built.By John BIERS
© Agence France-Presse

Tweets by @forbesindia
How to double farmers' income? Digitisation will show the way
TikTok search results rife with misinformation: Report