Sitting at the wheel of a prototype F-150 pickup truck at the company's test track in Dearborn, Michigan, CEO Jim Farley floored it. From a standing stop, the 4,000-pound truck surged forward and hit 60mph in four seconds 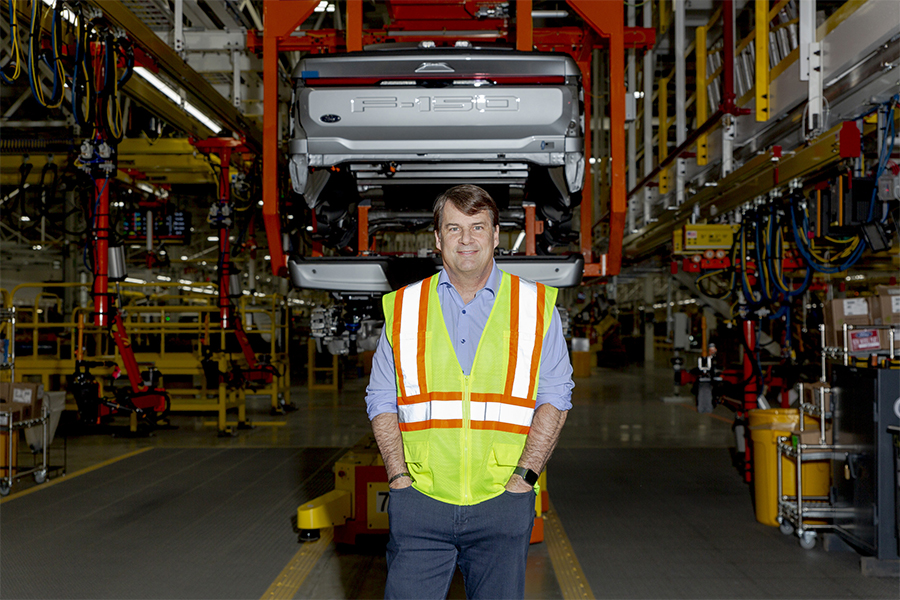 Jim Farley, Ford’s chief executive, at the company’s production plant in Dearborn, Mich., April 4, 2022. Ford is about to introduce an electric F-150 pickup truck that could determine whether the automaker can survive and thrive in an industry dominated by Tesla. (Sylvia Jarrus/The New York Times)

On a recent Tuesday afternoon, Ford Motor CEO Jim Farley took a spin in what could become one of the most important vehicles in the company’s 113-year history: an electric F-150 pickup truck.

Sitting at the wheel of a prototype at the company’s test track in Dearborn, Michigan, Farley floored it. From a standing stop, the 4,000-pound truck surged forward. “Four seconds,” he shouted when it reached 60 mph. “That’s unbelievable for a vehicle of this size.”

Steering the truck to a series of dips and rises in the track, he said, “Let’s see if we can get some air,” and shouted “Yes!” as the wheels briefly left the tarmac over one incline. In a final lap, he careened around a steeply banked turn and floored it again on a straightaway until he hit 99 mph — just short of the track’s 100 mph speed limit.

“I can’t wait,” Farley said as he stepped out, shaking his head. “I can’t wait till customers get this truck.”

These are tense and exciting times for the auto industry. Driven by the dizzying success of Tesla, sales of electric vehicles appear to be on an unstoppable rise. The switch from making gasoline-powered cars and trucks to electric vehicles that emit no pollution from tailpipes will have far-reaching effects on the environment, climate change, public policy and the economy.

The question for Ford is whether a car guy from the Detroit area can take on Tesla CEO Elon Musk, whose company is rapidly expanding and is valued by investors at about 16 times as much as Ford.

“The traditional auto industry is pretty far behind Tesla,” said Earl Hesterberg, CEO of Group 1 Automotive, a large auto retailer, who has known Farley for two decades. “In the past, if you were behind by a few years, the big players could catch up. But today, the speed of change is so much greater.”

Auto experts say the electric F-150, known as the Lightning, must be a success if Ford is to thrive in the age of electric vehicles. Introducing this truck now is equivalent to “betting the company,” said executive chair William Ford Jr., who is a great-grandson of Henry Ford. “If this launch doesn’t go well, we can tarnish the entire franchise.”

Production of the F-150 Lightning is scheduled to start April 25. Competing models from General Motors, Stellantis and Toyota — Ford’s main rivals in pickups — are at least a year away. Rivian, a newer manufacturer that Ford has invested in, has begun selling an electric truck but is struggling to increase production.

“If the Lightning launch goes well, we have an enormous opportunity,” Ford said.

In many ways, Farley checks most of the boxes when it comes to leading a large U.S. automaker. Like GM CEO Mary Barra, whose father used to work on a Pontiac assembly line, Farley has family roots in the industry: His grandfather worked at a Ford factory. On visits to his grandfather, he would tour Ford plants and other sites important to the company’s history. As a 15-year-old, he bought a Mustang while working in California one summer and drove it home to Michigan without a license. His grandfather nicknamed him “Jimmy Car-Car.”

But like Musk, a native of South Africa who was a founder of PayPal and other companies, Farley has had a varied career and been involved in creating businesses. Born in Argentina when his father was working there as a banker, Farley, 59, also lived in Brazil and Canada when he was growing up. His career started not in the auto industry but at IBM. He spent a long stretch at Toyota. He helped the Japanese automaker overcome its reputation for making boring and economical cars by working on its fledgling Lexus luxury brand, now a powerhouse.

“He has what I call a restless mind,” said Jim Press, a former senior executive at Toyota and Chrysler. “His mind is never idling, always contemplating. He has a boldness that helps him push beyond what others think.”

In 2007, Alan Mulally, Ford’s CEO at the time, hired him to help turn around Ford. He sharpened the company’s marketing, often making early use of Facebook and social media, and ran its European operations.

Some at Ford bristled at his intensity. “Worrying about hurting people’s feelings isn’t at the top of his agenda,” Hesterberg said. “But it’s probably what’s necessary these days. The traditional auto industry is behind Tesla, and business as usual isn’t going to cut it.”

In the past few years, Farley reevaluated Ford’s strategy, visited technology companies in California and came to a realization: “They’re after our customers.”

The Ford truck team’s first estimate for how many Lightnings it might sell was a paltry 20,000 a year. The estimate was oddly low because Tesla was achieving sales growth of about 50% a year and planning to build two giant factories.

Cars are about software now

In part because of his team’s lowball estimate for Lightning sales, Farley, who became CEO in December 2020, said he was increasingly convinced that Ford needed to transform itself.

Many auto executives acknowledge that one of Tesla’s main advantages is that it is far ahead of established automakers in developing software that operates its motors, manages it batteries, and informs and entertains drivers and passengers. Partly as a result, Tesla, born in Silicon Valley, makes cars that go farther on a full battery than cars made by almost anybody else.

Farley said it was so critical for Ford to beef up its software chops that he spent months recruiting one of the top names in auto technology, Doug Field, who has held senior positions at Tesla and Apple.

In an interview, Field, who early in his career worked at Ford, said he was drawn by the chance to build a technology team at a company with a century’s expertise in engineering and manufacturing. “If we can combine those, that is going to be something to be reckoned with,” he said.

In March, Ford announced it was separating into two divisions — one, Ford Blue, will continue making internal combustion models, and another, Model E, headed by Farley and Field, will develop EVs.

Computer chips are a big concern. A shortage has been disrupting auto production around the world for more than a year, and outside the Dearborn Truck Plant, a few hundred gasoline-powered F-150 trucks are parked and waiting for a minor but crucial component — the device that controls their automatic windshield wipers is delayed for the want of chips.

Before his test drive, Farley took an hourlong tour of the Lighting assembly line, looking at how much work remains.

Michael Johnson, who will bolt in the Lightning’s suspension system, highlighted one of the central concerns that many manufacturing workers have about EVs: jobs. Because EVs have fewer parts than conventional trucks, they can be made by fewer workers. Johnson was specifically concerned about a truck plant that Ford is building in Tennessee, a state that has been less welcoming to unions such as the one that represents workers in Dearborn.

“Is this plant going to be safe?” Johnson asked.

Farley replied that the Tennessee plant would build a different truck. He added that Ford planned to start making the motors and axles for its EVs, rather than buying them from suppliers. “So our own plants are going to be very busy,” he said.

Ford’s future rests on that being the case.

Tweets by @forbesindia
India and its tryst with sports, in numbers
The female soccer players challenging France's hijab ban