India's EV boom is built on mopeds and rickshaws. Not Teslas

In the United States, luxury-car buyers are snapping up Teslas and other electric cars that cost more than $60,000, and even relatively cheap models cost more than $25,000. In India, those are all out of reach of the vast majority of families but an electric vehicle movement is taking place nonetheless—not on four wheels, but on two and three

By Emily Schmall and Jack Ewing 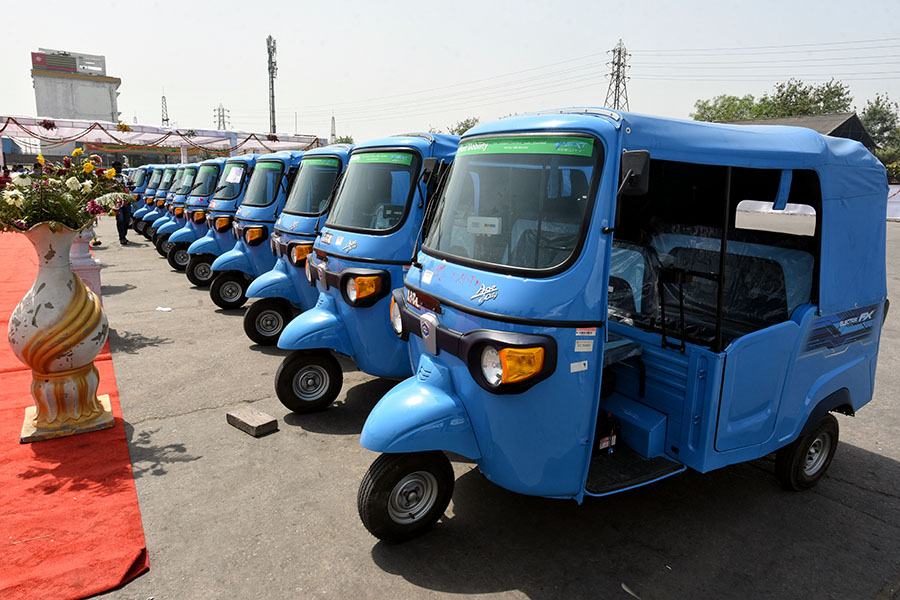 In the United States, luxury-car buyers are snapping up Teslas and other electric cars that cost more than $60,000, and even relatively cheap models cost more than $25,000.In India, those are all out of reach of the vast majority of families, whose median income is just $2,400. But an electric vehicle movement is taking place nonetheless — not on four wheels, but on two and three.Electric mopeds and three-wheeled rickshaw taxis that sell for as little as $1,000 are zipping along India’s congested urban thoroughfares, cheered on by environmentalists and the government as a way to clear some of the oppressive smog. India’s success with the low-cost vehicles is also providing a template for how developing countries could ditch combustion engines and combat climate change without pricey electric cars.

Consider Kuldeep Singh. Twice a day, he replaces the depleted lithium-ion batteries in his sky-blue Piaggio electric rickshaw with fully charged ones at swapping stations around New Delhi.“The best thing is, there’s no pollution,” said Singh, who pays about half as much for fresh batteries as he would to fill the tank of a conventional rickshaw. “I feel proud and that India will become stronger.”Indian automakers sold 430,000 electric vehicles in the 12 months that ended in March, more than three times as many as a year earlier. Most were two- and three-wheeled vehicles, with cars accounting for just 18,000, according to industry data. Americans bought about 487,000 new electric cars in 2021, a 90% increase from 2020, according to Kelley Blue Book.Almost 15 years ago, Indian tinkerers and small businesses began importing electric motors and lead-acid batteries from China to assemble cheap vehicles. With little regulation, the vehicles became popular, causing safety and other problems. But they also created a space for startups and established automakers looking to build something sturdier.Now the Indian government and auto industry are betting heavily on affordable electric vehicles. Competition and subsidies have made electric mopeds and rickshaws as cheap as or cheaper than internal-combustion-engine models. For a couple of hundred dollars, some startups are converting combustion-engine vehicles to battery power. At the same time, the recent surge in oil and natural gas prices has made it much more expensive to operate combustion-engine vehicles.Also read: EVolve 2022: Decoding the Indian EV consumer
“There are many regions in the world which don’t buy a $60,000 car,” said Bhavish Aggarwal, the 37-year-old founder and chair of Ola Electric, which makes electric mopeds at a factory in the southern state of Tamil Nadu.“Technology to serve in hotter, dustier climates or more potholed roads is very different,” he added. “India is like a very nice microcosm of the rest of the world. If we can build it here, it will be very relevant beyond.”Starting with smaller vehicles makes economic and environmental sense for India. Most of the country’s transportation fuel is used by two- and three-wheeled vehicles, and car ownership is incredibly low: There are just 22 cars per 1,000 people in India, compared with 980 per 1,000 Americans.

“If you are able to electrify two-wheelers and three-wheelers, you will have changed the game,” said Amitabh Kant, a former CEO of Niti Aayog, the government agency that created a subsidy program for electric two- and three-wheeled vehicles in 2015.

India’s experience could have global ramifications. Billions of people in Africa, Asia and Latin America don’t own cars.

One of the government’s biggest goals is to make a dent in the noxious air pollution in many large cities, especially New Delhi.

Battery-powered vehicles will not eliminate that pollution since three-quarters of India’s electricity comes from coal-fired power plants. Even electric models that get their energy from coal plants are generally responsible for less greenhouse gases overall than gasoline models. India is also investing heavily in solar energy, and Prime Minister Narendra Modi pledged last year that the country would get half its energy from sources other than fossil fuels by 2030.

“The transition to electric vehicles has to come hand in hand with electricity production,” said Fatima Arroyo-Arroyo, an urban transport specialist at the World Bank.Also read: After years of staying away, Maruti Suzuki is now desperate for electric mobility play

The transition clearly will take time. Indian automakers sold more than 16 million cars, buses, mopeds, rickshaws and other vehicles in the 12 months that ended in March, and only 2.6% were electric. But some parts of the market are changing fast: More than 45% of three-wheeled vehicles were electric.

For drivers of rickshaws like Singh, the main attraction is the money they can save on fuel so they can take home a larger chunk of their fares.

“It gives livelihood to our customers,” said Suman Mishra, CEO of Mahindra Electric, which makes rickshaws and other electric vehicles. “So it has a huge social impact.”

Manufacturers say their biggest problem is keeping up with demand.

Ola has built its factory in the middle of a sea of palm trees in a small town, Pochampalli, near Bangalore. The factory employs about 2,000 people, all women. Few Indian women work in manufacturing, and the company wants to show that they can.Also read: Auto sector needs to focus on safety, design, electric for success

Aided by robots, the women test cells, build battery packs and assemble mopeds that start at about $1,200 and are shipped directly to customers.

Aggarwal, the Ola CEO, said the switch to battery power was unlikely to happen if the world relied only on large automakers like Tesla and Ford Motor. Big manufacturers are raising prices by thousands of dollars and might never get around to making electric vehicles that are widely affordable in India and Africa.

Low-cost electric vehicles, of course, exist in other countries.

China is a leader in small battery-powered cars. A joint venture of General Motors, SAIC and Wuling sells a four-passenger electric car for $4,500. With a top speed of about 60 mph and a range of 100 miles, the Wuling Hongguang Mini EV is well suited to cities.

India is showing that there is a huge market for even cheaper vehicles.

But it is not clear whether India can scale up production to transform its own transportation system and help bring affordable electrics to other developing countries. The raw materials to make batteries are in short supply worldwide, and Indian automakers have to compete for them with larger companies like Tesla and GM.

Modi in 2014 started an effort called “Make in India” to spur manufacturing. But the campaign has had uneven results, and the optimism that India would be the next China has faded. The Indian economy was sluggish even before the pandemic, and foreign direct investment and exports have stagnated in recent years.

India is also falling far short of the job creation it needs to employ its many young people. GM and Ford recently left the country after struggling to sell cars.

“The ‘Make in India’ strategy failed to take off, accentuating India’s import dependence, especially on China,” said R. Nagaraj, a visiting professor at the Center for Development Studies in the southern state of Kerala. “Slogans are very good to energize the nation, but you can’t leave it at that.”Also read: How Maruti Suzuki is gearing up to win back its lost SUV market

India’s approach to electric vehicles appears to reflect lessons of those missteps. Rather than offering small subsidies to dozens of industries, as it did previously, the government is directing money to a few crucial areas to help Indian companies build an electric vehicle ecosystem.

Analysts said it was wise for Modi to stop courting Tesla. Its cheapest car costs about $40,000, but most cars here sell for less than $10,000.

The reason the country lags behind in use of electric cars, auto executives said, is that batteries are too expensive. “The economics don’t work,” said R.C. Bhargava, chair of Maruti Suzuki, India’s biggest automaker.

For now, most Indian officials and executives agree that their main focus should be to increase the use of electric mopeds and rickshaws.

Ola will soon make its own batteries, with government subsidies, that he vows will be safer.

India has a lot of catching up to do in other areas. There are about 930 public charging stations, according to the government, compared with about 2.2 million in China.

One company working on the effort is Sun Mobility. It is headed by Chetan Maini, who built the Reva, a small two-door electric car that came out years before Tesla’s first model.

Sun Mobility has 70 battery-swapping stations in New Delhi, and Maini intends to expand that to 500 nationwide by the end of the year. The company aims to provide modular batteries that work in any vehicle. A moped would require one, a rickshaw two and a car four.

“It’s not an India solution,” he said. “It’s a global solution.”

Aggarwal said India, home to about one-fifth of humanity, had to play a bigger role in getting the world off fossil fuels. “Without India,” he said, “it can’t happen.”