At a key summit in the Fijian capital Suva, island leaders warned time was running out to avoid "worst-case scenarios" that would see their countries—many teetering just above sea level—subsumed or rendered uninhabitable by ever-fiercer storms 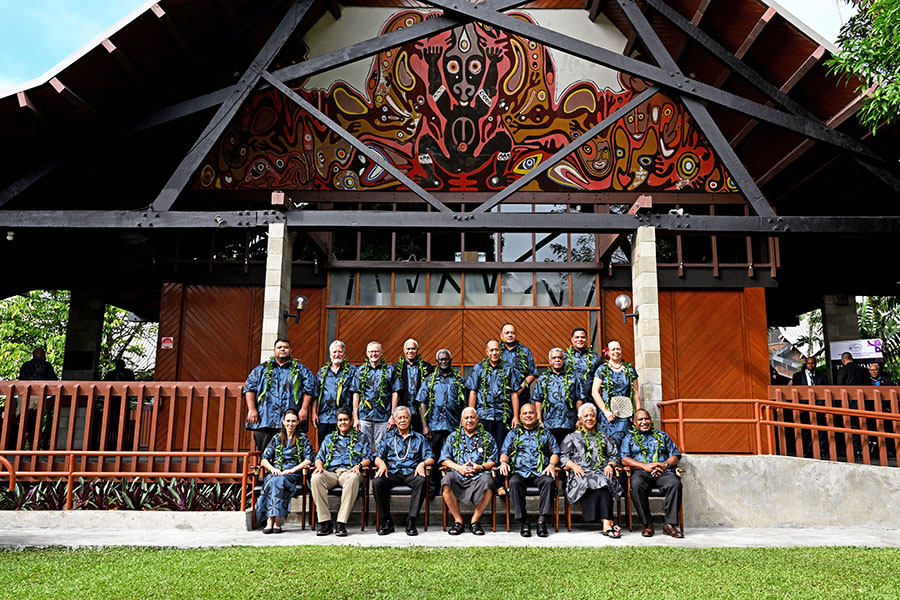 At a key summit in the Fijian capital Suva, island leaders warned time was running out to avoid "worst-case scenarios" that would see their countries—many teetering just above sea level—subsumed or rendered uninhabitable by ever-fiercer storms. Image: William WEST / AFP

Vulnerable Pacific islands demanded "urgent, immediate" global action on climate change Thursday, while stressing a commitment to democracy and the "rules-based" international order in the face of growing Chinese regional influence.
At a key summit in the Fijian capital Suva, island leaders warned time was running out to avoid "worst-case scenarios" that would see their countries—many teetering just above sea level—subsumed or rendered uninhabitable by ever-fiercer storms.
"We are at the forefront of the adverse impacts of climate change," the leaders said in a joint 2050 strategy document agreed upon after three days of talks.
"Urgent robust and transformative action" is needed "globally, regionally and nationally," they said.

This Pacific Islands Forum summit is the first to be held in person since the pandemic began, but instead of a warm reunion, the event has been overshadowed by internal divisions and a battle for influence between the United States and China.
On the eve of the summit, Beijing-allied leaders in Kiribati announced they would not attend and resigned from the forum.
The vast Pacific region is smattered with verdant sparsely populated islands but sits along major international shipping routes that make it a crucible for geopolitical rivalry.

Vice President Kamala Harris used a video address to the forum to announce the United States would be establishing two new embassies in Tonga and Kiribati, appointing a regional envoy and pumping an extra $600 million into the region.
China has made no secret of its ambition to challenge long-standing US primacy in the Pacific, deploying state-backed firms and chequebook diplomacy to build a foothold.
There was widespread alarm earlier this year when China inked a secretive security agreement with Solomon Islands, which critics fear could pave the way to establishing a military base.
Leaders noted the region's security environment was "becoming increasingly crowded" and "positioning by major powers" was taking a toll.
But echoing language often used by Washington, leaders also warned that the "rules-based order for peace and security" was coming under "increasing pressure" and that the "Pacific region is not immune."
They also committed to "democratic principles" and "human rights" that fly in the face of China's authoritarian system of government.
On the sidelines of the event, China also suffered another seeming setback, with Solomon Islands Prime Minister Manasseh Sogavare stressing his country would not host a foreign military base.
Establishing such a base would make the Solomons "an enemy" of the Pacific and would "put our country and our people as targets for potential military strikes", Sogavare told broadcaster RNZ Pacific.
The "Solomon Islands government will never allow our country and people to become military targets," he said.
Sogavare made similar assurances when he met with Australia's new Prime Minister Anthony Albanese for the first time Wednesday.
Sogavare embraced Albanese on the sidelines of the Pacific Islands Forum, telling the Australian leader: "I need a hug".
By Maddison Connaughton
© Agence France-Presse

Tweets by @forbesindia
Netflix cheaper subscription plan with ad support in works with the help of Microsoft
From Barack Obama for narration to Chadwick Boseman for 'What If...?': Five key takeaways from Emmy nominations