In Svalbard, climate change has meant shorter winters; temperatures that yo-yo; more frequent precipitation, increasingly in the form of rain; and thawing permafrost—all conditions that increase the risk of avalanches and landslides 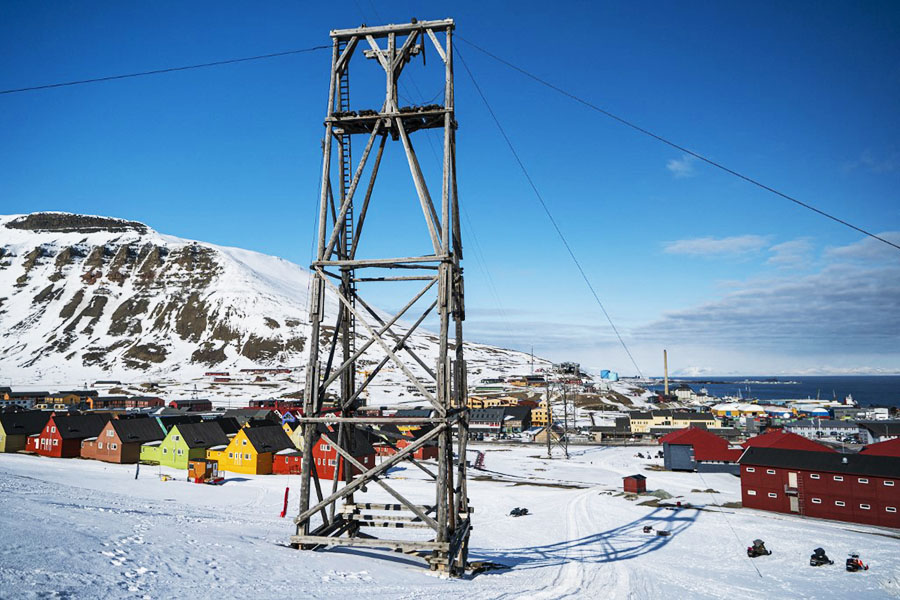 Conveyor towers once used for transporting coal from the mines to the harbour, are pictured in Longyearbyen on May 6, 2022, on the Svalbard Archipelago, northern Norway. Image: Jonathan Nackstrand / AFP

Longyearbyen, Norway: Tor Selnes owes his life to a lamp. He miraculously survived a fatal avalanche that shed light on the vulnerability of Svalbard, a region warming faster than anywhere else, to human-caused climate change.

On the morning of December 19, 2015, the 54-year-old school monitor was napping at home in Longyearbyen, the main town in the Norwegian archipelago halfway between mainland Norway and the North Pole.

Suddenly, a mass of snow hurtled down from Sukkertoppen, the mountain overlooking the town, taking with it two rows of houses.

Selnes' home was swept away 80 metres (263 feet). The room where he was sleeping was completely demolished amid "a scraping sound like metal against a road".

To avoid being buried under the snow, he grabbed onto a ceiling lamp.

"It's like I was in a washing machine, surrounded by planks, glass, sharp objects, everything you can imagine", recalls Selnes.

He survived, suffering just scrapes and bruises. His three children, who were in another part of the house, were unhurt.

But two neighbours—Atle, with whom he played poker the night before, and Nikoline, a two-year-old girl—lost their lives.

The accident, which had been unthinkable in locals' eyes, sent shockwaves through the small community of under 2,500 people.Also read: Ukraine war casts a chill in Norwegian Arctic town

"There's been a lot of talk of climate change ever since I came... but it was kind of difficult to take in or to see," author and journalist Line Nagell Ylvisaker, who has lived in Longyearbyen since 2005, tells AFP.

"When we live here every day, it's like seeing a child grow—you don't see the glaciers retreat," she says.

In Svalbard, climate change has meant shorter winters; temperatures that yo-yo; more frequent precipitation, increasingly in the form of rain; and thawing permafrost—all conditions that increase the risk of avalanches and landslides.

In the days after the tragedy, unseasonal rains drenched the town. The following autumn, the region saw record rainfalls, and then a new avalanche swept away another house in 2017, this time with no victims.

"Before there was a lot of talk about polar bears, about new species, about what would happen to the nature around us" with climate change, Ylvisaker explains, adding: "The polar bear floating on an ice sheet is kind of the big symbol".

The string of extreme weather incidents "was really an eye-opener of how this will affect us humans as well".Also read: Snowmobiles in slush? Sports on thin ice in the warming Arctic

After the two avalanches, authorities condemned 144 homes they considered at risk, or around 10 percent of the town's homes, and installed a massive, granite anti-avalanche barrier at the foot of Sukkertoppen.

It is an ironic turnaround for Longyearbyen, which owes its existence to fossil fuels.

The town was founded in 1906 by US businessman John Munro Longyear, who came to extract coal. It grew up around the mines in a jumble of brightly coloured wooden houses.

Almost all the mines are now closed, the last one due to shutter next year. An enormous sci-fi-like hangar of trolleys towers over the town, bearing witness to its past as a mining town.

Now it is human-caused climate change that is making its mark on the landscape here.

According to Ketil Isaksen, a researcher at the Norwegian Meteorological Institute, the Svalbard region is "the place on Earth where temperatures are rising the most".

In the northernmost part of the Barents Sea where the archipelago is located, temperatures are rising five to seven times faster than on the planet as a whole, according to a study he co-authored and recently published in scientific journal Nature.

Why? The shrinking sea ice, explain scientists. It normally acts as a layer of insulation preventing the sea from warming the atmosphere in winter and protecting the sea from the sun in summer.Also read: How Russia is cashing in on climate change

In Longyearbyen, thawing permafrost means the soil is slumping. Lamp posts are tilting and building foundations need to be shored up because the ground is shifting. Gutters, once unnecessary in this cold and dry climate, have started appearing on roofs.

On the edge of town, people used to snowmobile across the now not-so-aptly named Isfjorden (Ice fjord), which hasn't frozen over since 2004.

Even the famed Global Seed Vault, designed to protect the planet's bio-diversity from man-made and natural disasters, has had to undergo major renovations after the entrance tunnel bored into a mountainside unexpectedly flooded.

At the offices of local newspaper Svalbardposten, chief editor Borre Haugli sums up the region's climate change: "We don't discuss it. We see it".by Pierre-Henry DESHAYES

Tweets by @forbesindia
Escaping the survival trap
No petrol, no cars: Why Cubans are turning to electric transport