The new study in the journal Environmental Science and Technology Letters identified a plume from an oil and gas production platform in the Gulf of Mexico that spewed some 40,000 tonnes over a 17-day period in December 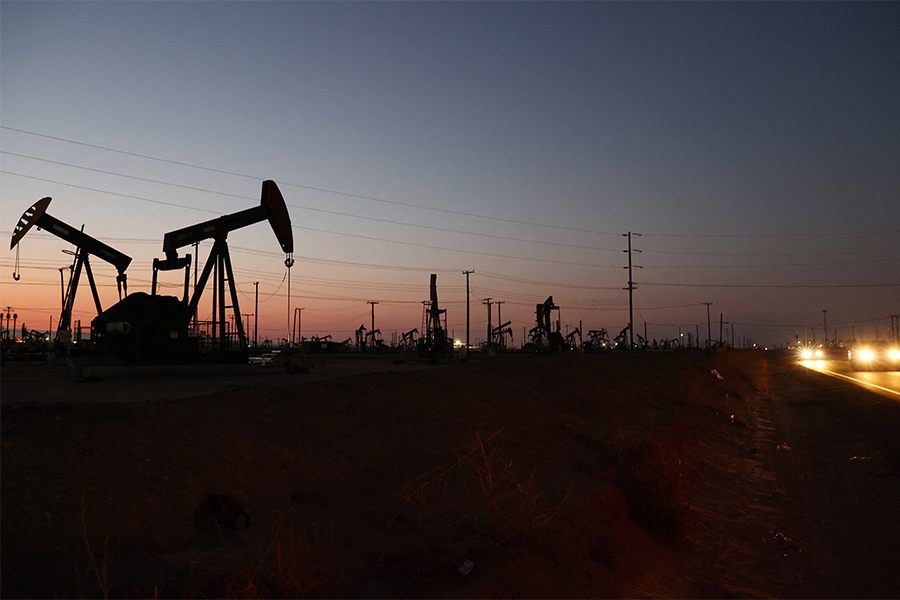 Cars pass near pumpjacks in the Belridge oil field near McKittrick, California. In California, 35,000 oil and gas wells sit idle, many of which are unplugged and could leak methane gas. Scientists estimate that one-third of human-induced global warming is caused by methane. (Photo: MARIO TAMA / Getty Images via AFP)

Paris, France: Scientists have for the first time used satellite data to detect a major offshore leak of the potent greenhouse gas methane, according to peer-reviewed research.
The findings add a crucial tool to an expanding space-based arsenal for pinpointing previously invisible methane plumes from the oil and gas industry.
Fossil fuel operations globally emitted about 120 million tonnes of the planet-warming gas in 2020, nearly one-third of all methane emissions from human activity, according to the International Energy Agency (IEA).
The new study in the journal Environmental Science and Technology Letters identified a plume from an oil and gas production platform in the Gulf of Mexico that spewed some 40,000 tonnes over a 17-day period in December.
The platform, near Campeche in southern Mexico, is in one of the country's biggest oil producing fields.

"Our results demonstrate how satellites can detect methane plumes from offshore infrastructure," senior author Luis Guanter, a professor at Valencia Polytechnic University, said in a statement.
"It opens the door to systematic monitoring of industrial emissions from individual offshore platforms."
Satellite-based methods for spotting methane leaks over land have developed rapidly in the last few years, training an uncomfortable spotlight on regulators and industry.
But equivalent techniques have been lacking for leaks from offshore oil and gas operations, which account for about 30 percent of global production.

Up to now, ocean water's capacity to absorb short-wave infrared radiation has limited the amount of reflected light reaching space-based sensors.
Guanter and colleagues overcame this problem with a new method for measuring solar radiation bouncing off the water's surface, called Sun-glint observation mode.
Methane is responsible for roughly 30 percent of the global rise in temperatures to date.
While far less abundant in the atmosphere than CO2, it is about 28 times more powerful as a greenhouse gas on a century-long timescale. Over a 20-year time frame, it is 80 times more potent.
Methane lingers in the atmosphere for only a decade, compared to hundreds or thousands of years for CO2.
This means a sharp reduction in emissions could shave several tenths of a degree Celsius off of projected global warming by mid-century, helping keep alive the Paris Agreement goal of capping Earth's average temperature increase to 1.5C, according to the UN Environment Programme (UNEP).
Last year saw a record jump in the atmospheric concentration of methane, US government scientists reported in April.
Methane is generated by the production, transport and use of fossil fuels, but also from the decay of organic matter in wetlands, and as a by-product of livestock digestion in agriculture.
At last year's COP26 climate summit in Glasgow, more than 100 nations agreed under the Global Methane Pledge to reduce emissions 30 percent by 2030. But several major methane emitters—including China, Russia, Iran and India—failed to sign.
By Marlowe HOOD
© Agence France-Presse

Tweets by @forbesindia
America's inflation is at a four-decade high. Here's what you need to know
Stepping stones to building and scaling start-ups in a digitized world