Rajinikanth: Who Really Is the Super Star?

Two decades after he opted out of an indifferent run in Hindi films, Rajinikanth conquered Bollywood in his own way in 2010. The Robot set the box office on fire, reaffirming his super star status 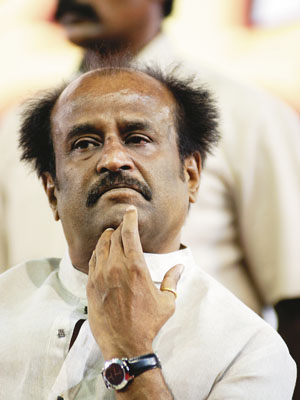 Had he wanted, Raja Bahadur could have been a very famous man. But he chose to live in obscurity for something bigger. He guards his privacy so fiercely that it proves quite difficult to find his house in Chamrajpet, the jewel of Bangalore old town. After a spirited search, we zero in on a non-descript, three-storey building along a narrow, roller-coaster lane. The retired bus driver welcomes us and shows us where he lives — a tiny one-room portion with an attached bathroom. Once there, he offers that quintessential flavour of South Indian hospitality — filter coffee.

We can’t believe we are with superstar Rajinikanth’s best friend.

Just a few days earlier, at the height of the Endiran-Robot mania, the legendary actor had made a sudden visit to this house. Even as millions of fans fawned over his pictures and giant cut-outs across the country, Rajinikanth quietly left the rain-soaked streets of Chennai and landed in Bangalore. There, he called Bahadur, his erstwhile colleague from a previous career as bus conductor. The actor told his friend he was going to spend a few days in Bangalore, visiting temples and unwinding. Would Bahadur join him?

Bahadur made time to join the man he knows as Shivaji Rao Gaekwad, the most stylish conductor ever to issue a ticket. One day, they went to a temple. There, sitting in a corner, Rajinikanth narrated the storyline of his next movie. He then looked into the eyes of his friend and asked what he thought of the plot. Is there anything that needs to change in the scenes? Here was India’s biggest mass hero, a one-man film industry, asking for feedback like someone who had just got a break in the movies.

Bahadur couldn’t help thinking about how far they have come. The journey had started nearly 40 years ago, on the bus service between Majestic and Srinagara. “He was fast,” Bahadur says as we sit down for a chat. “When giving tickets in a bus, he used to start at one side, and before you knew, he was on the other.”

It was that energy that made Bahadur believe that Gaekwad was not made for being just a conductor. He knew his friend loved to act. “Our shift started at 6 a.m. and ended at 2 p.m. Every day, sometime in the evening, he used to come to my house. My mother served us fresh milk in large tumblers. We had a cow in our house, and in those days, tumblers used to be big. Even recently, when he spoke about my mother, he remembered the large tumbler. After that, we used to go for drama practice.”

The vivacity shone through, on and off stage. Rajinikanth’s mannerisms attracted of passengers who became his fans on the route. And on stage, he always stole the thunder. “He was not trim as he later became. He was fat and he had a lot of hair on his head. But he had the style, the confidence. Even when he was in one corner, it seemed as if he occupied the whole stage.”

And then, there was his roar of laughter.

In one of the most loved scenes in Endhiran, Rajinikanth’s robot character laughs mockingly at the other Rajnikanth, a scientist who created it. The villain’s body vibrates as the guttural spontaneity rattles the eardrums. Even for long-time Rajini fans, it was a novel experience.

But Bahadur had heard that long ago, in one of the plays they had put up in Bangalore in the 1970s. There, the future superstar played the role of Duryodhana, the king of the Kauravas. Just like the Robot of 2010, Duryodhana had mocked his rivals. It had left Bahadur wondering if his friend wasn’t making a mistake by not making a dash for Madras, the capital of South Indian cinema. And the good driver had resolved to help him live his dream.

Today, Rajinikanth lives under many layers of impressions, stories, images, analysis, myths and, more recently, innumerable Internet jokes — Rajini can plug the Wikileaks, goes one of them. On the day of a Rajini movie release, everything takes a backseat in Tamil Nadu, and increasingly in other movie markets. Fans bathe his cut-outs in milk, propitiate the gods by offering the hair on their heads, burst crackers, dance on the streets and pay thousands of rupees for a ticket to the first show. Film critics rave about his charisma and magnetism.

Rajinikanth isn’t good-looking in the conventional sense. Neither does he bother to keep up his superstar image. For him, his star status is like a false moustache to be worn when playing a part and removed when living his life. The bald pate, rubber slippers, dhoti folded up above the knees — that’s the real man.

In the 1970s, the odds were against Shivaji Rao Gaekwad ever becoming a Tamil film star. For starters, he didn’t know the language. The passion for language runs deep in Tamil Nadu and that could have been a major handicap for this Maharashtrian who also spoke Kannada. And the first ever movie frame he appeared in carried an ominous subtitle ‘Abaswaram’ (off-key) and he played a negative cameo.

It was sheer chance that he even got thus far. He was noticed in a Kannada play at the Film Institute in Chennai, by none other than director K. Balachander. “Learn Tamil,” the director told Rajini before leaving. And there has not been a better career advice in Chennai’s film industry before or after.

The next time Rajinikanth was in Bangalore, he insisted Bahadur speak to him only in Tamil. “He picked up the language very fast,” his friend remembers.

Balachander offered him a small role in Apoorva Raagangal (1975), which had Kamal Hassan in the lead. But few failed to notice the dark man with a mop of hair, showing such attitude in such few seconds. Director S.P. Muthuraman, who watched the movie, was impressed. Later, when he was looking for an actor to play a small part in his movie, he remembered Rajinikanth. “When I saw him walking towards me, I changed my mind. He had that kind of presence. I didn’t want to give him a small role. I wanted to see him as a hero in my next movie,” he says.

But Muthuraman’s Bhuvana Oru Kelvikuri (1977) turned out to be an exception for a while. Rajinikanth’s unconventional, devil-may-care looks meant he mostly got to play the villain, which he did with gusto.

The origins of ‘punch dialogues’, for which he became so famous, can be traced to his days as a villain. In 16 Vayathinile (1977), he would do a mean thing and check with his friends “Idhu eppadi irukku?” The same punch line made a comeback in another Rajini movie years later. “Howeezzit?”

For Bahadur, who has watched every one of Rajini’s movies, nothing can equal Badshaa. In it, Rajini plays an autorickshaw driver — helpful, devoted to family, averse to violence. But he has a past: He had been a feared don in Bombay. But history and enemies catch up with him, transforming his character from a peaceful guy to an action hero, a piece of dynamite that punches with the weight of a locomotive.

One of the first things Rajinikanth did on that Bangalore trip in November was to ask for his favourite non-vegetarian food prepared at Bahadur’s place. He came and ate with everyone. “There is no need for him to do that. He can afford to have food in a five star hotel every day. He is so big. He need not talk to me. He need not call me his friend. But he does,” Bahadur says, his voice choking for a moment.

“A couple of years ago, we went on a trip. That day happened to be my birthday. Rajinikanth threw me a surprise party. He said, ‘The world might want to celebrate my birthday. But I will celebrate yours’.”

In fact, there are things that Rajinikanth envies about Bahadur. “Oh, he is envious of my hair. When I seem to be taking special care of it, he would ruffle it and say, ‘What, are you showing off?’.”

Bahadur is Rajinikanth’s only hope of living the ordinary life he once did. “He was once a poor man. Very poor. He used to carry luggage on his shoulders for 50 paise. He has struggled a lot. He doesn’t want to forget that.”

Show More
Get the latest stories, videos, and podcasts from Forbes India directly in your inbox every Saturday
Thank you for your comment, we value your opinion and the time you took to write to us!
Comments 29

Tweets by @forbesindia
7 Interior Designers and Architects to Watch Out For
Dilip Shanghvi: A Rocky Road to His Target